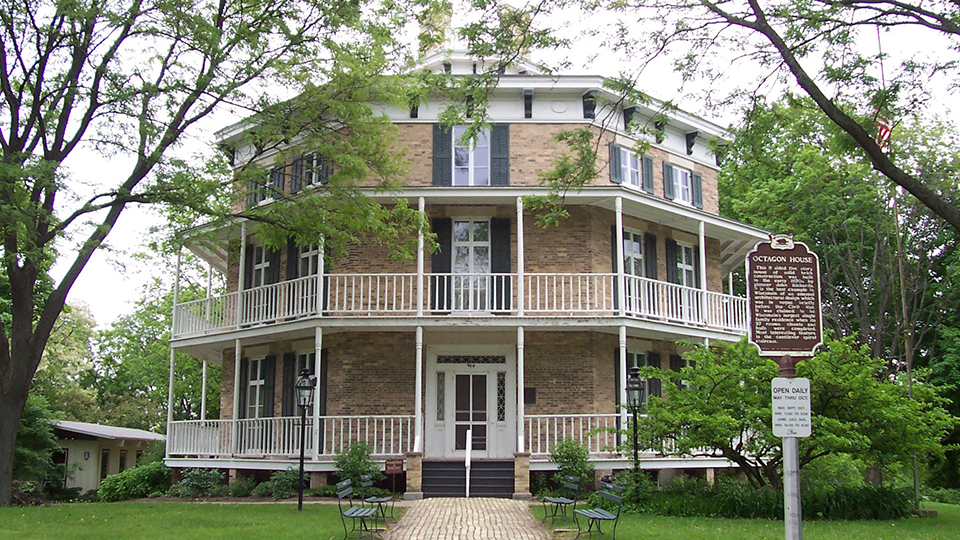 Photo: Octagon House, ca. 1845, 919 Charles Street, Watertown, WI. It was listed on the National Register of Historic Places in 1971. Photographed by User:Iulus Ascanius (own work), 2003, via Wikimedia Commons, accessed May, 2021.

The American contribution to innovative house styles in the mid 19th century was inspired by Orson Squire Fowler's creative octagonal architectural design. He felt that "the beauty of the octagon form itself" was enough, and that little exterior decorative details were needed; however, many were built with some decorative exterior details influenced by other architectural styles. He felt that improvements within the structure were more important; such as, gravel walls (poured concrete), board walls consisting of lumber scraps, centralized heating, and indoor plumbing. Fowler believed that the octagonal design was more economical to build, cost less to heat, and provided more light and ventilation than four-sided buildings.

This design is easily identified by its eight-sided exterior walls. Other features include low-pitched hipped roof, wide eave overhangs, eave brackets, and raised basements. Most are two-story structures (some three-story). Windows are of equal size and placement. Most Octagons have a verandah or porch encircling the house. About half have an octagonal cupola, belvedere, or roof deck. Cupolas were built to provide all rooms with light and ventilation.

Built mostly in New York (particularly the Hudson Valley), Massachusetts, and the U.S. Midwest, the design was considered rare, but at least a thousand or so were originally built. The inventory of extant Octagon Houses continues to dwindle.