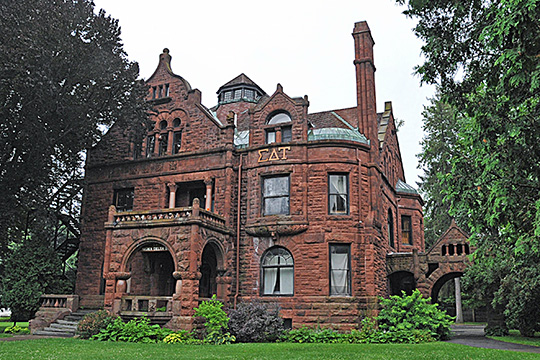 The Tompkins Street/Main Street Historic District was listed on the National Register of Historic Places in 1982. Portions of the content on this web page were adapted from a copy of the original nomination document. [1]

The residential area is made up of two and two and one-half story houses, ranging in style and scale from modest vernacular structures of the 1830s to the imposing mansions of 1890-1916. While most of the houses are of wood frame construction with shingle, clapboard, or stucco exteriors, some of the most noteworthy are brick or stone. The houses are closely spaced, but the wide streets, broad front lawns, and sensitive landscaping provide a sense of spaciousness.

Most buildings in the commercial area are deep brick blocks, three and four stories high, and three to six bays wide. Generally built between 1860 and 1910, they reflect the various architectural fashions of that period, ranging from the simple rectilinear patterns of the early Italianate style, through the exuberant eclecticism of the High Victorian period, to the relative austerity of modern styles. Many commercial buildings display ornamental brick arches, panels, pilasters and corbelling, while others are ornamented with stone lintels and sills, metal cornices, terra-cotta tiles, or entire facades of stamped metal. Nineteen non-contributing modern commercial structures, generally lower and simpler in design, are also included within the Tompkins Street/Main Street Historic District boundaries.

The Tompkins Street/Main Street Historic District is both architecturally and historically significant. It incorporates two important early roads — Tompkins Street, leading southwest to Ithaca, and Main Street, the route north to the older village of Homer — and includes the area of the city's first settlement and businesses. The combined residential and commercial district represents the growth and economic development of the city, deriving its distinctive character from the period of post-Civil War industrial expansion. The prosperity of that period is reflected in the rows of fashionable brick commercial buildings which line Main Street and Central Avenue and in the luxurious residences on Tompkins Street. A broad range of nineteenth and twentieth century architectural styles is represented, including outstanding examples of Italianate, Victorian Gothic and Chateauesque architecture.

This economic growth was accompanied by rapid population expansion. In the twenty years following incorporation, the village population doubled; it doubled again in the 1880s. In 1900, Cortland became an incorporated city, with a population of over nine thousand. At this time, Main Street was the major corridor between the residential area on the north side of the village and the industries to the south. Economic and population growth stimulated construction and modernization of business blocks on Main Street. Public transportation used this route beginning in 1882 with a horse-car, replaced by the electric street railway in 1895. Railroad Street (renamed Central Avenue in 1939) originally led east to the Syracuse and Binghamton Railroad from Church Street. In 1884, it was extended westward to join Main Street, and within a few years the massive Grand Central Complex (13-29 Central Avenue) dominated the new block. Tompkins Street, a wide avenue close to the business district, was chosen as a place of residence by many of the city's prominent business and professional men. As the city prospered, older structures on the street were torn down or moved to make way for stylish new homes of a size and fashion compatible with financial success.

The Tompkins Street/Main Street Historic District includes a broad range of American architectural styles beginning with the Federal style, represented by the Roswell Randall House (7 Clayton Street). The Elisha Morgan House (7 Reynolds Avenue), with magnificent Palladian windows, is also an outstanding example of the Federal style but was moved to its present location from Otsego County, c. 1916-17. The Greek Revival style is exemplified by several modest residences including the Henry Randall House (18 Tompkins Street).

The well-preserved Gothic cottage at 16 Owego Street, with its elaborate scrolled bargeboard, is the Tompkins Street/Main Street Historic District's only example of this style. The vault and chapel (1908, 1922) at the rural cemetery are later versions of the Gothic Revival style. Italianate design is represented by many of the commercial blocks, including the Old Bank Block (51-55 Main Street). Many of the residences also display Italianate detailing. The present YWCA (14 Clayton Avenue), although somewhat altered, is the Tompkins Street/Main Street Historic District's best example of Italian Villa architecture.

The community's increasing wealth and sophistication during the post-Civil War period is reflected in the more stylish and imposing buildings of the late nineteenth century. As architects and architectural pattern books replaced master builders as designers of buildings, the local vernacular gave way to national fashions. Similarly, improved transportation and mechanical manufacturing techniques encouraged the use of non-local building products such as brick, stamped metal cornices and storefronts, stained glass and terra cotta tile. Large brick blocks reflecting the eclectic fashions of the late nineteenth century predominate in the commercial district. The richest blending of details occurs in the Beard (7-9 Main Street), Wickwire (23-29 Main), Garrison (17-19 Main), and Cortland Standard (106-110 Main) buildings, all of which display the polychromy characteristic of the Late Victorian Gothic style. The Roman-Flemish stepped gable of 31 Central Avenue, and the elaborate Queen Anne oriel window at 44-46 Main Street are also noteworthy architectural features. Four stamped metal facades manufactured by the Mesker Brothers firm of St. Louis survive intact in the historic district at 2-8 Main Street, 12 Main Street, 33-35 Central Avenue, and 83-85 Main Street.

The architectural fashions of the late Victorian era are also well represented in the residential area, in both high-style and vernacular versions. The most notable example of the Queen Anne style is the Fitzgerald House at 39 Tompkins Street. The Chateauesque style, associated in the 1880s with America's wealthiest families, is represented in Courtland by 37 and 55 Tompkins Street, homes built for Chester and Theodore Wickwire, the city's most prominent industrialists. Also notable from this period are adjacent Shingle style houses at 16 and 12 Tompkins Street and the dramatic French-inspired Harry Wickwire house at 64 Tompkins Street.

The various forms of turn-of-the-century classicism are well represented in the Tompkins Street/Main Street Historic District. Outstanding examples of Georgian Revival domestic architecture are concentrated at 41, 45, 50, and 60 Tompkins Street. The Charles C. Wickwire home at 29 Tompkins Street, designed by the Elmira architectural firm Pierce and Bickford, combines features of the Georgian and Second Renaissance Revivals. The heavy massing and clean lines of the later NeoClassical Revival are seen in the Post Office (88 Main Street), the Old First National Bank building (35 Main), and the Cortland Savings Bank (1-5 North Main).

The twentieth century brought a taste for clean geometric massing and light colors. Several designs on Main Street — 31, 89, 103, and 105 — exemplify the transition, having the height of the earlier styles but the simple lines, wide windows and light-colored brick of the new fashion. Architectural styles that are more strictly modern in tone are represented in the Tompkins Street/Main Street Historic District as well, most notably in the streamlined store at 64 Main Street and the Brutal style bank at 36 Main. While all buildings less than fifty years old have been identified as non-contributing, it is likely that in time many will be recognized as distinctive examples of period architecture which illustrate the twentieth-century history of the Tompkins Street/Main Street Historic District.

Modernization of older structures has occurred in some cases. A few residences have received artificial siding and/or have lost decorative detailing. A majority of the storefronts have been changed to some degree and a few older commercial structures have been altered to twentieth-century tastes by removal of upper floors. Most buildings less than fifty years old are compatible with the historic buildings in terms of scale, design, and materials. The few modern buildings that are visually intrusive are of modest size and do not have a substantial impact on the streetscape.

Since 1978, a city ordinance has protected the historic buildings of the Tompkins Street/Main Street Historic District from demolition and unsuitable alterations. Many commercial buildings have been rehabilitated, and there is a continuing effort by the Downtown Business Association to retain the district's historic ambience. On Tompkins Street, many mansions have been successfully converted for multi-family housing, office space, or public uses. Although the Tompkins Street/Main Street Historic District is marked by losses and changes of modern times, it retains the distinctive character of a prosperous small city of the early twentieth century.

Kurtz, D. Morris. Past and Present; A historical and descriptive sketch of Cortland, N.Y. Binghamton, Republican book and job print, 1883.