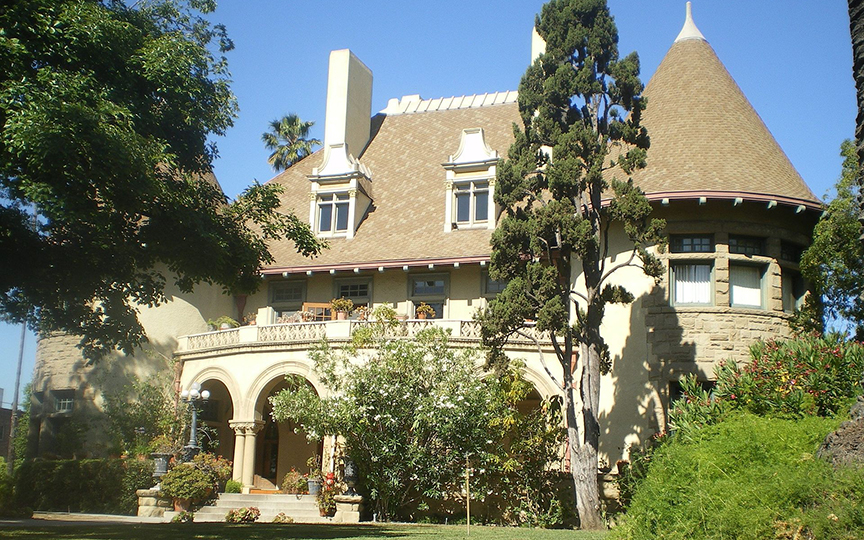 The Chateauesque [†] style, also known as the neo-French Renaissance style, is characterized by large, steep-roofed masonry structures composed of a mixture of medieval and renaissance elements inspired by the chateaux of the Loire Valley in France. Around the turn of the 20th century, houses of this style were considered to be expressive of cultural refinement and noble lineage, making them especially appropriate for the new millionaire, America's version of royalty.

The large size and expensive masonry construction of these structures did indeed limit them to the upper classes. Contributing to their rarity was the difficulty of successfully integrating so many diverse elements in a picturesque, asymmetrical fashion. Only the most talented architects attempted such a task, most notably Richard Morris Hunt, the designer of "Ochre Court" (1892) in Newport, Rhode Island, and "Biltmore" (1896) [photo, above], near Asheville, North Carolina.

The form and dissemination of the Chateauesque style in Southern California was somewhat different from that of the rest of the country. On the East Coast and Midwest, the style was most popular in the design of large, single family houses between 1890 and 1910. While there are several Victorian era mansions in the Los Angeles basin which draw upon the Chateauesque style, their clapboard and shingle cladding belie the true nature of the style—which requires stonework. One such building, located in the Westlake area of Los Angeles, is an 1896 wood frame and clapboard house. The Ringe House in the West Adams area of Los Angeles is a later, more authentic example of the Chateauesque style. Designed in 1906 by Frederick L. Roehrig, the house, with its stone exterior, has the monumental stature associated with the style. An important example of the style, as applied to an institutional use, is the Mary Andrews Clark Memorial Home, a YWCA building dedicated in 1913.

With the exception of these isolated, earlier examples, the style did not gain popularity in Southern California until the 1920s. It was most frequently used in the design of luxury apartment buildings, as illustrated by the Villa Riviera. The highest concentration of 1920s Chateauesque style apartment buildings is in Hollywood, with fine examples in the adjacent areas of Hancock and West Hollywood as well. Lesser examples of Chateauesque apartment buildings were two or three stories in height with wood frame construction and stucco finish. More significant examples, such as the Villa Riviera in Long Beach, were four to sixteen stories in height with reinforced concrete or steel frame construction—with brick, cast stone, or stucco finish. Roofs were also likely to be finished in more expensive material such as slate or copper. Important examples which still stand include the Chateau Marmont, a residential hotel in Hollywood built in 1925; Chateau des Fleurs, an apartment building in Hollywood built in 1927; La Fountaine, a 1928 apartment building in West Hollywood; and El Royal, constructed in 1929 in Hancock Park.

Of these examples, the Villa Riviera stands as the largest, and perhaps the purest, example of the style in Southern California. The Villa Riviera exhibits the most important characteristics of the Chateauesque style with its steeply pitched hipped roofs, multiple dormers, vertical orientation, stone-like exterior, and pinnacle.