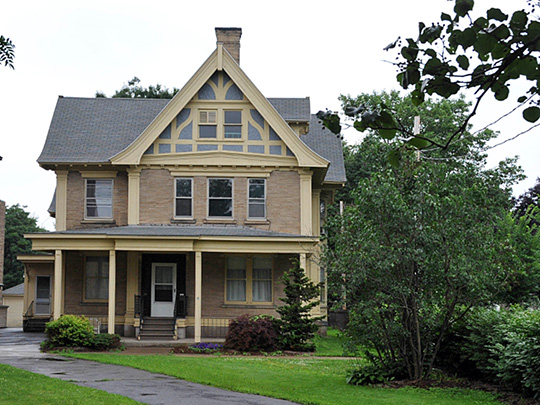 Cortland, situated at the foot of a hill near the forks of the Tioughnioga River, was first settled in 1798 by Jonathan Hubbard. Originally known as Hubbard's Corners, it was an undistinguished settlement until it was chosen as seat of the newly established county of Cortland in 1810.

Designation as the county seat ensured the destiny of the small settlement and sparked immigration. Among the enterprising merchants attracted to Cortland were Roswell and William Randall who came from Madison County about 1812 and built a store on the northeast corner of the important road junction at Main, Tompkins, and Port Watson Streets. At first, the village was a market town for the surrounding agricultural area, but soon small industries arose to serve the farmers. Paper, wool-carding and cloth-dressing mills, a nail factory and a pottery were among the early industries.

Geography and the early settlement patterns determined Cortland's street plan. Main Street began as a trail through the woods from Homer to the little community. At the base of the hill, this north/south trail joined two important highways: Tompkins Street leading southwest to Ithaca, and the eastern road leading to Port Watson on the Tioughnioga River. In the period 1810-1840, Main Street consisted of two blocks between the present Groton Avenue/Main Street/Clinton Avenue intersection on the north and the Tompkins Street/Main Street/Port Watson Street intersection on the south. From the beginning, it was largely a commercial street, although a few residences, including some of the most elegant ones, were built there. Taverns and, later, hotels marked the terminals of Main Street, with shops and stores in between.

On the southern end, on what is now the southeast corner of Main and Port Watson Streets, was Luce's Tavern, founded about 1822. This later became the Eagle Tavern, then the Messenger Hotel, but has been the site of a gas station since 1936. Opposite this hotel on Main Street was the large Eagle Store, dating from 1820 but remodeled as the Squires Block in 1883. As much as possible, the hill area was avoided, and by 1825 the clerk's office and courthouse had been relocated on the plain. At this time, Tompkins Street began to develop as a prestigious residential area, starting with construction of the Henry Randall House (1834) at 18 Tompkins Street.

Cortland's growth continued, primarily to the east and north as large land holdings delayed development to the south and in the vicinity of Courthouse Hill. A major civic improvement in 1848 was the construction of a plank road on present day Main Street, beginning near the Tompkins/Main/Port Watson Street intersection and continuing north to Syracuse. In 1853, Cortland became an incorporated village. The following year, the Syracuse and Binghamton Railroad was routed through the eastern part of the village, stimulating industrial development in that area.

Rapid growth did not occur in the village, however, until after the Civil War with the development of local wagon-making and wire industries. The three banks chartered between 1864 and 1869 provided easier credit for entrepreneurs, and the railroads opened the community to national markets. One of the largest firms was Wickwire Brothers, manufacturers of drawn wire and wire products, which employed 1,000-2,000 workers in peak years. When the Ithaca and Cortland Railroad (ultimately part of the Lehigh Valley System was laid through the southwestern part of the village in 1872, it stimulated the relocation of the Wickwire mills to South Main Street and development of new industries in the vicinity.