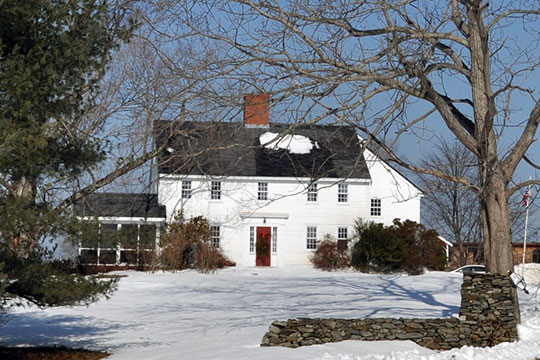 The Smith's Corner Historic District was listed on the National Register of Historic Places in 1983. Portions of the content on this web page were adapted from a copy of the original nomination document [‡]

The area is named for the Smith family who were prominent in South Hampton's 19th century development. The architectural character of the Smith's Corner Historic District is established by a cluster of four dwellings anchoring the corners of the intersection of Main Avenue and South Road. These dwellings, constructed in the mid-nineteenth century, are in the Greek Revival style and include gable front orientation and sidehall entries.

The density of development found along Smith's Corner proper (intersection of Main Avenue and South Road) reflects the commercial origins of many of its structures. During the mid-nineteenth century the area was noted for its concentration of taverns and associated services trades which supported the stage trade. Representatives of these surviving Greek Revival style structures is the Smith House, historically known as the Central House Tavern (Site 184). Anchoring the northwest corner of the intersection of Main Avenue and South Road, this building includes later Gothic Revival and Italianate style detailing.

Originating as an early nineteenth century agricultural section, the Smith's Corner Historic District became an important commercial center associated with the stage trade by mid-century. The Greek Revival architectural character is determined by four examples of the style which anchor the intersection of Main Avenue and South Road. Two of these structures, the George Goodwin House (c.1845) and Center House Tavern are documented as operating as taverns during the nineteenth century.

As such, these structures were part of an active commercial tavern trade which flourished in the town. Perry's local history comments on local tavern licensing policies: "Liquor licenses were granted freely and from 1820 to 1828, the town record shows licenses were granted to Richard White, Elihu French, Angeline Brown, Thomas J. Goodwin, Toppan Sargent, Parker Merrill, Joseph Stewart, Dorothy Brown, Richard Carrier and others, as follows: 'The Selectmen of South Hampton do approve of ________ as a person suitably qualified to exercise the business of a tavern and retailer of spirituous liquors at his house and shop. We do therefore grant him full power and license to exercise said business, and to sell rum, wine, gin or other spirits by retail, that is in any quantity less than one pint.'"

Exemplifying agricultural development in the area is an intact example of a beautifully maintained farm complex, the Moses Eaton House (c.1750) which includes a two-and-one-half story Georgian dwelling, connected barn, detached barn and outbuildings, and remnants of the original orchard.