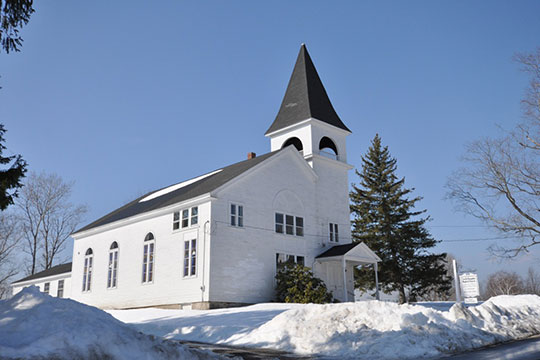 The Town Center Historic District was listed on the National Register of Historic Places in 1983. Portions of the content on this web page were adapted from a copy of the original nomination document. [‡]

The area includes the municipal core of South Hampton as represented by a stylistically cohesive, Greek Revival style complex of public structures oriented towards an open town green, Barnard Square. These public structures are the Town Hall, the Barnard School and the Baptist Church. The town center core also includes two cemeteries which contribute to the historic character of the area through reinforcing the boundaries of the municipal core and providing additional public space.

The architectural character of residential development surrounding the town center proper, is in large a result of the 1912 "Hilltop Fire," which destroyed many of the early residential structures adjacent to the town green. Sympathetic residential construction dating from the early- and mid-twentieth centuries has subsequently occurred in the areas affected by the fire. Later construction maintains historical low-scale and density. The existing ratio of early structures (50 years or older) to modern buildings is 3 to 1.

The Town Center Historic District presents an intact microcosm of South Hampton history centered on Barnard Square. A group of late eighteenth and early nineteenth century houses constitute the architectural evidence for the original farming community, while the Greek Revival grouping of Baptist Church, Barnard School, and Town Hall reflects the prosperity and modernity of the town in the first half of the nineteenth century. In addition, views of the agricultural landscape remain essentially unchanged. The Town Center retains architectural and site integrity relating to the most significant periods of South Hampton history and should be preserved as a superb built and natural record thereof.

The Town Center Historic District includes the physical and symbolic center of South Hampton. This center is represented by three cohesive Greek Revival style public buildings: the Baptist Church, the Barnard School, and the Town Hall. Constructed in the 1830's, during the town's period of peak prosperity, these structures reflect the major intellectual and social concerns of the period. The nineteenth century character of the town center is reinforced, through intact, open vistas visible from all directions. These vistas, preserving original agricultural land divisions, tangibly document the town's historical agricultural economy which made possible the construction of its municipal core.

Associated farm dwellings, dating primarily from the Georgian and Federal periods, surround the town center and relate in scale, orientation and materials to the center proper.

Representative of these early dwellings is the Israel Sawyer House (Main Avenue, c.1765) an unusual "double" 2-1/2-story double house begun as a traditional five-bay, double pile Georgian farmhouse. The original exterior design was duplicated to the west of the principal block in the nineteenth century. This mirror addition possibly dates to the Greek Revival period as suggested by interior detailing.