Photo: Cabins on Dublin Lake, Town of Dublin, NH. The Historic District was listed on the National Register of Historic Places in 1983. Photographed by User:Magicpiano (own work), 2012, [cc-by-3.0 (creativecommons.org/licenses/by/3.0)], via Wikimedia Commons, accessed August, 2014. 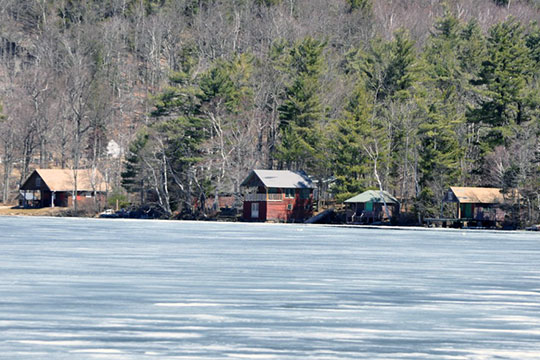 The Dublin Lake Historic District was listed on the National Register of Historic Places in 1983. Portions of the content on this web page were adapted from national register nomination documentation. [‡]

The Dublin Lake Historic District embraces the area surrounding Dublin Lake and extends along, the Old Marlborough and Old Harrisville Roads. It contains some 45 architecturally and historically significant buildings (plus compatible outbuildings and some 10 contributing small boathouses), forming a homogeneous collection of late-19th and early-20th century resort architecture. The buildings with a few exceptions were constructed as summer "cottages" between the late 1870's and the mid-1920's. The Victorian era Shingle style and the Georgian Revival style predominate, both in vernacular forms and in more elaborated variants drawn from historical sources. While some of the houses have been "updated" (for example, shingle surfaces painted white), few have undergone major alterations, other than conversion to year-round use. (About half are now year-round residences.) The Dublin Lake Historic District is entirely residential, except for the Dublin Lake Club (c.1901 — Lake Road East) open in the summers only, the small seasonal lakeshore bath and boathouses, and the small 18th century Eli Morse Grist Mill.

This last named structure is among the few contributing exceptions to the Dublin Lake Historic District's summer cottage architecture. The others are the 1822 brick Morse Homestead at "Outlet Farm" and its complex of outbuildings, the adjacent small frame Peter Morse farmhouse (18th c.), and the 1831 brick Gleason-I.D. White farmhouse (Lake Road West).

The Dublin Lake Historic District comprises what is commonly regarded as the most scenic area of Dublin, with spectacular views of Mount Monadnock, its foothills, and the lake itself. The area is heavily wooded with indigenous hardwoods and evergreens, and most of the houses are located in the woods and on the slopes at irregular distances back from the roads. They are nearly all sited for maximum privacy and for picturesque views of the lake and mountain. Few are fully visible in summer. There are intervals of open rolling fields on the west side of the lake and along the Old Marlborough and Old Harrisville Roads.

The density of the Dublin Lake Historic District is irregular, varying from the widely-spaced properties (of almost estate-like proportions) on large acreage, mostly on the west, to the more modest cottages, on 2 or 3 acres, largely on the east and south.

The Dublin Lake Historic District also includes trails to Mount Monadnock, which commence within the area; walled and formal gardens adjacent to some of the houses (though most of these are now abandoned, simplified or reduced in scale); the outdoor Italian theatre (Teatro Bambino) at Loon Point; and a dam at the outlet of the lake.

There are presently no architectural intrusions in the Dublin Lake Historic District, but N.H. Route 101 bisects the district and runs the length of the north shore of the lake. The heavy traffic it has generated in recent years unquestionably constitutes an intrusive effect on what was heretofore a secluded place of quiet sylvan beauty.

The Dublin Lake Historic District comprises the heart of the Dublin summer colony which developed and flourished from c.1875 to the onset of the Great Depression, c.1930. It is set in an area of remarkable scenic beauty on the hilly approaches to Mt. Monadnock, and contains an exceptional collection of well-preserved late-19th and early-20th century summer cottage architecture, much of it the work of nationally known architects. Furthermore it is identified with many notable figures in American literary, political and artistic life who summered here in the period. Despite the recent intrusion of heavy traffic on State Route 101, the alteration of some buildings and the loss of others, the Dublin Lake Historic District retains today the physical characteristics and much of the ambiance of its period of greatest significance. (It continues to attract a permanent though somewhat reduced summer population, and most of the "winterized" houses are occupied by families of former summer residents.)

Until the last quarter of the 19th century, the Dublin Lake Historic District was almost entirely agricultural, consisting of a handful of large widely-spaced farms around the lake and its access roads. Of these farms, only 3 remain: the Peter Morse Cottage (1793); the brick Federal-Greek Revival Gleason-I.D. White Farmhouse (1831); and the Federal style, hipped-roof, brick Morse Homestead (1822) at Outlet Farm. The last also comprises what is possibly the earliest surviving building in Dublin now the 1-story frame west wing said to have been build c.1760 by Alexander Scott. The Morse Homestead, opened to summer boarders in 1857, is also the Dublin Lake Historic District's only surviving building identified with the thriving summer boarding house period (c.1850-1880) which preceded and led to the development of the permanent summer colony.

The Dublin Lake Historic District's overriding importance is manifested in the concentration of summer cottage architecture perhaps unequalled in the state.

Although the first summer cottage of 1872 (built on the north side of the lake by Mrs. J.C. Copley Greene) is no longer standing, the earliest phase of this architecture is represented by nearby Flint Cottage (1878 — Old Harrisville Road) in a simple vernacular style and Greek Revival in feeling. The earlier portions of the neighboring Shingle style Crowninshield-Lowell House (1878-83 — off Old Harrisville Road), built the same year, also reflect this phase, as does the main block of "Redwood Cottage" (c.1873-74 — Old Marlboro Road).

From this small nucleus on the lake's north side, the summer colony expanded rapidly during the decade of the 1880's. Its first impetus came in 1882 by the sale of the large Phillips Farm (almost the whole south shore) to Mrs. Greene, who that year began building the summer cottages that were to become known as the "Latin Quarter." The Latin Quarter, named for its concentration of artists and writers, reflects the local vernacular style in its earliest dwellings (e.g., "Hill Cottage" 1882 — Lake Road South), but the architecture quickly evolved into characteristic Victorian Shingle style modes as the decade progressed. Among its builders and leaders were author-musician Margaret Pearmain Osgood (1882 and 1890 — Lake Road South); painter-naturalist Abbott H. Thayer (1888 - house now gone); Col Thomas Wentworth Higginson, the literary biographer (c.1890 — Lake Road East); the artist Joseph Lindon Smith at Loon Point (begun in 1890 — Lake Road South); and explorer-geologist Raphael Pumpelly.

After a lull in building activity during the 1890's due to economic depression came a resurgence at the turn of the century and lasting for a decade. This period introduced a more cosmopolitan architecture, often on a grand scale and characterized by historically correct detailing from Classical, Renaissance and Tudor sources. It is apparent in such examples as the elaborated and picturesque Shingle style of "High Wells" (1899 — off Old Harrisville Road); or J.L. Mauran's "Homewood" in the Shingle style with Tudor and Gothic motifs (1901 — Lake Road West).

The Georgian Revival style, fully fledged, and with Italian Renaissance overtones appears in Joseph Lindon Smith's Loon Point house of 1903 (Lake Road South) and in the architect Charles A. Platt's beautifully integrated and proportioned D.K. Catlin House (c.1889 — off Lake Road North), one of three Platt houses in the Dublin Lake Historic District. (Of almost pure Italian Renaissance inspiration is Raphael Pumpelly's stucco and pantile roofed Studio of 1912, designed by Walter Atherton on the periphery of the district.)

The introduction of a more cosmopolitan architecture was accompanied by a more diverse and cosmopolitan summer population. The period from 1900 to the First World War may be regarded as Dublin's high point as a summer resort, certainly in terms of the group of notable (now historical) figures it attracted. In addition to such earlier pioneer colonists as Pumpelly, Higginson, and the artists J.L. Smith, Abbott Thayer and George deForest Brush, the roster reads like a "Who's Who," among whom were Mark Twain, President Taft, cabinet officers Franklin MacVeagh and E.A. Hitchcock, the British, German and Japanese ambassadors and their entourages, Amy Lowell, Jane Addams, William James, John Singer Sargent, Henry Adams, and Isabella Stewart Gardner. There were many other notable artists, writers and public figures. Many of them built or owned summer cottages, others leased them for a season or more.

Although wealth provided the underpinnings of this society, especially after 1900, it was to a large degree an "aristocracy of merit" rather than money, based on a mutuality of interest primarily in the arts, literature and scholarship among congenial people, many of whom were accomplished in their own right and had achieved recognition in their own fields. While the cultural tradition continued after the First World War, it never matched the vitality or brilliance of this period. If architecture is an indicator, it is noteworthy that, no great summer houses on a large scale were built in the Dublin Lake Historic District after World War I.

The architecture of the post-World War II period, comprising approximately 17 new summer and year-round houses (non-contributing due to their recent construction) tends to reinforce the already established patterns of summer colony development, both in quality of architecture (most of the new houses are by talented contemporary architects), and their ownership largely by families long associated with Dublin.

The small boat and bathhouses (some of which can be classified as noncontributing) are relatively large in numbers, but are so small in scale often hidden by trees and their dark surfaces blending into the wooded landscape that they are inconspicuous in the overall context of the Dublin Lake Historic District.

Exempted properties comprise three houses that were moved: on Lake Road South, the Peter Morse Farmhouse (1793) part of the overall Eli Morse farm complex moved in 1926 but retaining its architectural integrity and compatibly sited; on Old Marlboro Road, "Redwood Cottage," (c.1873-74) last moved over 80 years ago, but this factor outweighed by its importance as the oldest surviving structure associated with the summer colony, and retention of its basic architectural integrity; and on Mauran Lane (off Lake Road West), "Pinehurst," (1886) moved about 1900, but fully retaining its unaltered Shingle style appearance in a thoroughly compatible setting.

The Dublin Lake Historic District's cultural heritage, in combination with its outstanding scenic and natural qualities, and above all its remarkable architectural legacy, give it a place of unique significance in New Hampshire, if not the entire New England region.