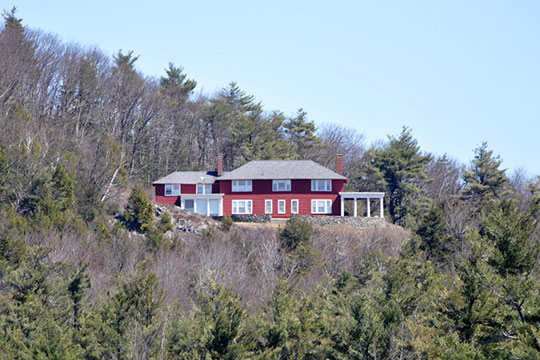 Dublin was granted in 1749 as "Monadnock No. 3" or "North Monadnock" by the Masonian Proprietors to 40 individual owners, of whom the largest landowner was Dr. Matthew Thornton (later signer of the Declaration of Independence). The town as granted (including the southern half of the present town of Harrisville, which remained part of Dublin until 1870), was divided into 220 lots, none of which were settled by the original grantees, although Thornton's brother, Colonel William Thornton, became the first settler about 1752. He did not remain, however, for fear of Indian attacks, and the site of his habitation, on the east side of Hancock Road, is marked today with a plaque and a stone pile.

The next settlers arrived in 1760, a small band of Scotch-Irish pioneers, of whom only one, Henry Strongman, remained permanently, soon to be joined by other families from Sherborn, Massachusetts. Strongman's house, on the Peterborough Road (probably dating from this pre-Revolutionary period, and those of the Sherborn settlers Thomas and Eli Mores on the Old Marlborough Road, and west wing of the Morse-Spencer house are among the oldest surviving houses in Dublin. The naming of the town, when it was chartered in 1771, is attributed to Strongman's birthplace in Dublin, Ireland, but possibly equal influence were the Irish origins of Dr. Thornton, Dublin's largest grantee.

By 1775, on the eve of the Revolution, population had increased to 305, and the settlement, although still primitive, had developed rapidly. The east-west "Great Road" or "County Road" was first laid out in 1762, and branches to Jaffrey and Packersfield (Nelson) soon thereafter.

Almost from the beginning Dublin was a community of small, largely self-sufficient family farms, many of them laid out in long rectangular tracts with frontage on the "Great Road" or its branches. As the inhabitants increased, small supporting enterprises were established; after the saw mills and grist mills came smithies, tanneries, wheelwrights, brick kilns, wooden ware and other small scale manufacturing establishments, as well as taverns which appeared mostly along the main east-west road.

Dublin is one of New England's richest small towns, topographically, historically, architecturally, and culturally. The town's natural setting on the wooded approaches to Mount Monadnock, its healthful climate, the deep, clear waters of Dublin Lake, and splendid views of the mountains and surrounding countryside attracted as summer visitors, from the post Civil War period on, notable artists and writers as well as many persons prominent in American political, cultural and intellectual life. As a result, Dublin retains a nationally significant collection of summer colony architecture (many of the buildings designed by architects of national reputation, representing late 19th and early 20th century resort styles. It also has a well-preserved streetscape, village center, and the architectural styles of a late 18th and early 19th-century rural New England Town.