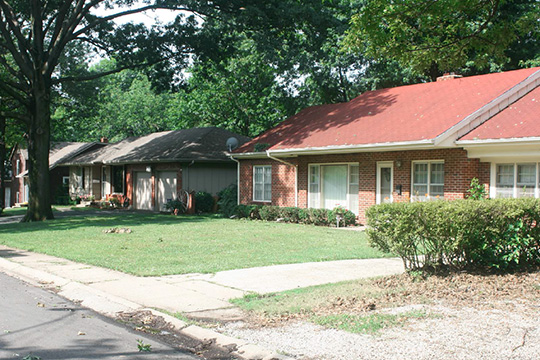 The Bayles Addition Historic District was listed on the National Register of Historic Places in 2013. Portions of the content of this web page were adapted from a copy of the original nomination document. [‡]

The Bayles Addition Historic District is located in an exclusively residential area west of the central business district in the City of Lee's Summit in west-central Missouri, 20 miles southeast of Kansas City. This district consists of a 29-acre parcel that was platted in 1948 as the Bayles Addition to the City. Among the 101 buildings in the district, 95 are contributing and 6 are non-contributing. Contributing elements are those which date from the 1948-1965 period of significance and retain integrity. The Bayles Addition Historic District is topographically flat, with well-tended yards and mature shade trees. All streets in the district are asphalt-paved and street lighting relies on lighting units mounted on utility poles.

The Bayles Addition consists of a preponderance of Ranch-style houses and Minimal Traditional homes and a small number of Colonial and Tudor Revival-style domestic architecture. The houses in the district are typically one story in height and have low-pitched hipped or side-gable roofs finished in asphalt shingles. Many roofs have chimneys located on the gable ends or on the interior slopes of the roofs.

Many of the houses in the district have front porches which extend along all or part of the facade of their respective buildings. Some porches are recessed beneath an extension of the main roof. In several cases, porches employ arcaded support systems and in a few cases modern wood porches are present.

Typical of the 1940s-1950s years of the district's principal development, a great many houses have integral garages located at one of the gable ends. Some of these are 1-bay in width and some are of two bays. Associated outbuildings include detached garages which appear to date from within the period of significance, some which appear to post-date the period of significance, along with several utilitarian sheds of indeterminate age and usage.

The district is a well-preserved example of a post-World War Two suburban residential subdivision, laid out with specific building size and construction cost requirements as well as racially-driven ethnic restrictions which, in the minds of the original developers, assured a non-diverse ethnic character on the part of those who would own homes in the district.

The District was originally part of the holdings of orchardist James A. Bayles, whose business went by the name "Western Missouri Orchard." Bayles (1834-1916) came to Lee's Summit in 1870 and established a 120-acre pear orchard, which he continued to operate after relocating to Kansas City in 1891. He acquired the 1854 home of pioneer Josiah Hargis (1820-1881), a 2-story 3-bay central passage house with an Italianate-style bay window on one side. After James Bayles' relocation of Kansas City, his son, Allen Downing Bayles (1864-1945), who had come to Lee's Summit as a youth, operated the orchard. After A. D. Bayles' death the property was offered for sale and a development corporation, the Bayles Addition Development Company, acquired a 66-acre tract from the orchard. In November, 1947, they sold off the buildings on the tract, including an apple house, a chicken house, a horse barn, a hog house, and a cooperage. In February, 1949, the Hargis-Bayles house was demolished to clear the way for the new development.

The Bayles Addition Development Company (also referred to as the Bayles Development Company) was incorporated in October, 1947 and was capitalized at $35,000. The company consisted of five shareholders, each of whom held twenty shares and constituted the company's board of directors. C. Russell Acuff was the president and George E. Rhodes served as vice president. They were joined on the board by W. F. Stafford, Walter G. Nichols, and George H. Walburg. The shareholders left their imprint on the neighborhood in the naming of Warns Street.

The plat for the Bayles Addition was recorded at the Jackson County Court House on June 23, 1948 and the subsequent development of this subdivision would occur during the decade of the greatest increase in the city's land mass (through annexation) and in population ever seen in the community; census data records that in 1950 the population stood at 2,554 and in 1960 at 8,267. The company wasted no time in beginning construction. By early March, 1949, six houses had been completed. The development company began to hold open houses and to advertise the homes for sale in the local newspaper. A characteristic advertisement touted the new neighborhood as being in "the beautiful Bayles Addition" and noted that the model home was a "modern home completely furnished, just to show you its 'livability.' You'll love it! Even if you aren't thinking of a new home, we want to show you this one—we're proud of it." Sales seem to have proceeded briskly. A typical transaction noted in the local newspaper was that of Bill and Hope Schneider, who moved from California to work at the Unity School of Christianity and bought a new house in the Bayles Addition.

A characteristic transfer is the 1951 conveyance from the development company to David and Irene Hughes. The Hugheses agreed to pay the Bayles Addition Development Company $300 for their lot, in monthly installments of $25 per month payable to the Bank of Lee's Summit, at an interest rate of eight percent. The deed appeared over the seal of the Bayles Addition Development Company, over the signatures of C. R. Acuff, President and George E. Rhodes, Secretary.

In addition to those homes built on speculation by the development company, individuals such as the Hugheses purchased building lots and built their own homes as well. Among the earlier was Mrs. Irene Henson, whose new house at 203 Southwest Mission Road was completed in April, 1951. Other new homes in the neighborhood recorded in the newspaper were 313 Southwest Lakeview Street, built for William McKee, and the house at Southwest Fourth and Southwest Lakeview Streets, noted as being completed in February, 1952. Door-to-door mail delivery to the new neighborhood began in May, 1952; mail had previously been dropped at the end of a pre-existing route.

The Bayles Addition Development Company continued to build speculatively. In February, 1954, the local newspaper reported that the Blooser Construction Company of Topeka, Kansas, would be building fifty-four new homes as rentals in the southern reaches of the Bayles Addition along Southwest Madison, Southwest Walnut, and Southwest Highland Streets. Each house would have three bedrooms and an attached garage and would rent for $85 per month.

The district consists of a carefully planned neighborhood with surveyed building lots, setback restrictions, and utility easements. In addition to these planning tools, each buyer was bound by a declaration of covenants that was recorded with the individual deed and ran with the land until 1978, whereupon they would be renewed in ten-year increments and would remain in effect unless a majority of the property owners in the subdivision voted otherwise. The covenants included:

A significant attempt to ethnically engineer the neighborhood was set forth in the section of the covenants which stated "No persons other than those of the Caucasian race shall own, use, or occupy any of the said lands or any of the buildings thereon except that this covenant shall not prevent occupancy by domestic servants of a different race domiciled with an owner or tenant." In many areas of the country such racially-driven restrictions were not uncommon and were even upheld in the courts, even though in 1948—coincidentally the year that the Bayles Addition was laid out—the United States Supreme Court ruled that such restrictions were not enforceable. In reality, it would not be until the passage of the Civil Rights Act in 1968—twenty years after the Bayles Addition was laid out—that equal housing opportunities became the law of the land.