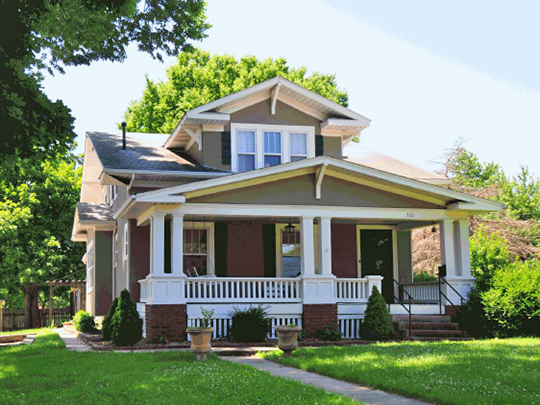 The Southeast Third Street Residential Historic District was listed on the National Register of Historic Places in 2010. Portions of the content on this web page were adapted from a copy of the original nomination document. [‡]

The District lies east of Southeast Grand Avenue and west of Southeast Howard Avenue in an area three blocks east of East Main Street and the Missouri Pacific Rail Road tracks in Lee's Summit's downtown commercial area. All but one of the properties face onto Southeast Third Street; a single property faces onto Southeast Grand Avenue. The District is one of a series of residential enclaves in a five-block area surrounding the commercial downtown between Central Street on the west and Beacon Avenue on the east that, due to their historic architectural integrity, communicate shared architectural and community development associations. Residential development patterns in Lee's Summit mirrored those of railroad towns established in Western Missouri in the mid-nineteenth century. Distinguishing characteristics of this pattern were a commercial center that flanked the rail lines, with residential development fanning out to create neighborhoods surrounding the commercial center. Like all rural railroad market centers, key roads and streets connected with the county road system, providing wagon access to the railroad lines. Douglas Street, which runs northwest-to-southeast two blocks west of the west boundary of the District, ran parallel to the rail lines to the east and was historically the most significant north/south connector street in Lee's Summit. Formerly called "Hearne Street" north of Vine Street, it is and was an extension of "Lee's Summit Road," which ran north from Lee's Summit to the Jackson County governmental seat in Independence, Missouri. Early on, residential development occurred along Douglas Street in the area north of the downtown commercial area and spread along side streets adjacent to Douglas Street.

The homes within the District include a variety of architectural styles and National Folk House building forms that reflect a continuum of single-family domestic design that spans the early twentieth century era of residential development in Lee's Summit. The contributing buildings date from circa 1908 to circa 1946 and retain physical forms and architectural elements that reflect the design trends popular during the time of their construction. Most of the contributing houses are wood frame and are one to two-and-a-half stories in height. Architectural styles of contributing resources include Late 19th and Early 20th Century American Movements' Bungalow/Craftsman style and the Modern Movement's Minimal Traditional style. In addition, a number of houses reflect the Bungalow/Bungaloid, American Four Square House, and Massed-Plan, Side-Gabled National Folk House forms. As a grouping, the majority reflect local adaptations of popular pattern book style.

Southeast Third Street and Grand and Howard Avenue, parts of which include the District, are part of a grid pattern that runs in a true north-south, east-west grid that corresponds with the land survey grid laid out by compass points oriented by section, township, and range. This orientation is different from Lee's Summit's nineteenth century neighborhoods adjacent to the downtown commercial area where the streets run parallel to the Missouri Pacific Railroad line, which runs in a northwest-southeast direction. Thus, the orientation of the District's streets reflects its rural development outside the city limits in the nineteenth century and twentieth century subdivision dates after annexation.

The District's origins as a residential neighborhood were part of a larger pattern of development that occurred after the 1905 annexation of the area surrounding the downtown commercial center. The 1905 annexation expanded the corporate limits of Lee's Summit to the size of approximately one square mile. Between the 1905 annexation and the end of the residential building boom of the 1920s, developers in Lee's Summit platted four additions between 1907 and 1910, and filed three more plats between 1923 and 1929. Because there were relatively few periods of rapid community growth, large-scale block-by-block speculative development was not an important part of Lee's Summit's community development patterns prior to World War II. Instead, carpenters and contractors erected houses for their clients on vacant lots, sometimes among already existing houses. With the exception of important civic buildings, master carpenters and masons contracted by property owners designed the buildings in Lee's Summit. Both the residential and commercial buildings erected in the community in the late nineteenth and early twentieth centuries reflect the presence of competent tradesman and were strictly "builders' vernacular," most often based on plan book designs and the local carpenter's preferences.

Based on historic maps and subdivision records, the District appears to have evolved through the subdivision of farmsteads containing nineteenth century single-family residences. The farmer or developer platted uniform 60 foot single and 120 foot double lots. They demolished the nineteenth century farmhouse to make room for smaller houses to be situated on the lots. Farmer John T. Lacy purchased acreage at the southeast corner of Southeast Third Street and Grand Avenue in 1889. In 1908, he subdivided his property to create the Lacy Addition. The addition initially included seven lots fronting on Southeast Third Street. Lots 2 through 6 were further subdivided so that the resulting streetscape contains nine lots instead of the original seven (401 through 417 Southeast Third Street). Between 1904 and 1911, George Gibbons accumulated ownership of the property on the north side of the 400 block of Southeast Third Street and platted 60 foot wide lots. He initially sold some of the lots but retained ownership of other lots until 1931.

This pattern reflected a shift in the size of middle-class residences in Lee's Summit and other communities beginning around 1910. The presence of early twentieth century Craftsman and Colonial Revival style free classical bungalows in the District reflects a nationwide trend in housing. These smaller houses indicate a decrease in the square footage in homes to absorb the increased cost of technological improvements such as indoor plumbing and central heating and ventilating systems. They also are indicative of the decrease in the average size of the American family in the late nineteenth century from five children in 1870 to an average of three-and-a-half children in 1900. The District's American Four Square House (Prairie Box) residences reflect a shift in room arrangements to accommodate central plumbing shafts and gravity furnace ducts that resulted in fewer rooms and passageways than earlier Victorian house types.

Other factors contributing to smaller house size were the rise of a middle class that could afford to leave their rented quarters and contract directly with the home builder to erect a modest dwelling, and the advent of home financing mechanisms from lending institutions geared for the middle classes, which spurred this development. Houses built in the early twentieth century in the District included the homes of middle-class white and blue collar workers. In overall layout, scale, and size, all of these early twentieth century houses, both large and small, reflected conservative, comfortable versions of national residential preferences.