Photo: Homes in the Licking Riverside Historic District, Covington, KY. The Historic District was listed on the National Register of Historic Places in 1975. Photographed by Gregg Hume (own work), 2010, [cc-by-3.0 (creativecommons.org/licenses/by/3.0)], via Wikimedia Commons, accessed January, 2016. 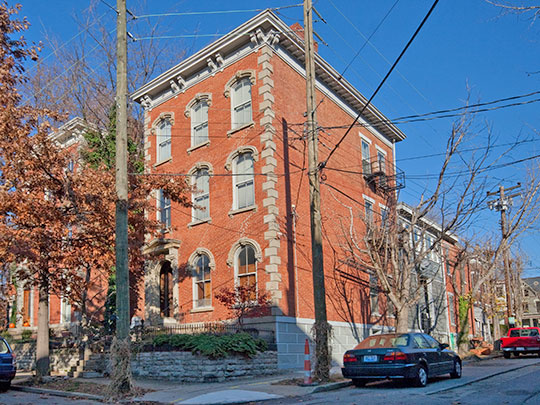 The Licking Riverside Historic District was listed on the National Register of Historic Places in 1975. Portions of the content of this web page were adapted from a copy of the original nomination document. [‡]

The original limits of the town (1815) and later the City of Covington (1834) came south of the Ohio River (the present Riverside Historic District) only to Sixth Street. Thus the earliest development in the Licking River District included urban residential development north of Sixth and relatively sparse development south of Sixth. The earliest significant building in this "rural" portion of the district was the large and solid brick residence (ca. 1846) used by Dr. William Orr as the site of his fashionable female academy (later the Rugby School). Its original grounds took in all the land between present-day Sixth and Seventh Streets and Sanford Street and the Licking River.

The majority of development during the 1850s and 1860s lies along Greenup Street the length of the district and Sanford north of Fifth. It was a combination of substantial private homes and a degree of speculative development (largely by Amos Shinkle). Jonathan Hearne established his elegant home on Garrard at the eastern terminus of Fifth in the early 1870s. This was followed up through the turn of the century by the construction of numerous other imposing residences north and south along Garrard and on Sanford south of Sixth. Sporadic residential infilling continued until the 1930s.

The district has throughout the last century retained a remarkable degree of uniformity of use and resistance to demolition and inappropriate intrusions. It has been almost totally spared the scattered commercial and light industrial establishments which have proliferated in most other older residential areas of the city. It has continued almost exclusively in residential and institutional use.

Until the second or third decades of this century the residences housed a sizable portion of the professional and commercial elite of the community. Included among them were attorneys, judges, doctors, bankers, leading merchants, industrialists, a U. S. Senator, a Congressman, and the parents of President U. S. Grant. Their position and wealth was reflected in the elegance and substance of the district's architecture.

The institutions which located among the homes are notable both for their number and durability. Among the more prominent are the First Methodist Church, LaSalette Academy, the Covington Art Club, the Baker-Hunt Foundation, and the American Red Cross. While similar establishments throughout the city have closed or withdrawn to the suburbs by the score in recent years, these have not only remained but undergone continuing restoration and improvements. It has been largely owing to their continued commitment to their neighborhood that the area has been able to retain the vitality to stimulate the initiation of residential restoration in the 1970s.

Architecturally, the Licking Riverside District consists of substantial residences with a few institutional buildings whose scale essentially respects that of their residential environs. There are large mansions, double and rowhouses, apartment buildings, and the appropriate coachhouses and garages. The styles range from austere late Federal or Greek Revival through flamboyant Second Empire Baroque and edgy High Victorian Gothic to the bulky restraints of the early 20th-century bungalow and Georgian Revival. Although brick is the major exterior construction material, there is a great variety of stone and wood trim, pressed brick, terra cotta, shaped shingles, colored and cut-slate roofs, wrought and cast iron cresting, railings, and balconies, colored and leaded glass. All these details are characteristic of late 19th-century enjoyment of both hand and machine craftsmanship. In spite of this diversity and inventiveness, however, there is a general consistency of scale and a sense of substantial, but not overweening pride (even the Hearne House on its egregious site creates its effect through mere presence, not overt attention-getting devices). A number of the dwellings are obviously speculator-built. Many of the designs show a considerable degree of sophistication, perhaps owing to Covington's proximity to the "Queen City," Cincinnati, across the Ohio River. But, like Covington as a whole, the Licking Riverside area has a distinct character, difficult to summarize, but intensely interesting.