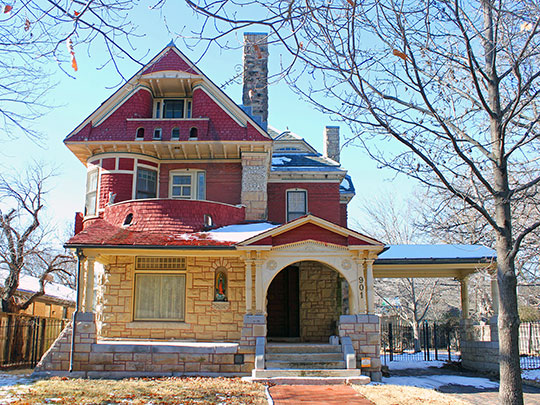 Riverside Cottage (the Thomas Fitch House) was listed on the National Register of Historic Places in 1989. Portions of the content on this web page were adapted from a copy of the original nomination document. [‡]

Riverside Cottage (ca. 1887-1888) is located at 901 Spaulding Avenue in Wichita, Sedgwick County, Kansas (pop. 279,835). The two-story, brick, limestone, and wood Queen Anne / Romanesque Revival house stands in the Riverside Addition as one of the first structures built in the newly annexed area. Most of the residences standing in the Riverside Addition were constructed during the 1910s and 1920s. It was not until the 1960s that the prominent corner siting of the Riverside Cottage was substantially obfuscated by the construction of a narrow, one-story yellow brick house at the corner of Franklin and Spaulding Avenues, essentially cutting off the north view. Riverside Cottage has an eastern facade orientation, measuring approximately thirty-two feet from north to south and sixty feet from east to west. Sadly, the building has been gradually deteriorating since at least the 1950s but for most intents it does retain its architectural integrity.

Riverside Cottage is associated with the growth of Wichita during the boom period of 1886-1887 and with businessman Thomas G. Fitch.

Wichita experienced a tremendous real estate boom in 1886 and 1887, due in part to the industrial subsidies offered by the city government. Between Spring, 1886 and Spring, 1887 one thousand eight hundred and seventy-one new residences, one hundred commercial buildings, twenty-two factories, eleven hotels, and four hundred and thirty-six miscellaneous buildings were constructed in Wichita. In 1887, the year that the Riverside Cottage was built, Bradstreet's Report listed Wichita third among those American cities that had experienced the greatest number of real estate transactions during the first five months of the year. Wichita's population soared to 40,000 people during the boom but by 1889 the city could no longer afford to subsidize industry and the population began to dwindle. The bust was foretold somewhat in Marshall Murdock's famous February, 1887 editorial "Call a Halt," in which he criticized the outside additions craze, which had resulted in enough platted land to support a population of 300,000.

During the boom, outlying areas of the city like Riverside, College Hill and Fairmount were platted, streetcar lines were built out to them, and some houses of grand design were constructed, all to attract more investment in the city. As part of this phenomenon, Thomas G. Fitch (1861-1938) and his brother-in-law James O. Davidson (1850-?) organized the Riverside Land Company, with the purpose of selling homesites along Wichita's Arkansas River. To stimulate building in the new subdivision, Fitch and Davidson organized the Riverside and Suburban Railway, the city's first electric streetcar, and built large and imposing residences for themselves. Fitch's Riverside Cottage, designed by Proudfoot and Bird, Davidson's non-extant Kirby Castle, and the Campbell Castle are representative of the house types constructed during the speculative phase of the Riverside neighborhood. The bust of 1890 fairly ended the Riverside Land Company's dreams, few riverside castles besides those mentioned were built in this neighborhood until the next major building booms of the 1910s and 1920s.

Fitch is classified as a boomer, moving to Wichita from Chicago with his family in 1886. It does not appear that he invested badly or exploitatively; he became involved with an investment house and a number of railway companies and water works companies. Fitch earned a law degree from the University of Michigan in 1882 and practiced law in Chicago prior to moving to Wichita. In Wichita he became the treasurer of his brother-in-law's firm, Davidson Investment Company, the investment brokerage house that was the parent firm for the Riverside Land Company. He served as manager of the Riverside and Suburban Railway from 1887-1890, as general manager of the Wichita Electric Railway Company from 1890-1893, as general manager of the Larned Water Works from 1887-1893, and as general manager of the El Dorado Water Works from 1892-1904. Fitch became politically active with the Democratic party, serving as a delegate to the 1892 Democratic convention in Chicago and in 1894 he was appointed Postmaster of Wichita by President Grover Cleveland, a position he held until 1898. Fitch lived at Riverside Cottage until 1895 but continued his involvement in the growth and development of Wichita until his death in 1938, serving as the president of the Western Pacific Tea Company from 1903 until 1927.

Proudfoot and Bird were a prominent local architectural firm during Wichita's boom period of the mid-1880s and were the major proponent of the Romanesque Revival in the city. Willis Proudfoot (1860-1928) came to Wichita in 1885 from Foster and Liebbe in Des Moines, Iowa. The 1886 Wichita City Directory lists George Bird (1854-1953) as Proudfoot's partner. Their first commission was the Administration Building at Garfield University (now Friends University), (NR 1971). During their five years in Wichita, the firm designed seventy buildings, of which only nine are extant. They were responsible for twenty-two commercial buildings, two public buildings, twelve schools, five churches, and twenty-nine residences, including the Riverside Cottage. When Wichita's boom ended in 1890, Proudfoot and Bird left Wichita for Salt Lake City, leaving behind a city made rich by the infusion of Romanesque Revival architecture. In The Spirit of H.H. Richardson on the Midland Prairies: Regional Transformations of an Architectural Style, Paul Larson describes the Wichita work of Proudfoot and Bird as somewhat antithetical to Richardsonian design tenets. They used Richardsonian devices as a means of giving height and variation to their buildings, reacting against the horizontality of Richardsonian design.

Thomas G. Fitch has decided to build a residence near the corner of Spaulding and Franklin Avenues. The first story will be of stone and the second of St. Louis brick. It will cost near $8,000. Plans have been completed and work will commence at an early date.

What resulted was a house very similar to Bird's personal residence, the Aviary (ca. 1887) in the College Hill neighborhood and to A.S. Park's residence, the Fairmount Cottage (ca. 1888) in the Fairmount neighborhood. These three Proudfoot and Bird designed houses, along with Proudfoot's personal residence, Hillside Cottage (ca. 1887) probably represent the first use of the Shingle Style in Wichita, albeit an eclectic interpretation. These houses all sit on a rusticated, limestone block first floor with either wood or brick second floors. The use of shingles on the Riverside Cottage is a less dominant feature than on either the Aviary, the Fairmount Cottage or Hillside Cottage. Riverside Cottage employs slightly more elaborate detailing on its exterior limestone and brick bays than either the Aviary or Fairmount Cottage, and actually combines an eclectic integration of the Queen Anne and the Romanesque, although staying true to the floorplan and massing of the prototype design evidenced in all three houses. Riverside Cottage's size is somewhat disguised now by the narrow lot that it sits on, the side elevations reveal the expanse of the house, which is not necessarily indicated by its facade. Although somewhat deteriorated, Riverside Cottage maintains a moderately high degree of integrity from its period of significance.

Riverside Cottage is essentially an example of a Queen Anne form that has some Romanesque Revival elements integrated into its design. In the late Victorian period the mixing of surface detail to achieve a stylistic context was very common. In the case of the Riverside Cottage what rings of the Romanesque Revival influence is the rock faced ashlar stone laid up in random courses, the contrasting stone colors, the connection of the sills to the belt-courses, the conspicuous placement of the gables "so that they thrust from the wall in a continuous uninterrupted plane," and the wooden porch entry arch, which does recall the syrian arch so famously associated with the style. The hipped roof with lower cross gables is the most common Queen Anne form found in this country. Elements of the classical or free classical abound in the palladian window and its surround, the dentilled cornices and belt-courses, and the classical treatments of the interior woodwork. Additionally, the half timbering of the jerkin headed gable planes, the use of shingling on the second story, and the slate roof are all hallmarks of the Queen Anne style.