Photo: Homes in the Bitting Historic District, Wichita, KS. The Historic District was listed on the National Register of Historic Places in 2004. Photographed by User:Jeffrey Beall (own work), 2013, [cc-by-3.0 (creativecommons.org/licenses/by/3.0)], via Wikimedia Commons, accessed November, 2016. 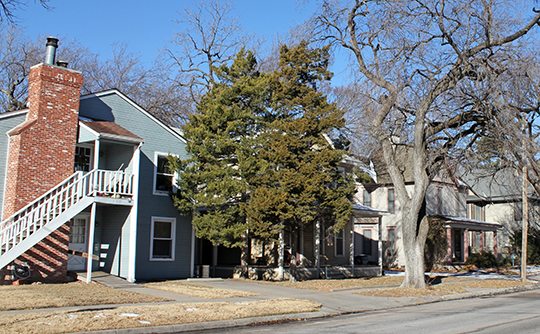 The Bitting Historic District was listed on the National Register of Historic Places in 2004. Portions of the content on this web page were adapted from a copy of the original nomination document. [‡] .

The Bitting Historic District represents a suburban streetcar neighborhood which was platted adjacent to a popular city park. The district developed during the various boom periods of growth in Wichita. The neighborhood was platted during Wichita's first boom of the 1880s; consequently, the earliest houses represent the economic "high times" of that period. The newly laid out Riverside Park proved to be an inducement for residential subdivisions to be platted further north and west of Wichita's historic commercial core. The streetcar lines provided the means to allow residents to live further from work in areas such as this. When the real estate bubble burst in 1888, there was virtually no additional construction in the neighborhood until after the turn of the century, when another growth period occurred in Wichita. The construction during the first two decades of the twentieth century nearly filled the district, although it experienced one last period of building just after World War II, when there was a critical housing shortage in Wichita.

Located in a bend of the Little Arkansas River, the neighborhood had natural barriers on the north, west, and south, and thus could not expand any further. The neighborhood contained the intersection of two streets with bridges over the Little Arkansas River, which formed a natural junction to encourage neighborhood commercial enterprises. With the development in the district spanning several decades, the housing styles/types located on these streets represent a wide time period. The district is thus also significant in the area of architecture with residences that represent the changing tastes, fashions, and construction methods in American residential architecture. The district includes several good examples of the large fashionable homes of the well-to-do during the late Victorian era, as well as the more modest National Folk type residences of the working class from the early twentieth century. There are thirty-nine contributing buildings, one contributing structure, and twenty non-contributing buildings within the district. The period of significance for the district extends from 1886, the construction date for the oldest extant buildings in the district, through 1946, when the last vacant lots in the district were developed with residential construction.

There were several factors which fostered the development of suburban neighborhoods like Bitting Avenue in Wichita. Some of these were part of nationwide trends, while others had their basis locally. These factors included: Wichita's real estate boom of the mid-1880s, in which a very high number of plats were added to the city in a short period; the streetcar lines, which provided citizens the means to live further from the city's center; amenities, such as city parks, which added to the desirability of outlying neighborhoods; an increased need for working class housing after the turn of century; and a desire for housing to be located in a more "pastoral" setting, as opposed to the gritty and noisy commercial center.

When Wichita was first settled, it was common to build residences immediately adjacent to a place of business. This was partly due to transportation issues—people needed not only to be close to work, but they also wanted to be close to any amenities found within the city as well. As Wichita grew, it no longer made sense for valuable commercial land to be taken up with small residences. Furthermore, the central part of the city became less desirable for residential living. Long after the cattle drives down Douglas Avenue were over, for example, that same street was filled day to night with farmers bringing their grain to market. Trains were constantly coming and going from downtown, and all the "rowdy" businesses were located there as well. Residential neighborhoods which were located some distance from all the noise and hubbub of the city had definite advantages.

Until residents could reach outlying neighborhoods, however, these areas were destined to lay undeveloped. By 1883, Wichita's street car lines began to encourage residential development further out from the city's center, creating "streetcar suburbs." By strict definition, neighborhoods are suburban if they are located on the outskirts of a city; i.e., "sub-urban" or "not urban." These first streetcars were drawn by horse and mule, but in 1887, the first electric line was started. That same year, Wichita had sixty miles of streetcar line. This was the beginning of residential development in the outlying areas of Wichita.

It was not unusual for the organizers of streetcar companies to also be the developers of outlying real estate subdivisions. Furthermore, these developers realized that, in order to distinguish their particular plat from others, there might need to be additional amenities. A typical inducement, used to encourage both streetcar riders or future residents, was the creation of a park or recreation area. John W. Hartzell, a streetcar developer from Topeka, had such an idea. He organized the Wichita Street Railway in 1881, and shortly thereafter purchased a large tract of land in hopes of it becoming a city park. This park, called "Riverside" by Hartzell, was to be supported at first by the street railway company and by subscriptions from Wichita citizens. The development of the Bitting residential district and the adjacent neighborhoods was an early attempt to recreate (or in this case, take advantage of) a rural lifestyle in a suburban setting.

This was due in part to the shrewd development sense of William Greiffenstein. Greiffenstein was one of the key players in promoting the commercial development in Wichita along Douglas Avenue, and the accounts of his exploits regarding that street are almost legendary. Greiffenstein was involved in real estate in other areas of Wichita besides Douglas Avenue, although his residential development prowess is not as well recognized. He recognized very early the benefits of platting residential subdivisions adjacent to city parks, even though nationwide the park movement was in its infancy. He knew what others would soon realize — that residential properties adjacent to parks and boulevards are worth substantially more than comparable properties in other parts of the city. With the newly formed Riverside Park to the south, and what would eventually become Oak Park on the west and Sims further to the west, the neighborhoods he would plat in this area should rise considerably in valuable as they became desirable residential locations.

Greiffenstein began platting several residential additions in the area of the bend of the Little Arkansas River in the mid-1880s. Greiffenstein's 10th addition was the 1100 block of Larimer, and the west side of Jefferson; the 11th addition was the 1200 block of the above streets. Greiffenstein's 12th addition, which includes the Bitting Historic District, included both the 1100 and 1200 blocks (from the river to the north side of 10th Street) of both Bitting and Carlos Avenues. This plat was filed on October 26, 1886. The 13th Addition contained the same blocks along Pearce and Forest Avenues. The lots within these additions were very small, but from the beginning, residences were constructed on two lots.

The street was named for either Charles W. or Alfred W. Bitting (or both.) The Bittings were brothers and early leading merchants in Wichita; more importantly, they were part of the "Douglas Avenue crowd" whose leader was William Greiffenstein. The Bittings were firm believers in the commercial development of Douglas Avenue, and as a result, built the first four-story commercial building in the city on the northwest corner of Douglas and Market. Perhaps in gratitude, Greiffenstein had the street in his 12th addition to the city named after the Bittings.