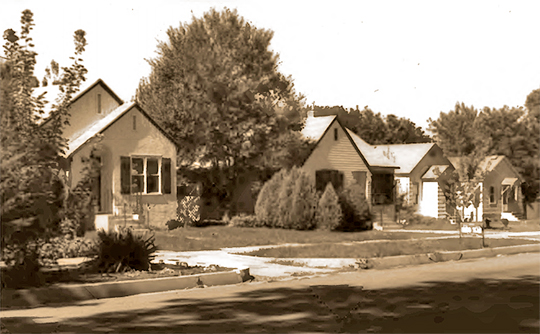 The Caldwell Residential Historic District [‡] was listed on the National Register of Historic Places in 2002.

The Caldwell Residential Historic District reflects ideals of early 20th-century Progressive influences on city beautification and suburban planning. Tree-lined boulevards and streets, parks, and stylish single-family residences within easy access to public transportation were the hallmark of this early Caldwell subdivision. Properties within the District also illustrate the influence of many popular styles of architecture, both planbook and architect-designed, from the 1890s to the 1950s. A large majority of the area's homes and streetscapes retain their essential historical and architectural characteristics and have been evaluated as contributing to a residential historic district.

The boundaries of the District include the extant residential portions of the Dorman Addition, the Washington Heights Addition, and Steunenberg's Acreage Addition, which were the first early 20th century residential developments east of the downtown business core and west of the College of Idaho (Albertson College of Idaho). These additions were adjacent to the interurban streetcar loop that encircled the Boise River Valley, and to a stub line that extended southward to Lake Lowell. (See: Streetcar Suburbs, 1888 to 1928) The portions of the additions not included in the boundaries contain properties that have been extensively altered or no longer retain their residential character.

The main thoroughfare in the residential district is East Cleveland Boulevard, which runs east-west. The street is part of the original town plat, created in 1883, although the name of Cleveland Boulevard at that time was Owyhee Street. The original townsite provided an 80-foot right-of-way for the Boulevard; the subsequent additions continued the same. The dimensions of each block in the Dorman and Washington Heights additions were 300 feet by 256 feet, divided by an east-west running, sixteen-foot alley.

Most of the blocks in the residential district were historically divided into 24 lots, twelve on each side of the service alley, each lot with a frontage of 25 feet and a depth of 120 feet. Most typically, a house was situated on two of these lots, although some parcels were 75 feet wide. The Washington Heights developers originally divided each block into only four (equal) parcels, but ultimately their development also had 50-foot frontages. The rectangular grid was a standard practice all over Idaho and many other parts of the West.

Properties within the Caldwell Residential Historic District represent many popular architectural styles, both planbook and architect-designed, from the 1890s to the 1950s. These homes exemplify how architectural trends and motifs influenced planbook designs that were more affordable to "the common man." Several houses exhibit classical architectural details mixed with traditional or vernacular plans. Variations of each major housing style is found within the District, from Queen Anne, Craftsman, Colonial Revival, Prairie School, Spanish Colonial Revival (or Spanish Eclectic), Tudor Revival, Moderne, International, and more contemporary forms such as Ranch and Minimal Traditional.

The earliest style of architecture found in the District is the Queen Anne style, popular in the United States from 1870 until 1910. Stylistic details include a steeply pitched and irregular-shaped roof, patterned shingles, wrap-around porches, and cutaway bay windows. Many late Queen Anne-style houses in Idaho exhibit classical details reminiscent of the Colonial Revival style, such as simple columns for porch supports, and the use of round and Palladian windows. Only a few modest examples of Queen Anne-influenced architecture remain in the Dorman and Washington Heights additions, indicating slow growth in the area until the 20th century. An early 20th-century, side-gabled example is the L. H. Dille house, designed by the prominent Boise architectural firm of Tourtellote and Hummel and built in 1904 at 1204 Dearborn Street. Though somewhat altered, this 1-1/2 story dwelling still retains its steep gabled roof with fancy-cut shingles in the eaves. The house also features a large gable-roofed dormer on its north facade, which also is clad with fancy-cut shingles. The north facade of the dormer includes a window with leaded-glass panes and a decorative triangular panel located above it. Small fan-shaped lights are located in the middle of the gable-end eaves (one can be seen in the streetscape photo of Dearborn St. between 13th and 12th avenues), and an altered bay is located on the building's west facade.

Modest Craftsman homes are numerous in the Caldwell Residential Historic District. Examples include the Edwin Hendon house at 1515 Cleveland Blvd. and the Arthur Binford home at 1308 E. Cleveland Blvd. The Hendon house is a 1-1/2 story, wood-framed and wood-sided house of the cross-gabled subtype. Its spare ornamentation includes knee braces in the eaves of the main section and gable-roofed, partial front porch. Most of the original double-hung sash windows are still extant, and are composed of three narrow lights in the upper sash and a single light in the lower sash. The Binford house is a one-story, front-gabled subtype, with knee braces and exposed rafters under its eaves.

Examples of larger, more elaborate Craftsman-influenced houses include the 1909 Elmer Clark house at 1402 E. Cleveland Blvd. and the I. N. Binford/Grover Knight "airplane" bungalow at 1304 E. Cleveland Blvd., built in 1918. Both also exhibit the low-pitched roofs, overhanging eaves, and one-story porches with massive supports that are the hallmarks of the Prairie School of architecture, popular from 1900 to 1920.

Two more outstanding examples of Tudor Revival houses were constructed in the neighborhood during the late 1930s. The brick Jorgensen/Stubblefield home at 1811 Cleveland Blvd., constructed in 1936 or 1937, features a recessed arched doorway and door and two steep gables on its south facade. The gabled roof over the doorway sweeps down past the roofline to buttress-like extensions on either side of the entryway. The east facade is composed of a five-sided, tower-like wing with ribbon windows in each side. Some of the windows are multi-paned. Brick lintels are located under the windows, and stepped, brick arches frame the doorway. The other front gable is clad with stucco and false half-timbering. The Glen L. Evans house at 1424 Dearborn St. includes a similar arched entryway and half-timbered end gables, but is composed of clinker brick. A massive clinker-brick chimney with corner buttresses is located on its east facade.

A few modest residences influenced by the Spanish Colonial Revival (or Spanish Eclectic) style were constructed in Caldwell during the 1930s. Spanish Revival characteristics include red tile roof coverings, low-pitched roofs, stucco wall cladding, and arched doorways or window openings. Variations of the style were built at 1811 Dearborn St. and 1501 Dearborn. The house at 1811 Dearborn St. features a shallow gabled roof covered with red tile, an arcaded entryway leading to an arched door, and wrought-iron railings across the arched openings into the entryway. A small patio area is located near the entryway. The 1501 Dearborn dwelling is a square structure with a shallow hipped roof and stucco walls. A matching hipped rooftops the arcaded entryway. Tiled, shed roofs top the windows, and decorative attic vents are located on all sides of the house.

The John and Margaret Beall house at 1815 Everett St., built between 1931 and 1936, also exhibits some features of the Pueblo Revival Style. Its flat roof with a parapet, protruding decorative tiles arching over the windows, and tile-like projections flanking the doorway reflect Pueblo-style detailing. The massive exterior chimney with its elaborate clay top is also a common feature of the Spanish Revival style.

Only two International-influenced dwellings were constructed in the Washington Heights and Steunenberg Acreage additions. They were the Howard McNeel home at 1824 Fillmore St. and the James Lyke residence at 1811 Everett St., both constructed in 1941. McNeel, owner of the local lumber company, had his employee, Harold Shaw, design his house. A wood-clad upper story projects slightly over the brick masonry first story. A cylindrical brick bay with ribbon windows is located on the first story. The house also reflects the slightly earlier Art Moderne Style, with its horizontal brick grooves and porthole window in the entryway's door. The brick masonry was not a typical wall material for either the Art Moderne or the International styles. The Lyke house, which has recently been altered, was a simplified version of the International Style. It has metal windows and parapeted flat roofs over the one-story additions that flank the two-story, hipped-roof section. It was originally clad in wood weatherboard siding, also an unusual siding choice for the International Style.

Other houses constructed in the Caldwell Residential Historic District reflected a transition from 1930s architectural styles into more contemporary forms of housing. The John (J. R.) Simplot residence at 1824 Everett St. was built sometime between 1943 and 1945. Its ornamentation represents a blending of Spanish Revival characteristics with the modern Ranch Style. The Ranch Style of residence is characterized by its sprawling, one-story design with a low-pitched roof, overhanging eaves, and an asymmetrical facade. The Ranch Style's popularity also marks changes in suburban living, with social activities occurring in the back yard and garages moved forward and attached to the side of the house. The Simplot residence includes all of these characteristics, along with some Spanish Revival detailing. Decorative iron grillwork frames the windows and comprises the porch supports. The house's smooth stucco walls are also based on Spanish Revival precedents. A private outdoor area, akin to a partial courtyard, is located to the rear of the house.