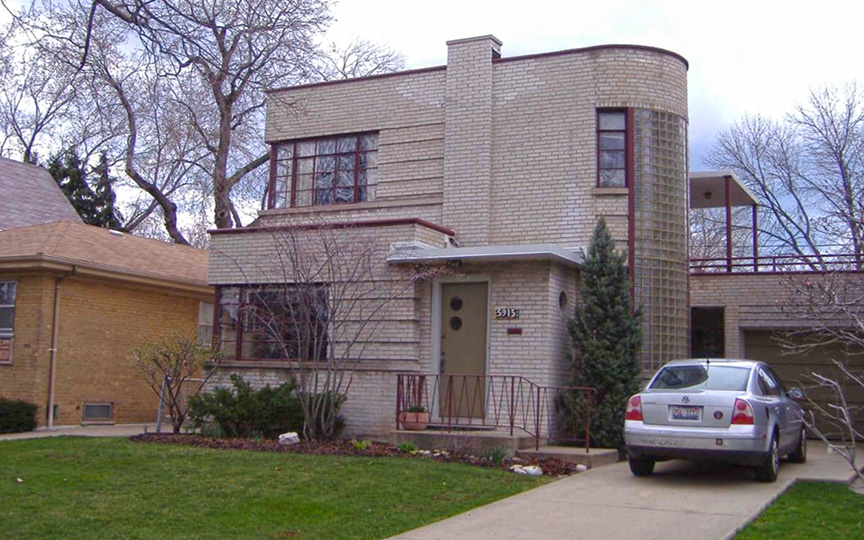 The Minimal Traditional style is recognized as a popular architectural influence that reaches prominence in the mid-to-late 1920s and lasting until the mid-to-late 1950s. The style may have been influenced by the preference for stripped-down detailing and smoother surfaces of the Art Moderne and other early Modernist movements. Minimal Traditional-influenced houses are notable for their minimal architectural detailing. Gable ends tend to possess flush cornices and soffits possess quite shallow overhangs— there are few, if any moldings applied to these features. Window trims are often non-existent, and the windows themselves are placed quite close to the wall surface in comparison with earlier buildings. Shadows are minimized by the lack of surface detail; asbestos siding becomes a common wall finish for Minimalist Traditional houses since it creates very little shadow line. Porches tend to be small, one-bay wide features supported by thin wooden posts or light wrought iron posts as original treatments.

During the Recovery Era, between 1937 and 1941, and in the years immediately after World War II, it was necessary to construct houses quickly and inexpensively. Thus, the Minimal Traditional style came into being. Minimal Traditional houses are usually one-story and normally has at least one front facing gable. The style takes its name from the fact that it uses traditional stylistic references in a minimal, or stripped-down manner. The style can also incorporate references to earlier styles. These hybrid examples are very common in many early twentieth century neighborhoods.

Commercial Minimalist is the same style in the commercial environment, notable for its lack of cornice treatments and surface detailing. A tile coping may be the only form of cornice treatment. Sign panels, if any, are only minimally recessed, perhaps little more than 1/2 inch. Vents are functional rectangular or square features containing cast diaper-pattern, wire mesh or expanded metal covers. Rake-textured bricks or highly-glazed bricks are common materials. Storefronts often resemble the traditional forms of prior styles, but may have been designed with bulkheads integral to the piers dividing the windows from the doors; transoms are often lacking entirely.