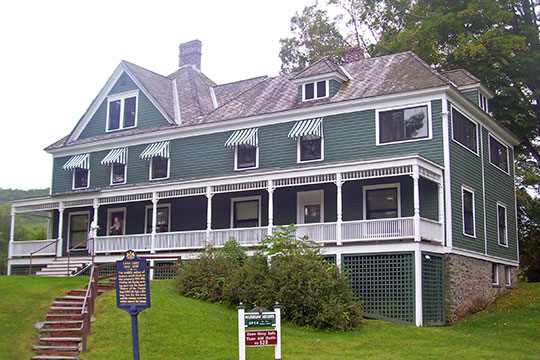 Lackawaxen is an Indian word meaning swift waters or where the way forks. Founded in 1770, it lies on the Delaware at the mouth of Lackawaxen Creek which Zane Grey described as "a little river hidden away ... dashing white sheeted over ferny cliffs, wine-brown where the whirling pools suck the stain from the hemlock roots ... [and] harbor the speckled trout."

Lackawaxen is split by the Erie Railroad; its streets slope irregularly to the river bank in a series of terraces. The majority of its workers are employed as section hands on the railroad.

The Battle of the Minisink occurred near by on July 22, 1779. Chief Joseph Brant, a Mohawk, had led 300 Tories and Indians against Minisink (now Port Jervis) and burned it. Homeward-bound and booty-laden, Brant's men were attacked by 175 settlers under Major Wood. Most of the settlers were killed, and Wood and 25 men escaped only because of Wood's unintentional use of the Masonic distress signal. Seeing it, Brant is said to have allowed him and his men to escape across the creek into the forest.

The almost unbroken forest, which supplies timber for mine underpinning, continues on both sides of the road. Private hunting preserves monopolize thousands of acres of this woodland.