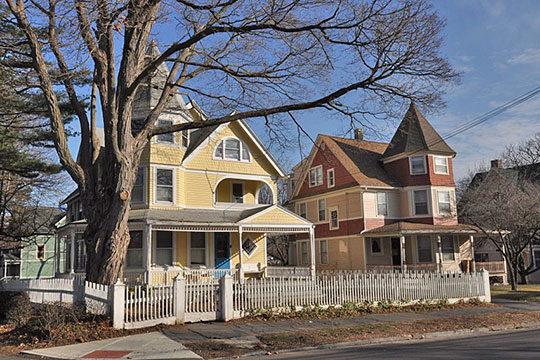 The Black Rock Historic District was listed on the National Register of Historic Places in 1979. Portions of the content on this web page were adapted from a copy of the original nomination document. [‡]

The Black Rock Historic District includes the remains of the village of Black Rock, third most important seaport in Connecticut after the Revolutionary War[1] and important shipbuilding center in the years immediately preceding the Civil War. It includes examples of every major American architectural style from the late Medieval of the seventeenth century to the Italianate of the mid-nineteenth, as well as some resort and suburban styles of the later Victorian era.

Black Rock was originally a part of Fairfield and was not joined to Bridgeport until 1870. It is situated on what was once the deepest harbor in the state west of New London, protected on the south and east by Fayerweather Island and on the west by Penfield Reef (cobblestones collected from this reef were used to pave the streets of New York City in the early nineteenth century, causing its disintegration and resulting vulnerability of the port to the onslaughts of periodic hurricanes).

Black Rock was first occupied in 1644 by the Wheeler family as a trading settlement. Major developments began around 1760, when the first shipyard was opened, three commercial wharves built, and residential building lots laid out. There were at least ten houses constructed by the time of the Revolutionary War.[2] Many other people who earned their livelihoods from port activities lived in Fairfleld Center, which was connected to Black Rock by a causeway across Ash Creek.

Two buildings remain from this period, each of outstanding architectural and historical importance. The John Wheeler House at 266-8 Brewster Street was built by a wealthy merchant who represented Fairfield in the colonial legislature. Although in altered condition, it has what is probably the steepest roof pitch and heaviest exposed frame construction in the Bridgeport-Fairfield area.

The Wolcott Chauncey House at 150 Seabright Avenue is a rare example in Fairfield County of a small 1-1/2-story worker's cottage from the eighteenth century. It was the birthplace in 1772 of Commodore Isaac Chauncey, commander of American naval forces on the Great Lakes in the War of 1812 and first commandant of the Brooklyn Navy Yard.

Black Rock saw a good deal of privateering during the Revolution. It was a key link in the Culper Spy Ring, which relayed information out of New York City to Washington's Headquarters by way of whaleboats across Long Island Sound. These whaleboats were probably beached in Brewster's Cove behind the homestead of Captain Caleb Brewster, who commanded this phase of the operation.

Black Rock was made a Port of Entry for all of Western Connecticut in, 1790. A government lighthouse was built at the mouth of the harbor in 1807, and a turnpike laid out to Danbury in 1812. By 1830, however, Bridgeport appears to have usurped Black Rock's place as the center of eastern Fairfield County commerce, and the village turned to ship and carriage building as a means of livelihood.

Conscientious efforts to construct an urban village center to serve as a focal point for the scattered homesteads in the area date from this time. David Smith, housewright, apparently designed and built the row of three harmonious Greek Revival houses at 237, 259-61, and 283 Brewster Street. Behind them, Calderwood Court was laid out with its workers' houses and carriage manufactory. Across the street was the first Black Rock, schoolhouse, opened in 1841.

A Congregational Church (demolished 1968) was erected at the corner of Ellsworth Street and Bartram Avenue in 1849. Soon afterwards, Captain William Hall came to the village, bought up all four existing shipyards (located outside the district at the foot of Brewster Street), and commenced large-scale shipbuilding operations. At peak production he employed 90 men,[3] and many ship carpenters followed his lead by building their modest Italianate villas on spacious lots on Ellsworth Street. Hall's Shipyard was responsible for the "Charles Cooper," a 1000 ton packet ship designed for passenger traffic between Antwerp and New York. Anchored at Port Stanley in the Falkland Islands since 1866, she is now the sole remainder of the 8000 or so packet ships built in the United States in the 1850s.[4] The "Cooper" has recently been acquired by South Street Seaport Museum in New York City for eventual restoration.

The shipbuilding industry apparently died along with Captain Hall in 1860. The village became an important summer resort when the George Hotel, built as the most elegant along the coast between New York and Newport, was built at nearby Grover's Hill (then known as "Short Branch"). Other industries — notably ship chandlery on the site of the old shipyards and coaling at Captain Howes' dock on Seabright Avenue continued along the harborfront. A turpentine factory was built on part of the shipyard lot in 1868 which, proving unprofitable, was later changed to manufacture sulfuric acid and fertilizer. It was finally moved to Fairfield around 1880.

After Bridgeport annexed the village, the land between the two centers became built up, and Black Rock's fabric was gradually incorporated into that of the larger city. The center, however, remains a relatively well preserved enclave of historic buildings. The village's businesses were removed north to Fairfield Avenue after the trolley line was built there in 1892. There has to date been no need to alter Black Rock's historic character, and David Smith's Greek Revival development, the shipbuilders' villas on Ellsworth Street, and the other important buildings of the seaport community still stand in a complementary environment.

Brilvitch, Charles W.: Walking Through History: A Guide to the Seaports of Black Rock and Southport. Fairfield, 1977.