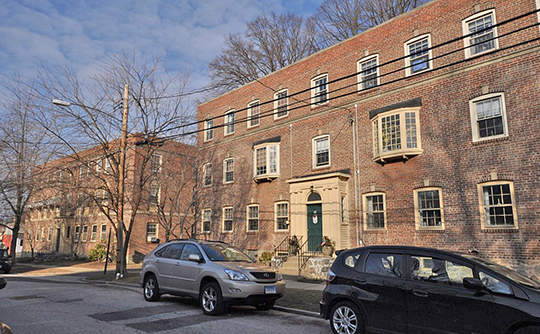 The Black Rock Gardens Historic District was listed on the National Register of Historic Places in 1990. Portions of the content on this web page were adapted from a copy of the original nomination document. [1] Adaptation copyright © 2010-2016, The Gombach Group.

Located on the southwest side of Fairfield Avenue and extending from Rowsley Street west to Brewster Street, then southeast to Nash Lane, and including Haddon Street, the Black Rock Gardens complex forms a tight enclave in a mixed-use residential/commercial area in the southwest section of Bridgeport known as Black Rock.

This apartment complex consists of 12 attached and free-standing red brick blocks facing seven streets and grouped around courtyards reminiscent of college quadrangles. With the exception of irregular buildings at the corners of Fairfield Avenue and Brewster Street, at the corner of L-shaped Rowsley Street, and Haddon and Rowsley Streets, all blocks are rectangular in plan. Each block rises three stories above a high basement and terminates with a plain parapet concealing a flat roof. All elevations are expressed with brick laid in common bond and are enlivened with cast-stone stringcourse, keystones, and sills. Angled oriel windows and blind round arches, used sparingly, add further visual interest to the restrained articulation of these buildings. The Fairfield Avenue and Brewster Street-facades are the most formal, with the middle band of windows articulated as 6/6 double-hung sash with false baluster spandrels and false arch heads. The facades of the buildings facing interior streets are slightly less formal, broken into smaller expanses; the middle band of windows alternates between 6/6 double-hung sash topped by brick arches with cast keystones and angled, multi-pane oriel windows. Entrances feature low stoops and include various classically inspired, Colonial Revival surrounds as well as shallow enclosed porches articulated in the classical orders with full entablatures. At the rear of each block are full-height wooden porches, some of which have been enclosed, serving all apartments.

Alterations to the buildings have been few and consist primarily of aluminum storm sash and awnings shading selected windows. The buildings retain their original windows and all other original decorative elements.

Black Rock Gardens, known as the Black Rock Development when built, is significant due to its direct association with the U.S. Housing Corporation's efforts to provide emergency housing for workers manning the factories of the city's war-related industries. It is a good example of the first government-subsidized housing built in Bridgeport. It survives as a local legacy reflecting the high design quality and first national housing standards achieved through the earliest government-owned housing program in the U.S. It is an excellent example of the work of the collaborative efforts of R. Clipston Sturgis, Skinner and Walker, and planner Arthur Shurtleff, who created a well-conceived and executed model housing unit that maintains a distinct urban character incorporating middle-class housing tastes with English Garden City and American Garden Suburb tenets. As built, the complex presents a strong visual presence and prominence derived from a cohesive site plan, shared materials, and similar scale, proportion, and design quality that set it apart from its immediate context. It is also significant for its association with Bridgeport's most intense period of growth, as housing for workers involved in defense work at the Bullard Machine Tool Company in FairfieId.