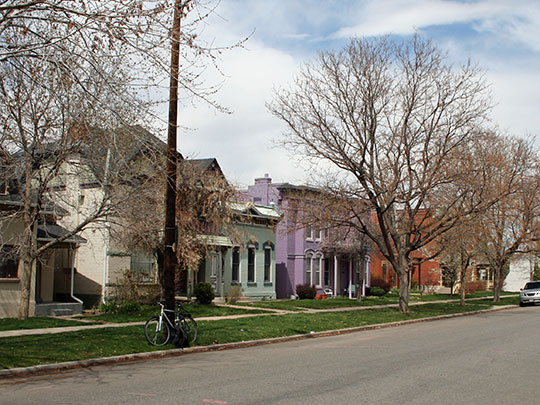 The Glenarm Place Residential Historic District was listed on the National Register of Historic Places in 1983. Portions of the content on this web page were adapted from a copy of the original nomination document. [‡] .

Located between 24th and 25th streets on Glenarm Place, the Glenarm Place Historic District is seven blocks northeast of the center of downtown Denver. The district, which consists of thirteen residences, is part of one of Denver's earliest residential neighborhoods, probably the only surviving neighborhood in Denver that represents so many diverse architectural styles. Moreover, the research, to date, indicates that some of the styles found in the district are remarkably similar to the homes that were in the downtown area before the commercial buildings were erected. The district is distinctive within this older residential area (which lies generally between Broadway and City Park) in the quality and variety of buildings contained—large impressive residence juxtaposed against smaller Victorian cottages and double residences. The number of two-story buildings aid the architectural richness represented sets the block apart from the surrounding neighborhood, which contains almost solely one-story cottages, many of which are in deteriorated condition. The majority of the residences were built between 1880 and 1893, the height of the Victorian era, and the styles of architecture are rich and diverse—Italianate, Second Empire, Queen Anne, Carpenter Gothic, and Victorian Eclectic.

The most important styles to be found within the district are the Italianate. All are rectangular in plan and elevation with flat roofs and high false cornices displaying ornamental brackets and panel molding. 2445 and 2452 Glenarm Place are both two story, three-bay buildings of brick construction. They are distinguished by small covered front porches in the front entrance, areas only. On both buildings the dressed stone-lintels above the windows and doors display a floral pattern. This pattern is repeated in the ornate cornice detailing. The cornice, brackets and decorative panel molding on 2445 is all tin.

2462 Glenarm Place is two-story brick, stuccoed on the front wall only with a massive bay composing the central unit of the front facade. The decorative wooden cornice is supported by brackets and an ornamental frieze. The windows all have dressed stone lintels displaying a rosette both in the center and on the sides. 2435-37 Glenarm Place is a two-story Italianate double residence. The main cornice with its decorative panel molding and brackets is reflected again in the one story front portico framing the entrances to both residences. One of the most distinguishing features of the building is the ornate brick string courses that tie the front of the building together and form relieving arches over each window and door. Decorative brickwork is also found on each of the side chimneys.

2438 Glenarm Place represents the basic Italianate style house that was very common in Denver by the mid to late 1800s. The most notable feature on the building is the decorative brickwork forming the cornice, and the lintels around the windows and front entryway.

The most significant Queen Anne style building on the block is 2425 Glenarm Place feature is the two front gables, with the roof gable repeated in the second story front porch gable. The gables are faced in fish scale shingles, and additional detailing is found on the wooden barge board forming the triangle of the gable. Two other notable features on this building are the decorative brickwork found on the side chimney and the rusticated stone corseting which also frames the arched Romanesque style window on the first floor.

Two of the most notable buildings on the block are 2429 and 2449-55. Both buildings could be classified as Victorian Eclectic.

2429 Glenarm Place is a small one-story brick residence, rectangular in plan, with a flat roof. It is exceedingly unusual for the city of Denver in that it is four bays wide. All of the bays have dressed stone lintels and sills. The other unique feature is its unusually large and ornate tin cornice. This high false cornice was added to the building to make the home appear bigger and more impressive. 2449-55 is a two-story double brick residence exhibiting a combination of styles. As with 2429, the high false cornice on the front of the building was probably added to make the building appear bigger and more impressive. The cornice is of tin construction with false gables detailed with sunbursts. The gables are topped with finials. The triangular shape can be found repeated in the design of the two-story front porticos.

Houses that Contribute to the Integrity of the District

Located within the boundaries of the District are three small Victorian cottages. These cottages were all built between 1880 and 1900, and exhibit a combination of Victorian stylistic elements (such as truncated hip roofs, decorative barge board, small gabled dormers, decorative brickwork and cornices) that maintain the integrity of the District. The addresses of these residences are 2417 Glenarm Place, 2423 Glenarm Place and 2442 Glenarm Place. 2444 Glenarm Place is a single family residence that was probably built some time after World War I. Although not of the period of the other houses, 2444 is of the same size and scale as the smaller Victorian cottages. As such it does not call attention to itself or seriously detract from the overall integrity of the district.

The residence at 2430 Glenarm Place, although constructed around the turn-of-the-century, has been too severely altered from its original appearance to be considered a contributing element. The most drastic change has been the application of stucco to the exterior walls, pediment of the portico, and porch supports.

The Glenarm Place Historic District is a block of thirteen residences located near the historic neighborhoods of Curtis Park, San Rafael Historic District and the Clements Historic District. The block is significant within the general neighborhood because of the quality of the architecture represented and the scale of the buildings, which results in a cohesiveness and visual unity that make it distinctive. The residences in the immediate vicinity surrounding the block consist largely of one story dwellings of more modest scale and detailing than those represented in the Glenarm District. Many of these buildings are in a deteriorated condition and do not retain the physical integrity displayed in the Glenarm Place block.

Located between 24th and 25th streets on Glenarm Place, the architecture of the District's houses displays a rich variety of residential styles and represents both the period in which the homes were built and the type of people who built them.

The roots of the Glenarm Place Historic District go back to the days when Denver's population boomed with the arrival of the Denver Pacific Railroad. Although founded twelve years earlier, in 1858, the city only began to thrive after 1870 when the railroad brought great numbers of new settlers flooding into the frontier town. The population boom inevitably created a real estate boom, and many of the area's residents turned their homes into commercial buildings and moved outward from the confines of the original townsite.

Most of the homes in the Glenarm Place Historic District were built between 1880 and 1893, the height of the Victorian era and a period of expansion and building boom in Denver that produced some of the most significant architecture in the city. The styles of Victorian architecture represented in the District include Italianate, Queen Anne, and Victorian Eclectic. Also notable in the District's architecture is the unusually good representation of decorative tin, which was a phenomenon of the building industry in Denver in the 1870s and 1880s. Among those who built their homes in this neighborhood were some of Denver's most prominent citizens: successful merchants, professional men, and political and civic leaders. However, the neighborhood was never the exclusive preserve of Denver's wealthiest, as was Capitol Hill in its earliest days. For from the beginning, merchants, blacksmiths, tailors, schoolteachers and tradesmen also built their homes here. And it was this economic mix that gave the area its unique architectural diversity — large stately homes juxtaposed against smaller cottages and double houses, all of the buildings exhibiting a rich variety of Victorian styles.

The Glenarm Place Historic District is a notable example of the types of homes built by these solid hard working middle class people who were some of Denver's earliest pioneers. Among those who built their homes on this block were John Young, an ironworker; Catherine A. Carter, a schoolteacher; Henry P. Steele, one of the owners of H.D. and H.P. Steele, Grocers; Sidney Goldsborough, solicitor; and John J. Sleight, carpenter.

In summary, the Glenarm Place Historic District is significant for at least two important reasons; first, it is distinctive in containing within one block, buildings of quality and scale unlike those in the surrounding area; second because it was developed during a time of economic growth by prospering middle class residents and reflects the lifestyle in it's wide variety of richly designed Victorian houses. Within the district five of the most significant buildings architecturally are currently undergoing renovation.