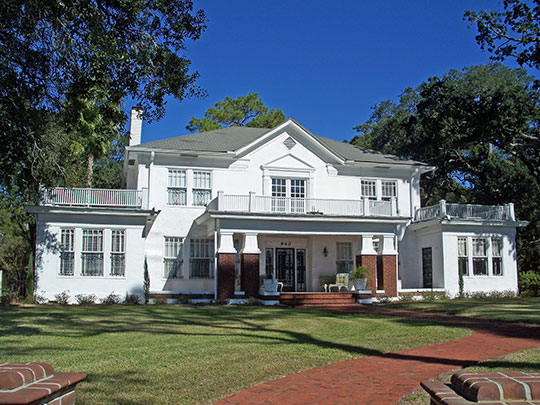 The Ashland Place Historic District was listed on the National Register of Historic Places in 1987. Portions of the content on this web page were adapted from a copy of the original nomination document. [‡] .

Most of the buildings in the Ashland Place Historic District were constructed between 1908 and 1940, with the greatest portion built between 1920 and 1938. After 1929, the depression and lot availability caused a decrease in construction activity in the neighborhood. However, building continued following architectural trends established in the subdivision until all the lots were filled. At the same time, Mobile's World War II population boom created a need for additional new suburbs farther to the west and south.

Ashland Place Historic District boundaries delineate a concentration of structures significant as one of Mobile's first post-Victorian suburbs composed entirely of early 20th-century stylistic trends. Although this neighborhood has made a transition to 20th-century architectural styles, vestiges of 19th-century characteristics typical to the Gulf Coast region remain. These characteristics include continued use of recessed or projecting porches, extensive use of windows and doors for light and ventilation and frequent occurrence of low pitched roofs with wide eaves. Popular styles in the district reflect national taste and include various combinations of Federal, Georgian and Colonial Revivals, Classic Revival, Craftsman, Tudor and English Period Revivals, Mission Revival and suburban Ranch. Many of these homes were designed by George B. Rogers and Clarence L. Hutchisson, Sr., two prominent Mobile architects of the period.

Ashland Place is also significant as Mobile's first early 20th-century suburban development geared toward the upper class. This area is typical of Mobile's housing boom west of downtown between 1900 and 1940 which was first settled as middle- and upper-class suburbia. Fearnway (1908), Flo-Claire (1908), Monterey Place (1910) and Blacklawn (1914) were contemporary subdivisions, but were developed for middle-class residents. Although no houses were built until 1908, plans for Ashland Place were announced in local newspapers in 1905. Ashland Place developers were the first in Mobile to use large lots, numerous live oaks, an irregular grid plan and entrance gates, all characteristic of the then popular "City Beautiful" concept.

Ashland Place Historic District (1908-1940) was settled as an early streetcar suburb along the Springhill Avenue trolley line. This district was originally centered and platted around the 1844 raised cottage and 40-acre homestead of Lorenzo M. Wilson (father of Augusta Evans Wilson). Streets in the neighborhood are 60 feet wide, asphalt paved, platted in an irregular grid pattern, concrete curbed and flanked by concrete sidewalks. Also, the blocks have retained their original 15-foot alleyways. The streets are lined with large rectangular lots with a frontage of 75 feet and running between 150 and 200 feet deep. Occasionally, lots have been doubled or resubdivided. Houses along Levert, DeLeon and Ashland Place Avenues are set back 40 to 50 feet while those along Ryan and Lanier Avenues are set back 30 to 40 feet. As the subdivision is slightly rolling, most lots are terraced with low (six inch) masonry retaining walls. All lots are well planted and shaded with numerous live oaks planted on the lots as well as planted along the streets. The subdivision also features a main entrance gate at the head of Lanier Avenue and three smaller entrances off Old Shell Road.

Housing forms and styles throughout the district reflect the range of styles and forms popular between 1900 and 1940. Housing forms found in the neighborhood include T-plans, U-plans, irregularly massed plans, bungalows and Four Squares. These forms appear in a variety of styles and combinations of styles popular during the early 20th century such as Georgian and Federal Revivals, Colonial and Classic Revivals, Craftsman, Mission Revival, Tudor Revival, English Period Revival and suburban Ranch. Most of the houses are architect-designed homes built for upper-class owners.