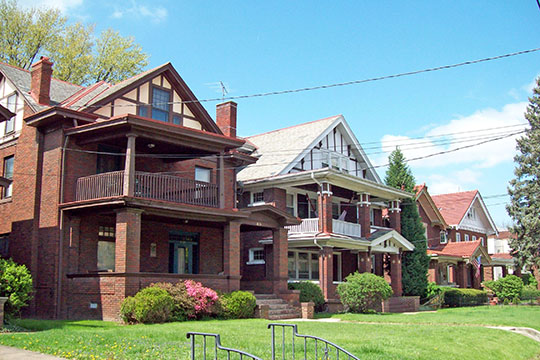 The East End Historic District was listed on the National Register of Historic Places in 1978. Portions of the content on this web page were adapted from a copy of the original nomination document. [‡] .

Long regarded as the major early twentieth century subdivision of Charleston, West Virginia's capital city, the "East End" embraces an area rich in historical sites and events antedating the "turn of the century." While the primary urban residential development of eastern Charleston occurred in the period 1895-1925, the late eighteenth century settlement of the city and the formation of the first Kanawha County government are events associated with the East End Historic District. After 1795 the settlement on the banks of the Great Kanawha River expanded to the mouth of the Elk River where the retail and industrial growth of Charleston were to be centered for the better part of the nineteenth century. The broad bottomlands east of here were privately developed under the Ruffner family and remained plantation grounds and cornfields for over 100 years.

In April 1788, Colonel George Clendenin and his party built a fortification along the Kanawha River by order of the Virginia Assembly and Governor Randolph as part of the defense of that colony's frontier. In 1792 the fort was named for Governor Henry ("Light Horse Harry") Lee, father of General Robert E. Lee, and it continued to serve until 1795 when Indian wars abated. The location of Fort Lee has been placed in the vicinity of Kanawha Boulevard between Brooks and Morris Streets.

Official recognition of the settlement at the mouth of the Elk River occurred in 1794 when the Virginia Assembly designated the location as "Charlestown" in honor of Charles Clendenin, father of the founder. Of much greater significance, however, was the purchase of a 502 acre tract by Joseph Ruffner, a German-American from Page County, Virginia. The land was located at Campbell's Creek, six miles east of Fort Lee, and included the famous salt licks that were to be developed as a thriving industry in the early nineteenth century. When Ruffner appeared in the spring of 1795 to inspect his new lands, he stayed for a time at Fort Lee where he purchased from George Clendenin the thousand acre tract now encompassing Charleston's downtown and East End residential neighborhood. It was in the latter area that he built a house near today's "Holly Grove," and succeeding generations of Ruffners built their homes on this estate overlooking the Great Kanawha River. Joseph, first of the Kanawha Ruffners, is buried in a tree-shaded cemetery in the 1500 block of Kanawha Boulevard, now called Ruffner Park.

During much of the first half of the nineteenth century, Charleston expanded along the river road (today's Kanawha Boulevard), a segment of the trans-Allegheny route known as the James River and Kanawha Turnpike. The necessity for a direct link between eastern Virginia and the Ohio Valley was recognized by the legislature as early as 1785. With the completion of the turnpike during the decade of the 1820s the salt makers, farmers, herdsmen and early manufacturers had ready access to the markets of east and west, and Charleston, being a river crossing on the road, became a terminal point and stage depot.

After the conclusion of the Civil War and with West Virginia's creation as the thirty-fifth state, the town rapidly grew. The decade of the 1870s marked an especially important period of growth when Charleston became a city by act of the legislature on February 17, 1871. Completion of the Chesapeake and Ohio Railroad to the town was celebrated in 1873, in 1875 Congress began making appropriations for lock and dam improvements on the Kanawha River, and the legislature designated Charleston as the state capital in 1869. When the seat of government was moved back to Wheeling in 1875, the question of a permanent location was again raised, so the legislature submitted the issue to the people in 1877, and the vote in favor of Charleston resulted in the permanent transfer of state government to this city in 1885.

The period in Charleston's development from 1885 to the end of World War I was marked by great expansion. Location of the city in the heart of vast fields of coal, gas, oil , and timber resources influenced its evolution from a rural village to an industrial and retail center. The increase in population necessitated expanded city boundaries, and more pretentious neighborhoods were a natural outgrowth of wealth and political power. Major development prior to 1876 was confined to the area west of Bradford Street, but municipal consolidation of the lands east of Bradford was completed during the years 1892-1914. Gradual dispersion of Ruffner lands accelerated with the First Ruffner Addition of 1895 and the Ruffner Brothers Additions of 1902 permitting the extension of major through streets to a point near Elizabeth, and by 1907 the present grid pattern of East End streets was generally established. The creation of the de Gruyter Addition between Michigan and Chesapeake Avenues was undertaken as early as 1904, and the Comstock and Kanawha Additions east of California Avenue were laid out by 1914.

Urban development potential soon outstripped agricultural values of the lands, and as the population of Charleston increased from 7,447 to 39,608 between 1890 and 1920, East Charleston became the city's most fashionable residential neighborhood. One U.S. Senator, five governors, five secretaries of state, two congressmen, numerous city mayors, literary figures, judges, artists, merchants, clergymen, industrialists, physicians, and other professionals made their homes on former Ruffner lands. It was not until January 3, 1921, however, that the most significant factor influencing the development of the East End Historic District occurred, for on that date the statehouse on Capitol Street burned. Legislative provision for a building commission enabled Governor Ephraim Morgan to appoint a distinguished panel that secured a scenic East End site for the new capitol in the autumn of 1923. Construction began on January 7, 1924, and ended with the dedication ceremonies of June 20, 1932. The West Virginia Capitol Complex (which includes the Governor's Mansion), is sandwiched between the two residential sections that form the East End Historic District. With the seat of state government located here, the neighborhood continued its character of affluence and beauty in buildings still evident today.

This area of Charleston has evolved, then, from open farmland with widely scattered houses in the early eighteenth century, through a prolonged period of subdivision that witnessed the start of a more residential character on the western end by the 1880s, into a concentrated segment of development before World War I, and finally to an established quality of a fine neighborhood of substantial houses by the time the West Virginia Capitol was dedicated in 1932.

Although showing a concentration of styles, techniques, materials and design of the latter nineteenth and early twentieth centuries, the East End Historic District also displays elements of its early beginnings and interim periods. Greek Revival lines are evident in the MacFarland-Ruby House at 1310 Kanawha Boulevard, East (c.1835), and transitional features are seen in the Augustus Ruffner House at 1506 Kanawha Boulevard, East (c.1834).

An increase in the number of residences began in the late 1580s and continued relatively unabated through the 1920s and early 1930s. Because of the period and concern for style and fashion by the fairly affluent builders, many of the houses displayed excellent detail in late Victorian-era modes. Queen Anne is most prevalent, being seen in such houses as those at 1210, 1422 and 1636 Kanawha Boulevard, East. All three were constructed about 1890, and each has steep, multiple gables with ridge lines at right angles, high, paneled or corbeled brick chimneys, and a variety of sized and shaped windows. In addition, the house at 1418 Virginia Street, East has some Eastlake features, and the eclectic is evident at 1223, 1306 and 1400 Virginia Street, East.

Only a few places show transitional lines moving toward the Colonial Revival styles, but the latter are profusely illustrated in buildings such as those at 1500, 1520, 2006, and 2300 Kanawha Boulevard, East and 1425 Quarrier Street. Built between 1912 and 1935, each of these has features peculiar to the individual unit, but the columned porches a tall but 2300 Kanawha Boulevard are a common element. The latter is of a Spanish or Mission design and includes a tiled hip roof, arched casement windows in groups of three and a recessed entrance.

Although many of the houses are unique in one respect or another, it is the quality of building and the quantity of structures spread over a rather large area that gives the East End Historic District its character. Having come into existence as a community in itself fairly slowly, the concentration of construction from roughly 1895 to 1925 accentuates the feel gained through common elements of size, materials, spacing, design and setting. Local architects such as H. Rus Warne and the Davidson Brothers were active in the area and helped to assure its character in the pre-World War I period. Walter F. Martens, designer of the Governor's Mansion, was especially influential in the 1920s with his Georgian Revival interpretations as may be seen at 1500 Kanawha Boulevard and 1509, 1528, 1556 and 1559 Virginia Street. In addition, Mr. Martens executed the attractive Woman's Club building at 1600 Virginia Street in the Chateauesque style.

Influences of the day can be viewed in the evolution of the East End Historic District from west to east. For instance, Virginia Street between Morris and Bradford includes houses constructed during the period 1890-1910. Most are eclectic, with the earlier units displaying features of Queen Anne intermixed with some Shingle, Stick and Romanesque elements. Progressing to the block between Ruffner Avenue and Elizabeth Street, the houses are mainly from the period 1910-1925. There are a few early examples with Victorian-era features, but here the Georgian Revival dominates where a style stands out, and examples of the Prairie style and Jacobethan Revival are frequent. At the eastern extreme of Kanawha Boulevard, between California and East Avenues, Bungaloid, Mission or Spanish Colonial appear along with the Georgian Revival.

Within its greatest period of growth, then, the East End of Charleston reflected housing in the styles generally prevalent in the United States at the time. Since it developed from west to east, it is only natural that elements of Queen Anne, Shingle, Stick, Eastlake and some features of Italianate, Romanesque and Chateauesque appear in the western part more frequently, while Georgian Revival, Prairie and Jacobethan extend from the center to the east.