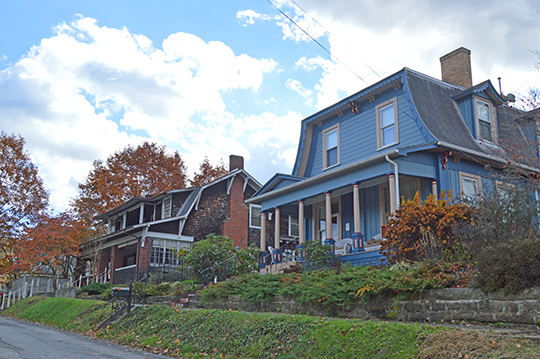 The West Union Residential Historic District was listed on the National Register of Historic Places in 2010. Portions of the content of this web page were adapted from a copy of the original nomination document. [‡]

The West Union Residential Historic District is densely populated with a variety of styles popular from the mid 19th century into the early decades of the 20th century. While the building styles are varied, and every building unique, there is a sense of cohesiveness to the district. The majority of the homes were historically single dwelling residences, and most remain single dwelling residences today.

The majority of the homes in the district were built at the turn of the century, prior to 1916, according to Sanborn Maps of 1916. Many of the homes exhibit the Queen Anne, Colonial Revival, and Bungalow style, with the majority being Queen Anne. The two churches both represent the Gothic Revival style. A majority, however, are vernacular or exhibit only elements of the different styles popular during the period of significance. Vernacular types found in the district include the square, one-story cube house with pyramidal roof. One example does not have dormers, while another has three hipped roof dormers and a front gable dormer. Other important vernacular house types located within the district includes the two and one half story, front gable house and the one to one and one half story variation of the gabled ell.

The oldest home in the district is the Floyd Neely home, built circa 1858. This two-story, Second Empire-style house has board and batten siding. The roof is a variation of a mansard roof and faced with fishscale siding in the gable end. There are decorative brackets and vergeboard around the roof eaves. The porch is one story with a row of six round column supports, a shed roof and pediment over the entrance area. The windows are early double hung, one over one windows. On the side of the home there are four front gable dormers, with a window in each. While there have been small additions to this home, it still possesses historic integrity architecturally.

The Queen Anne homes of the district, exhibit the style in both shape and details. The homes have steeply pitched roofs with multiple gables, generally with a dominating front-gable producing a broken facade. There are patterned fishscale shingles, cutaway bay windows and angled corners, all to avoid an even fafade. The district has examples of both wood siding and brick-faced homes as well as one home faced with stone. The houses feature front porches spanning the front elevation of the home or wrapping around. Many of the porches feature spindlework details and turned-post wood columns. Most chimneys have patterned masonry. 301 Church Street and 415 Church Street both feature Eastlake detailing. 413 Church Street is decorated with Stick Style detailing. 307 Church Street and 405 Church Street both feature octagonal turrets. 401 Church Street is notable for its decorative lattice muntin transoms above each first floor window. 303 Court Street has interesting fenestration details including a central arched window on the second floor, flanked by three over one windows and a Palladian window on the front wall dormer. There is much variety among the homes, even within the Queen Anne style.

The Gothic Revival style is represented in the two churches that are located within the district, the Emmanuel United Methodist Church (311 Church Street) and the West Union Baptist Church (Corner of Cottage and Court Streets). The Methodist Church was built in 1910, this brick church features a three story bell tower with castellations at each corner, Gothic arched windows with rough stone beltcourse sills and brick surrounds. There are three symmetrical Gothic arched stained glass windows on the projecting bay of the church, the center window is the largest. There is also a rose window in the center of the gable. The West Union Baptist Church was built in 1904 and has similar Gothic details. The three story tower has a very steep pyramidal roof with projecting perpendicular eaves and decorative diamond patterned brick work. The windows have Gothic arches with rough stone sills and marble mold lintels. The center bay has the most elaborate window details; it is a large pointed arch window with a centered quatrefoil, tracery design and stained glass.

There is one excellent example of a Shingle Style home, built circa 1908, 406 Church Street. This home is faced with wood shingles and has a wood shingle roof as well. Fitting to the style it has an intersecting gambrel roof. There are decorative brackets on the second story overhang. There is a twenty-eight paned transom on the first floor. This house has great architectural integrity. The Colonial Revival homes have relatively symmetrical facades with central entry porches. Most have columns supporting the entry porch. The windows are typically paired, one over one or multi-paned over one. 306 Church Street is the premier example of the Dutch Colonial Revival style in the district. The home was built circa 1910-1916, and features a gambrel roof with a front projecting gabled pediment bay on the second floor. The porch runs the full width of the house and has round support columns. The gable ends feature wood detailing.

306 Columbia Street is an example of a Bungalow. The district includes several examples of Bungalows which were popular during the 1920s and 1930s. These are typically one or one-and-a-half stories and feature low pitched roofs with wide overhanging eaves and porches with large, square, often stone columns. Typically the windows are multi-paned over one large pane.

The Doddridge County High School (201 Stuart Street) was built circa 1940, and is modern in style. The large brick building has minimal vertical brick detailing, creating a sense of vertical columns. The central bay is projected and has a large stone engraved sign, bearing the name of the school. The windows on the front facade have been replaced; however, the original windows located on the rear of the building are of great interest. They are very large with twelve panes and prairie style metal sashes. This building represents the consolidation of Carr High School and West Union High School in 1933; it was occupied as a school until 2008.

The West Union Residential Historic District is an early residential area serving the housing needs of an industrious and civic community. Its architectural integrity still remains. The architectural styles within the district are varied. However; collectively they represent the development and popularity of architectural styles from the late 19th to the early decades of the 20th century. With the construction of U.S. Route 50, which replaced the Northwestern Turnpike and bypassed West Union, the town's industrial nature has declined, and has been relatively free of new development. This has preserved the town just as it was during the period of significance, and has also encouraged local citizens to value and preserve their history.