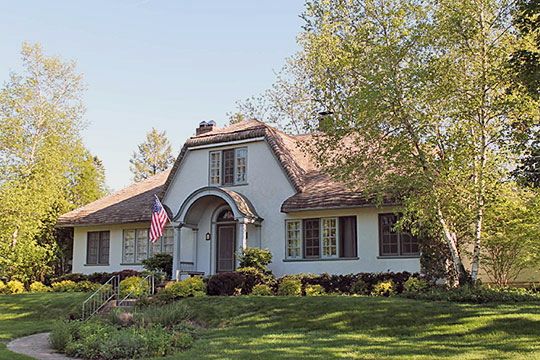 The Richards Hill Residential Historic District was listed on the National Register of Historic Places in 2013. Portions of the content on this page were adapted from a copy of the original nomination document. [‡]

Situated in the southeast corner of the city in a small residential area, the Richards Hill Residential Historic District is a well-defined cluster of 62 buildings. The development of the area of small to large homes began in the 1850s and continued over the next century. Representative of the prevailing architectural styles of the time; Federal, Gothic Revival, Queen Anne, Bungalow, Tudor Revival, Dutch Colonial Revival, French Renaissance, and Mediterranean Revival style residences are prominent within the district. The result is now one of Watertown's most architecturally intact historic residential areas.

This historic residential neighborhood is located southeast of Watertown's core and has a boundary roughly delineated along Richards Avenue, Harvey Avenue, and Livsey Place from Western Avenue on the north to Thomas Avenue on the south and along Charles Street from Thomas Avenue on the north to Sunset Avenue on the south. The topography within the district slopes down from the J. Heber Smith House at 1325 Western Avenue, which is located on the highest geographic point in the City of Watertown, steeply to South Concord Avenue and the Rock River towards the east and to Washington Park towards the southwest. Because of the topography and proximity to the Rock River, the city's regular street grid is highly irregular in this neighborhood. It has wide streets with parallel parking on both sides and concrete curbs and gutters. The sidewalks are set apart from the streets' curbs by a grass terrace with large mature trees lining the streets. The residences in the district generally respect a uniform setback from the street. The neighborhood consists of small lots typical of urban practice, which conform to the standard conventions of the plats' block and lot configurations. They are generally narrow, deep, and rectilinear in shape. Exceptions to this lot pattern are the two oldest houses in the district which are situated on large lots with generous setbacks, as their construction likely predates the street grid, as well as larger houses on spacious lots nearest the Rock River. There are alleys in the district, and, as such, most garages are detached and at the rear of the lot.

Residential development in Watertown began immediately adjacent to the commercial district along the Rock River and radiated outwards relatively evenly. As multiple ethnic groups settled in Watertown, they tended to congregate in separate sections of the city. However, unlike other communities in the state, this regard and clustering by ethnicity, social and economic status, and industry eventually weakened, and the development of a single prestigious residential neighborhood in Watertown did not occur. Rather, prominent citizens in commerce, professions, and industry constructed homes, still generally in small clusters, throughout the city. The city's residential neighborhoods, especially those on the south and west banks of the Rock River, exhibit a wide variation of size and style, a result of the mixing of working and upper class residency. A majority of the homes in the Richards Hill neighborhood are of small to moderate size and reflect the architectural styles popular from the late-nineteenth and early-twentieth centuries, the height of development in Watertown.

During the mid- and late-twentieth century, several large houses were constructed on the southeast outskirts of the city, in what would become the Richards Hill neighborhood. For several decades, this portion of Watertown remained the rural fringe of the city comprised of large estates, the largest of which was owned by John Richards surrounding his famed octagonal house.

On Western Avenue, immediately north of the neighborhood, the German Lutheran Wisconsin Synod established and began constructing a campus for Northwestern College, a preparatory school and seminary, in 1864. Most likely in response to the school's development, John Richards sold a strip of his property on Western Avenue across from its campus as small residential lots in 1870. The urbanization of the district began that year with the construction of the Frederick Wilhelm Winkenwerder House on one of these lots.

By 1910, the Richards family platted and sold the remainder of its outlying property as small residential lots. With an attractive location near the college and scenic Rock River, lots were quickly sold and development was at its highest rate during the 1910s. During that decade, homes were primarily constructed along the north half of Richards and Harvey avenues, closer to Northwestern College. Several houses in the neighborhood were constructed at this time to house the college's faculty. Homes from this period were primarily in Queen Anne, Dutch Colonial Revival, Bungalow, and vernacular variants of these styles.

The neighborhood was heavily infilled during the 1920s, especially the western portion along Richards and Harvey avenues, primarily with Bungalow and Period Revival style residences. During this period of time, land on the eastern portion of the neighborhood with steeper terrain closer to the Rock River began attracting the development of larger homes on more spacious lots than the traditional urban and compact style of development to that point.

While growth of the city was nearly nonexistent during the decade of the Depression, the district's development was already well established and merely slowed during this time. During the 1930s, the neighborhood grew southward with the focus of development along Thomas Avenue and Charles Street. The shift to larger lots and homes became the standard for the neighborhood, as the wealthiest residents were the only ones with the means to build new homes during and immediately following the Depression. This is represented by the district's homes from the 1930s being almost exclusively modestly-sized to large Tudor Revivals. By that end of the decade, the neighborhood was almost completely developed.

In 1938, the octagonal Richards House was donated to the Watertown Historical Society, then only five years old, with the condition that the house be opened to the public. Soon thereafter, the house opened as a local history museum.

Infill houses built through the end of the district's period of significance in 1950 tended to be smaller, less-detailed Period Revivals and contemporary style buildings. Since that time, only four additional buildings have been constructed in the neighborhood.

The Richards Hill Residential Historic District is a fine local example demonstrating the range of residential architectural styles during its peak period of development between ca. 1854 and 1950. The district conveys a sense of historical and architectural cohesiveness through its high style architectural designs of 62 small to large sized homes, which distinguish it from other residential areas within the city. Representative of the prevailing architectural styles of the times, Period Revival styles, such as Tudor Revival, Dutch Colonial Revival, French Renaissance, and Mediterranean Revival and Bungalow, Queen Anne, Federal, and Gothic Revival styles are prominent within the district. The residences within the Richards Hill Residential Historic District are well preserved and have much the same appearance today as they would have years ago. The result is now one of Watertown's most architecturally intact historic residential areas.