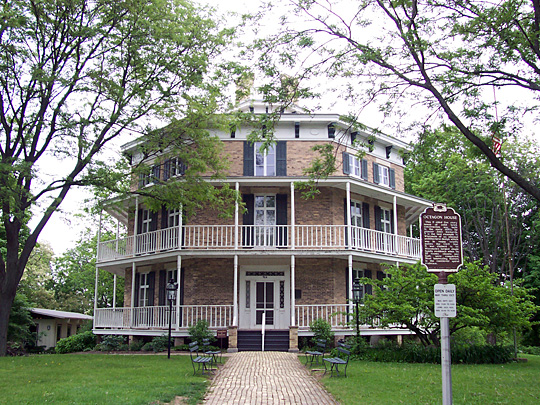 Watertown's first known non-indigenous inhabitant, Timothy Johnson, settled the area in December 1836. He laid claim to 1,000 acres on the west banks of the Rock River and erected a log cabin for his family. Johnson chose this location for his homestead because he saw the potential power the Rock River's rapids would produce. In 1853, Watertown became a city and adopted a charter. During that decade the population flourished, particularly with an influx of immigrants of German descent, and grew to 8,512 in 1855, at which time it was the second largest city in the State. The early construction of two hydroelectric dams rooted Watertown's economy in industry, upon which it continues to be reliant today.

In 1854, the Octagon House [see Octagon style], one of Wisconsin's most unique and popular historic landmarks, was constructed. This 57-room, eight-sided home was built by John Richards and wife Eliza. The house featured a long spiral staircase and a cistern system that provided running water to the household—a plumbing feat unheard of until that time.

In 1856, Margarethe Schurz, one of Watertown's early settlers and wife of Carl Schurz, founded the first kindergarten in the United States. The kindergarten was originally located in the Schurz's home at 749 N. Church Street. The class was eventually moved to a small frame building located on the corner of N. Second and Jones Streets. In 1956, 100 years after its founding, the building was saved from razing by the Watertown Historical Society and moved to the grounds of the Octagon House. The school house has been open to the public since 1957.

Watertown is also famed for the local practice of goose noodling; a traditional German practice which involved feeding noodles to geese several times a day. This practice produces geese with enlarged livers which ultimately are used to make pate de fois gras. Historically, this Watertown delicacy was found on the menus of Ocean Liners, cross country trains, and in restaurants as far away as New York City. This part of Watertown's heritage is memorialized by the high school athletic team name, the Goslings.