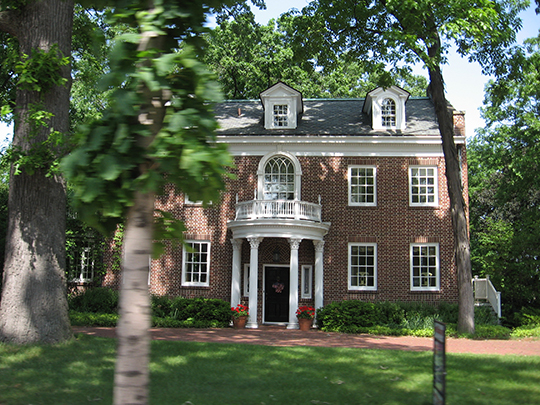 The North Broadway Street Historic District was listed on the National Register of Historic Places in 1983. Portions of the content of this web page were adapted from a copy of the original nomination document. [‡]

De Pere's North Broadway Street Historic District is the city's most cohesive historic neighborhood, composed of a spectrum of domestic styles of the 19th and 20th centuries. The fifty-four nominated buildings (only seven of which are non-contributing) include fifty-one houses, a small early twentieth century church, a museum, and a small apartment building. The district follows a five-block stretch of North Broadway Street from Cass Street to several lots north of Randall Avenue, anchored by two and one-half blocks (on Fulton, Franklin, and Cass) of houses at the south end. Contrasted with the commercial industrial sector of De Pere to the south and west, the district is distinguished by use; generous front and rear yards, careful maintenance, quality of buildings and state of preservation, as well as historic associations, distinguish the N. Broadway Street area from the general residential fabric.

Pivotal buildings are generally those which have been least altered and, in keeping with the local significance of their original or subsequent owners, include most of the more substantial turn-of-the-century "show places" of the city. Contributing buildings are vernacular or altered versions of nineteenth-century Greek Revival, Italianate, or Queen Anne styles; or early 20th-century "builders' foursquare" (see: American Foursquare), Colonial Revival, bungalow, or Period revival designs. Scale and density varies, from the smaller houses of the early nineteenth century, to the more substantial proportions of the late picturesque and builders' houses bridging the turn-of-the-century, to the modest domestic styles of the tens, teens, and twenties. Most of the buildings are frame, but there are several of brick and stone as well.

The North Broadway Street Historic District is a distinct residential neighborhood of De Pere, whose houses represent a spectrum of historic periods of construction from 1836- 1923. The five-block area north of the east De Pere business district and paralleling the Fox River has historically been the community's premier residential neighborhood, whose original and subsequent owners have made significant contributions to the settlement and growth of this oldest community in northwest Wisconsin. Despite variations in scale, materials, and proximity of buildings, the district is unified by its wide lawns and yards, and by careful maintenance of property. Of the fourteen pivotal buildings, all but one are architecturally significant; four of those thirteen, and the Chase Residence, are significant for their associations with locally-important individuals. The boundaries also include four moved structures (three of which were relocated there early in the district's period of significance), and a small church; all contribute positively to the character of the area.

At the time that contact with the Green Bay-De Pere region was recorded with the visit of Jean Nicolet from Quebec in 1634, the bountiful region at the mouth of the Fox River was occupied by Pottawatomie and Winnebago tribes. All but expelled by 1812 when American proprietorship of the region succeeded that of the French and the British, the undisturbed Indians were earlier engaged largely in fishing and rice and corn cultivation. From the time of European contact in the seventeenth century until the folding of the American Fur Company in 1844, harvest of the region's fur and lumber supplies sustained the French (1669-1759) and British (1759-1812) posts, and the subsequent northwestern United States territory. Agriculture and dairying were later to utilize the region's rich soils. Yet it was the hydroelectric power of the Rapides des Pere which was to fuel the economy from the mid-nineteenth century on, sawing and turning the pine, birch, maple, and hemlock forests into lumber and woodenware; forging steel; and later processing pulp into the region's important paper products.

Some thirty-five years after Nicolet's exploration, Jesuit Father Claude Allouez traveled to the region from Chequamegon Bay to establish a mission to the Indians. In 1671-72, the mission house of St. Francois Xavier was established on a projection of land at the last rapids before the Fox River's final course to Green Bay and Lake Michigan. The Rapides des Peres was a favorite stopping place for the coureurs de bois, and became the center of the lively fur trade. During the time of British possession, the region was also included in the American Northwest Territory (1787); by 1805 when it became part of the Michigan Territory, the area had passed from Ohio to Indiana to Illinois territories. Starting with a land mass of half the size of the future state of Wisconsin, the Michigan territory county of Brown (with its heart in the Green Bay-De Pere area), proclaimed by Governor Lewis Cass in 1818, was gradually pared down to its present size by 1851; the various subdivisions had yielded the Wisconsin counties of Milwaukee, Sheboygan, Fond du Lac, Marinette, Marquette, Washington, Dodge, Portage, Winnebago, Calumet,, Oconto, Door, Kewaunee, and Outagamie.