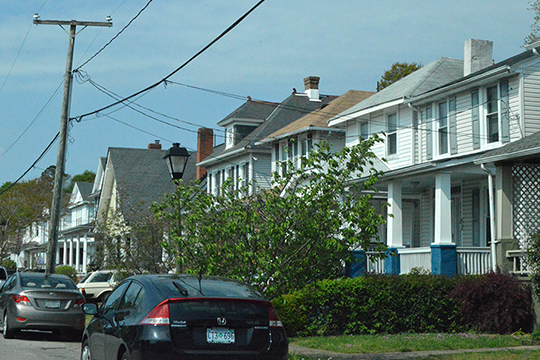 The Riverview Historic District [‡] was listed on the National Register of Historic Places in 1999.

Developed primarily during the first quarter of the twentieth century, Riverview emerged as a suburban community north of the growing downtown area of Norfolk, Virginia. The neighborhood was composed of several individually platted tracts. Real estate developers recognized the financial prospects of Riverview, inspired by its location on the Lafayette River and direct accessibility to the streetcar. Each of the tracts was subdivided for the future development of grand single-family dwellings surrounded by spacious landscaped parcels, fronting a diagonal system of tree-lined streets. The earliest dwellings constructed in Riverview exhibited the fashionable revival and American movement architectural styles and forms. Yet, development was slow, hindered by growing real estate demands and the lack of amenities servicing the area. Thus, Riverview was further subdivided to encourage the construction of modest dwellings on smaller lots during the 1910s and 1920s. The combination of less ornate dwellings and the occasional apartment building fostered unification of the sparely developed individual subdivisions; thus, creating a single neighborhood known as Riverview. The ninety-seven acres of the Riverview neighborhood contain 251 properties, all of which are domestic resources. Of the properties within the historic district, 197 contribute to the significance, while only 54 are non-contributing.

The secluded neighborhood of Riverview is bounded by the Lafayette River to the north and east, Lafayette Park to the south, and the transportation/commercial corridor of Granby Street to the west. A result of the individual plats established at the turn of the twentieth century, Riverview is bisected by as a series of diagonal streets stemming from the north-south axis of Columbus Avenue. The six streets branch off Columbus Avenue to the northwest, terminating at Holly Avenue. Holly Avenue, one of the last streets improved by dwellings, was laid out to follow the curved topography created by the Lafayette River. To the west of Columbus Avenue, the four bisecting streets intersect with Granby Street, a major north-south transportation route connecting Riverview to downtown Norfolk.

Riverview is a compact suburban neighborhood located north of downtown Norfolk, Virginia. Occupying approximately ninety-seven acres, the neighborhood is bounded on the north and east by the Lafayette River, on the south by Lafayette Park and on the west by Granby Street. In 1875, the area now known as Riverview was divided into five tracts that made up the neighborhood subdivisions of Riverview Park and Riverside Park, a portion of the Cruser Place subdivision, and the property deeded to heirs of Cornelius C. Cruser. Between 1890 and 1900, each neighborhood was subdivided with housing lots and platted by individual real estate companies. The 1898 extension of the streetcar, which eventually encircled the subdivision, proved to be one of the greatest amenities afforded residents of Riverview. Initially catering to the upper-middle-class and leading members of Norfolk's business community, the neighborhood was improved with a significant concentration of large residential buildings displaying the high-style architecture fashionable at the turn of the century. Yet, development was slow at the onset, prompting developers to build more modest dwellings on smaller lots to attract middle-class citizens. By the second quarter of the twentieth century, the subdivisions had grown into a single, interconnected suburban neighborhood, united historically and aesthetically by stylistic interpretation, plan, and physical development. Over the years, the subdivisions lost their separate identities, becoming singularly linked as the residential neighborhood of Riverview.

In 1839, the area that would become Riverview consisted of a ninety-seven-acre tract of land belonging to Michael Hendron. In 1875, Hendron's heirs divided the property into five tracts. Tract 1, located between Columbus Avenue and Granby Street, became part of the development of Cruser Place. Tracts 2, 3, and 4 became Riverview Park, and to the south, Tract 5 was developed as Riverside Park. Architectural and landscape features that made the five tracts desirable for investment included their waterfront location, the establishment of the City Park (now Lafayette Park) to the south in 1892, and the installation of gas and electric lines. The Granby Street streetcar line made the Riverview tract easily accessible to downtown, and essentially opened the area for suburban development.

The southern half of Tract 1 began to be subdivided and improved by heirs of C.C. Cruser in the 1890s. This was carried out by several individuals acting independently, and constitutes the earliest development in Riverview. Tracts 2, 3, 4, and 5 were bought and sold as investment property, and remained undeveloped for over twenty years. While Riverside Park was the first of the three planned subdivisions to be platted, it was the last to receive substantial development. The plat for Riverside Park was officially filed in 1899, followed one year later, in 1900, by the platting of Riverview Park. Riverview Park was originally envisioned as a suburban neighborhood catering to upper class residents. However, construction of such grand housing was minimal. To increase lot sales, the housing requirements were lowered; thus opening the community for the construction of more modest buildings set on a narrower single lot. With the laying of roads and the installation of service amenities by the turn of the twentieth century, Cruser Place was platted in 1906. Cruser Place was composed of the northern half of Tract 1 and a large portion of land west of Granby Avenue, outside of the proposed Riverview Historic District.

Riverview is an architecturally cohesive community that features primarily freestanding single-family dwellings designed in a variety of late nineteenth and early-twentieth-century styles. Some of the earlier houses, the majority built shortly after 1900, were highly ornamented, and sited on spacious lots. These buildings were constructed primarily along Holly Avenue, and exhibited high-style Queen Anne and Colonial Revival features, including wrap-around porches, complex roof configurations, bracketing, denticulated cornices, and an array of ornamental cladding materials.

As the real estate market demanded, several of the original landowners purchased additional lots, improving them with smaller houses designed to appeal to middle-class residents. Consequently, larger numbers of smaller, less ornamented houses were built in the neighborhood during the second decade of the twentieth century. The most predominant house forms were bungalows and American Foursquares with Colonial Revival and Craftsman detailing. More modest interpretations of the Queen Anne style were also built, as well as Tudor Revivals and Spanish Colonials.