Photo: Houses on the northern side of Delaware Avenue east of the Gosnold Avenue intersection, Colonial Place Historic District, Norfolk, VA. The Historic Distric was listed on the National Register of Historic Places in 1979. Photographed by User:Nyttend (own work), 2017, [cc0-by-1.0 (creativecommons.org/publicdomain/zero/1.0/deed.en], via Wikimedia Commons, accessed June, 2018. 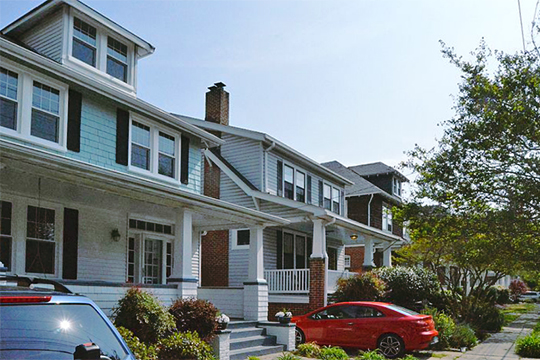 The Colonial Place Historic District was [1] listed on the National Register of Historic Places in 2002.

Developed during the first quarter of the 20th century, Colonial Place emerged as a suburban community supporting the growing downtown area of Norfolk. Real estate developers recognized the financial prospects of Colonial Place, inspired by its location on the Lafayette River and its direct accessibility to the streetcar line (see streetcar suburbs). The neighborhood, originally catering to upper class patrons, developed with grand single-family dwellings that exhibited revival and American movement-era styles and forms. The flat tract was landscaped with tree-lined streets, traffic circles, and an intricate system of curvilinear roads that complimented the less than one-acre housing lots. The domestic buildings were buffered from the public streets by sidewalks and a grassy median planted with shade trees, primarily consisting of large maples. Colonial Place's initial development constituted roughly nineteen dwellings between the years 1903-1911. Development was slow, substantially hindered by stiff competition and a citywide building slump. Consequently, the Development Company abandoned its original "high-class" image, allowing the community to thrive as a solidly middle class community. Growth of this middle class neighborhood was accelerated as the First World War launched a trend of housing needs nationwide. These needs created a second phase of development that included just over 750 buildings between 1912 and 1941. As a result, Colonial Place became defined by a variety of 20th century architectural styles and building types ranging from high style to vernacular interpretations of the elaborate styles erected decades earlier. The area making up the Colonial Place historic district presently consists of approximately 913 single-family dwellings, 43 multiple-family dwellings (including condominiums), a school, a gazebo, a pump house, four landscaped parks, a church, a monument, three secondary resources, and 353 supporting outbuildings, which includes sixty-seven sheds and 282 garages.

The boundaries of the Colonial Place Historic District occupy approximately 202 of the original 220 acres conceived in 1903 by the Sterling Place Company as Colonial Place. Colonial Place became a cohesive residential neighborhood just to the east of Riverview, on a peninsula jutting north into the Lafayette River. The surrounding water, originally known as Tanner's Creek, distinctly forms the northern boundary of the neighborhood, with Knitting Mill Creek forming the western edge and East Haven Creek defining the eastern border. The topography-created boundaries are delineated by the streetscape with Mayflower Avenue encircling the community on three sides and 38th Street forming the southern boundary. Aligned with the landscape, the streets were laid on a slightly angled north-south axis along the central peninsula, with bisecting cross-streets. Landscaped traffic circles, crescents, and avenues further distinguished the plan.

Marked by its collection of early 20th century revival and American movement buildings, Colonial Place is an example of the residential subdivisions that emerged as the suburbs of Norfolk expanded with the advent of the streetcar and automobile at the turn of the 20th century. Such communities offered residents a scenic alternative to the dense inner city older neighborhoods. George W. Dillard, area developer and president of the newly established Sterling Place Company, submitted the original plat in 1903 for the subdivision of Colonial Place, which was originally conceived as Sterling Place. The community, consisting of over 220 acres, was laid out specifically to attract middle and upper income residents. The building requirements, extensive services, restrictions, attractive landscaping and often generously sized lots attest to the development company's desire to attract a certain class of people. Based on original plat maps of the community, the area was developed over several decades between 1903 and 1941, with additional infill development occurring later. Organized along the curvilinear waterfront, the streets were constructed along the slightly angled north-south axis of the central peninsula, with bisecting cross streets. The monotony of the ubiquitous grid plan was intentionally avoided through the introduction of a series of traffic circles, crescents, and squares. The peninsula extends into the Lafayette River and offers exceptional views and a bucolic setting. The community was further distinguished by the naming of its streets using a unified colonial theme, in keeping with the much-touted 1907 Jamestown Exposition.

The houses along the northern semi-circular edge are substantial in size and are set well back from the road with large grassy yards in front. The interior housing lots include a variety of building forms and sizes, ranging from large two-and-a-half-story brick dwellings to smaller, bungalow residences. In general, the larger houses are set upon sizeable lots, while the smaller houses are set upon narrow lots and separated by narrow alleys or driveways with freestanding garages and sheds. The chronological development is visible in terms of the architecture, which includes a wide range of building dates ranging from 1906 to infill housing of the late 1990s. The neighborhood is generally defined by its eclectic collection of Colonial Revival style houses, ranging from the Georgian Revival, American Foursquare house to the Craftsman Bungalow to the Tudor Revival and Spanish Mission-revival style dwelling.

As a whole, Colonial Place has achieved significance as the product of a distinctive period whose individual components combine to create a distinguishable entity with high artistic value, based upon the original plans of the developers. [The district] ... is significant under the themes of architecture and community planning/development with the period of significance extending from 1903 to 1941. The neighborhood consists of 1,321 resources (including approximately 913 single dwellings, 43 multiple dwellings, a church, a school, a gazebo, a monument, a pump house, three secondary resources, and four landscaped parks). There are 792 contributing primary resources and 176 non-contributing primary resources, supported by a total of approximately 353 secondary resources.