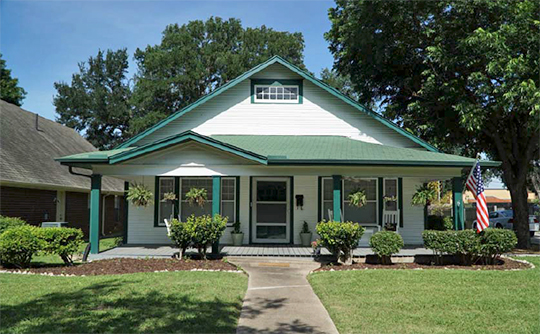 The Travis College Hill Historic District [‡] was listed on the National Register of Historic Places in 2017.

Travis College Hill is in the city of Garland, Texas, approximately 15 miles northeast of Dallas in northeastern Dallas County. It lies within the Texas Blackland Prairies eco-region, an area running south of the Red River on the Texas-Oklahoma border through the Dallas-Fort Worth metropolitan area and into southwestern Texas. Historically composed of tall grasslands, much of the region was converted to cropland by the end of the nineteenth century in the Garland area. Just northeast of the district is one of the highest topographic points in Garland. Once home to Garland's sole school, the site is now occupied by an alternative school in the Garland Independent School District. The Travis College Hill District is stationed southwest of the central Garland business district. The two-block-long neighborhood sits near the top of an incline that slopes gently westward toward Duck Creek and northward toward the central business district. Duck Creek begins near the Dallas-Collin County line and takes a diagonal path through portions of Richardson and on into Garland, bisecting the city from northwest to southeast.

The Garland High School campus lies to the immediate west of the district's western boundary. Facilities of the First Baptist Church and First Presbyterian Church lie to the immediate east. Apartment buildings occupy portions of an adjacent block to the north. The downtown Garland business district begins about four blocks to the northeast. Thus the areas to the east, north, and northeast have a markedly contrasting character to that of Travis College Hill. Two apartment complexes stand north of Avenue B (northern boundary); Avenue D comprises a clear southern boundary to the district, with residential homes of varying vintages and integrity sited to its south.

The district consists of homes along the west and east sides of S. 11th Street, between the northern and southern borders of Avenues B and D. All of the district's eleven contributing dwellings face S. 11th Street and are detached single-family residences. Every home is set back an average of about 40 feet from curbside. Each house has a paved concrete driveway that leads to a garage or carport. Five of the district's contributing properties have detached garages to the side of their lots, with one connected to the home by a covered walkway. Additionally, two of the eleven contributing homes have small ancillary frame sheds/storage buildings. The property on the east side of the 300 block is excluded from the district, as these lots originally contained four historic homes, built in the 1910s and 1920s, that were razed by an adjacent church in 1997 for paved parking and green space.

While the eleven contributing dwellings are of differing styles, common features are present in a majority of homes including one and two-bay wings, typically adjacent to either one or more facades creating a cross gable roof form. Five of the district's eleven contributing residences are one or one-and-a-half story, wood-frame Craftsman Bungalows constructed between 1913 and 1927. Common Craftsman stylistic features, such as foundation skirting, exposed rafter ends, triangular knee braces, unenclosed eave overhangs, and porches are present on every contributing bungalow in the district. Three homes, 313, 404, and 309 S. 11th Street, can be classified as vernacular or Minimal Traditional with elements of Craftsman and other contemporary styles. Two Ranch-style homes and one Queen Anne are the district's remaining three contributing homes. The house at 317 S. 11th Street is a 1901 Queen Anne-inspired, one-story frame house with a dramatic multi-gable design. In 2014, the home was moved from a location in downtown Garland to a newly created lot in Travis College Hill. Properties at 412 and 311 S. 11th St. are both brick Ranch-style houses constructed between the 1950s and 1960s. The property at 403 South 11th is the only noncontributing building within the district's boundaries. Constructed in 2001, this modern red-brick house does not add to the historic character of Travis College Hill. The following table includes a complete listing of primary resources within the Travis College Hill historic district and notes the date of construction, style, and contributing status of each resource.

In addition to the twelve primary homes, a handful of axillary structures are present within the boundaries of the district. Most of these secondary resources were erected within the period of significance and typically echo the main houses in detail, adding to the overall quality of the district's historic fabric. These resources are classified as contributing and noncontributing based on their individual integrity and overall contribution to the district and their individual properties.

The Travis College Hill neighborhood remains in almost an identical configuration as when it was originally platted. The southernmost segment of Travis College Hill, as subdivided in 1913, was composed of 36 east/west-oriented lots. The original lots in Travis College Hill were between 50 and 65 ft. wide by 190 ft. in length. The corner lots in blocks A and B were larger than the ones in between them. The lot sizes added to the new addition's appeal, since the lots also could accommodate water wells, outhouses, chicken coops, small barns, gardens, and orchards. A 15-foot-wide alley extended along the rear (west) property lines of lots facing onto 11th Street. The lots in the southernmost section were grouped in three blocks, with sets of six lots on either side of Garland Avenue (11th) Street in each of the three blocks. The northernmost segment was intended to feature residential lots on either side of the MK&T. The addition called for blocks F, G, H, and I on the north side of the railroad between the railroad and Holford (Walnut) street, but in July 1913, Travis filed a revised plat showing that the entire north side of the MK&T tracks was to be occupied by the Farmers Cotton Gin Co. and the Garland Cotton Oil Company. With this change, Travis reduced the number of residential lots by almost half. Block F later became the site of the Craddock Food Manufacturing Company, and became the Garland Post Office site in 1976. Very few residences remain in the original D and E blocks. The area was redeveloped to facilitate commercial business, and the entire east side of Block C has been razed for apartments. Thus, the two-block area of 11th Street between Avenues B and D is the only remaining intact portion of the originally-platted Travis College Hill Addition.