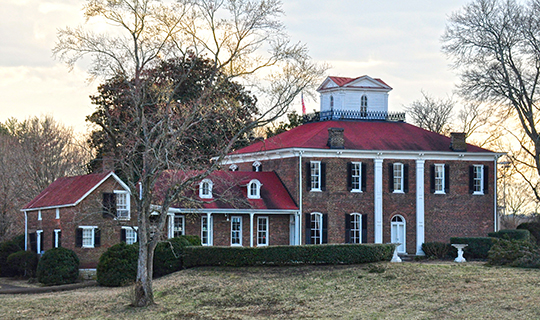 Despite the rapid development of the past twenty years many sections of Williamson County remain largely unchanged, especially in the southwest and southeast sections. In 1980, one-third of the county remained forested and there were 1,595 operating farms with the average size of each farm at 153 acres. Franklin has designated two large areas of the community historic districts and the retention and renovation of historic structures is an important part of community life. Williamson County is at a crossroads regarding the protection and preservation of its historic structures. The city and county planning agencies are seeking ways to retain the heritage of the county while accommodating new growth.

After the Civil War most of the large and ornate residential and commercial buildings were constructed in Franklin. A number of fine Italianate and Second Empire style residences and stores were constructed around the town square from 1865 until 1900. Only a few large Italianate residences were built in the rural areas of the county in these years. The majority of historic structures which survive in Williamson County are frame buildings constructed between 1875 and 1910 in rural areas of the county and in the Franklin historic districts. Most of these fit into several categories of building plans and forms and are generally unpretentious interpretations of the styles of the period.

After 1900, Franklin's population grew as new roads and railroads connected the town with Nashville and adjacent counties. From 1900 until 1940 most of the notable residential architecture built in these years took place in Franklin. Houses reflecting the Colonial Revival, Bungalow and English Tudor styles were built in the Hincheyville area and along Lewisburg Avenue. Most of these houses were built on small lots creating a dense and compact streetscape in the areas around the public square. There are no examples of the Art Deco or International Style in the residential areas of Franklin but some commercial buildings in the downtown area do have Art Deco inspired detailing. After 1940, the architecture of the county followed established national trends with many new subdivisions and tract housing built outside of Franklin and in Brentwood.