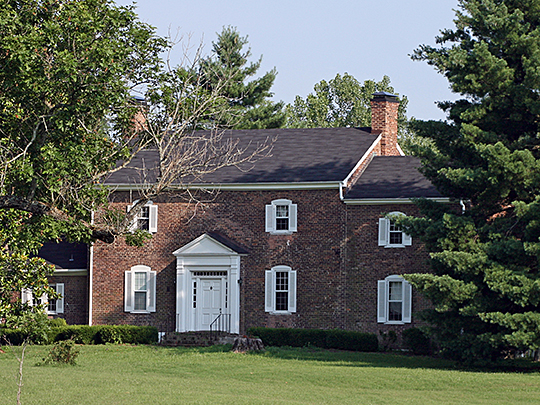 In the northern section of the county the dominant community was Brentwood with a population of 200. The first official mention of the community occurred in the mid-1850s when the railroad was constructed north of Nashville through Williamson County. The town became a rail center for the northern section of the county by the 1870s a flour mill and woolen mill were in operation. Brentwood was also listed as containing two saloons and five general stores in addition to the woolen mill. Other important crossroads north of Franklin included Forest Home which had a store and post office and Grassland which was listed with a population of 20 in 1887. Centered around the William Leaton House known as Grassland was a post office, two grist mills and several livestock dealers.

One of the most prominent families in the northeast section of the county were the Sneeds who came to Williamson County along with the Perkins family in 1798. James Sneed was a native of Virginia and married Bethenia Perkins. Sneed served in the Revolutionary War and received a land grant of 640 acres in the area just southeast of present day Brentwood. He built a log home on this tract which still stands although significantly altered. His oldest son, Constantine Sneed constructed a two-story brick residence known as "Windy Hill" ca. 1828. Two other sons of James Sneed constructed log and brick homes nearby the original Sneed homeplace. Both homes were built in the early 1830s and although they still stand they have been significantly altered.

Also receiving a 640 acre grant for Revolutionary War services was Andrew Crockett. Crockett settled southeast of Brentwood and constructed a log residence by 1799. This residence was later enlarged ca. 1850 but the original log pen of the Crockett House remains. His son, Samuel Crockett, later began the construction of a two-story brick residence he completed ca. 1808 and named "Forge Seat". In addition to the house Crockett also constructed a log building containing a forge where he made iron implements and specialized in rifle making. Crockett's guns were in great demand and Andrew Jackson purchased several on his way to New Orleans. The log building containing the forge still stands adjacent to Forge Seat.

Thomas Wilson moved to Williamson County in the early 1800s and his family built log homes on several hundred acres southeast of Brentwood. His grandson, James Hazard Wilson II, became a prominent landowner and businessman. In 1825, Wilson constructed a two-story brick home he named "Ravenswood". Wilson later built "Century Oak" and "Inglehame" for his children. Inglehame later burned and has been remodeled. Wilson Pike was named in honor of the Wilson family.