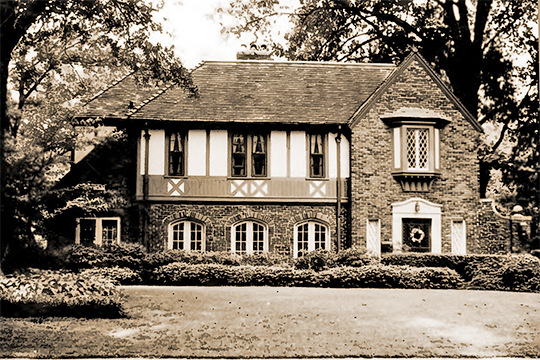 The Overton Parkway Historic District was listed on the National Register of Historic Places in 1999. Portions of the content of this web page were adapted from a copy of the original nomination document. [‡]

Lick Creek shaped the gently rolling terrain of the surveyed area. Lick Creek originates north of Overton Park and enters the district at Jefferson and Cooper and exits at Madison and Cox. It has been contained with concrete culverts or covered over entirely. The culverts are not visible in the district. The area's streets are arranged in a bilateral grid pattern and lot orientations are related to a period of subdivision development known as the automobile suburb pattern. Most of the interior streets were opened in the early twentieth century. Streets vary from 25 to 160 feet in width. The primary streets are covered with asphalt. The alleys located in the area are generally no longer maintained by the city, however, they are still passable and are used by residents. The public sidewalks are poured concrete and generally have a four foot green space between the sidewalk and curb.

Mature deciduous trees, such as oak and maple dominate the landscaping of the Overton Parkway Historic District, which form green vaults over the streets creating a forest-like effect. Evergreen species of cedar, American holly and native and exotic magnolias add contrasting colors and textures during the summer and winter. Wide, carefully tended lawns and flowering bushes add to the grace and space of the area. Outbuildings in the district are mainly garages located on the rear of many lots. The charming garages often repeat the style of the main house and vary in size up to three cars large. Many of the garages have living quarters above them.

The character of the neighborhood is defined by a notable concentration of buildings in the Tudor Revival style. Along with three stucco and board and batten apartment buildings, 2155 Poplar at Cooper Street, the district features a number of private, single family dwellings that exhibit attractive variations on Tudor Revival style architecture, especially on Poplar, Washington and Edgewood. Outstanding examples of Tudor Revival variants are located at 2143 Poplar Avenue, and 2150 Washington Avenue.

Although dominated by the Tudor Revival style, the district contains a variety of styles. Craftsman Bungalows and Queen Anne influences tend to dominate in the western area of the district. A Queen Anne cottage is located at 20 Cooper Street and Craftsman bungalows are found at 2180 Court and 2224 Madison. A number of large eclectic style homes are located in the blocks adjoining East Parkway. These include mixtures of Colonial and Classical Revival, Mediterranean Revival, and Spanish Colonial Revival.

In the late nineteenth century, the area where the present day Overton Parkway Historic District is located was comprised of small, unincorporated towns. This eastern suburban expansion was spurred by the franchise of the Citizen's Street Railway Company on April 12, 1887. The Citizen's Street Railway Company asked for a charter to begin work on the East End Dummy Line, a steam rail to connect downtown with East End and Montgomery Parks via Madison Avenue. It was always the plan of the dummy lines to have a suburban terminal end at a park. So, in July, 1887, the old McLean Homestead, a 233 acre tract of land bounded by Madison Avenue on the south, the Overton woods on the north and Cooper Street on the east was opened as the East End Park. The original East End Park had a forest named Bellaire Woods on the north end, Rainbow Lake (created by damming Lick Creek) for rowboats, a pavilion and picnic grounds. Five years later, in 1894, the East End Park was renovated and drew pleasure-seeking Memphians with such sedate pleasures as a merry-go-round, balloon ascensions and theatrical presentations.

It was not until 1903, when Col. John D. Hopkins and the Memphis Street Railway created the East End Amusement Park by signing a five-year lease, that the park attained its legendary popularity. A colorful (and often profane) entrepreneur, Hopkins was responsible for adding the amusement rides such as the Crazy Eight roller coaster, a scenic miniature railway around the lake, and penny arcades. The biggest draw was a beer garden complete with a cooling tanbark walk. There was public dancing with dance orchestras as well as attractions like W. C. Handy's jazz band and the Royal Hawaiian Band, top-notch vaudeville acts, stock theater companies and one-and-two reel pictures. Monday night was society night and there was an annual Easter Egg Hunt sponsored by the Commercial Appeal. Part of the East End's success was due to the fact there were no downtown movie houses and no summer stock companies during its early years. The East End Railway made this part of the county attractive to developers. The East End Park closed its gates in 1914 when it was placed in the hands of a receiver.

One of the eastern suburban developments around this same time was the town of Lenox. The original Lenox began as a subdivision in 1890 platted by the Equitable Land and Construction Company. Originally a residential suburb outside the city limits, the town of Lenox was incorporated in 1896 in order to get paved streets and a school. The boundaries for Lenox are unclear but appear to have been Rembert Street and possibly parts of Tucker on the west, Trezevant (East Parkway) on the east, Poplar on the north.

By 1899 the northeastern part of Lenox was re-subdivided as the Lenox Land Company according to a plat map recorded in that year. The ninety-lot subdivision was bounded by Poplar Avenue on the north, Cooper Street on the west, the rear property line of Jefferson Avenue on the south and Trezevant (E. Parkway) on the east. The Lenox Land Company was developed by L.W. Dutro, president, and A.J. Williford, secretary, and by the Cole Manufacturing Company, William Cole, president. President Dutro also owned the medical and dental supply firm of Dutro and Hewitt; was president of the Memphis Mining Company; and of the Memphis Tropical Fruit and Rubber Company. Dutro was also named Memphis postmaster in 1899 and was responsible for the 1903 addition to the U.S. Post Office on Front Street (NR 1980). Secretary A. J. Williford was elected a public administrator for Shelby County in 1898 and was a Mason and a justice of the peace.

Growth in the Lenox Land Company subdivision was stimulated by the creation of Overton Park (NR 1978) in 1901 and the 1904 development of the Parkway system (NR 1989). After the 1909 annexation by Memphis out to East Parkway, residential construction on the new eastern edge of the City began in earnest, quickly obliterating most signs of the old suburban towns.

In the era before World War I, the area of the Lenox Land Company subdivision bordering on the Overton Park/East Parkway area was considered among the most desirable residential areas for upper middle class Memphians, literally the area where old money met new money. The real impetus for upscale development in the district came in 1912 when the Lenox Land Company subdivision was re-subdivided as the 25-lot Overton Park Subdivision by Ben Goodman. Goodman was president of the Suburban Land Company, the Oak Lawn Land Company and the Ridgeview Land Company. This is, generally, the District. Living here in large luxurious houses on landscaped lots were industrialists, cotton factors, and steamship line owners living side by side with soft drink bottlers, car dealership owners and real estate developers. By 1925, the Overton Park Subdivision residents included William Crawford, president of the Commercial Appeal; J.W. McClure, president of Belle Grand Lumber Company; Abe Goodman, real estate and vice-president of the Memphis Motor Company; R.E. Lee, president of the Valley Line Steamship Line; J.E. Pidgeon, Manager of the Coca Cola Bottling Company; and Philip Pidgeon, vice-president of Pidgeon-Thomas Iron Company.

Prominent local architects known to have designed buildings in the subdivision include George Shaw who designed the W. J. Crawford house at 1 East Parkway, one of the finest Colonial Revival houses in town; Everett Woods; and Mahan and Broadwell who were architects for the 1921 first John Sneed Williams House at 123 East Parkway. The John McClure House at 65 East Parkway was designed by the firm of Jones and Furbringer in 1920. Other earlier Jones and Furbringer houses in the district include the 1917 Flippin House at 2284 Court; the 1915 Max Heilbronner House at 2221 Poplar Avenue, and the 1915 David Sternberger House at 2245 Poplar.

The Overton Parkway Historic District displays superb examples of the finest high style architect-designed eclectic styles of the early twentieth century and is also associated with several local architects, as well as the aforementioned individuals of prominence. It is hoped that the District's National Register listing will increase interest in local historic district designation. The wonderful housing stock and prime location continues to draw middle and upper class residents to the area. It is an excellent local example of an early twentieth century upper class neighborhood dominated by a variety of popular architectural styles, many of which were probably architect designed.