Photo: Home in the Glenwood Historic District, Clarksville, TN. The Historic District was listed on the National Register of Historic Places in 1996. Photographed by user:Sbugsyk (own work), 2012, [cc-by-3.0 (creativecommons.org/licenses/by/3.0)], via Wikimedia Commons, accessed January, 2016. 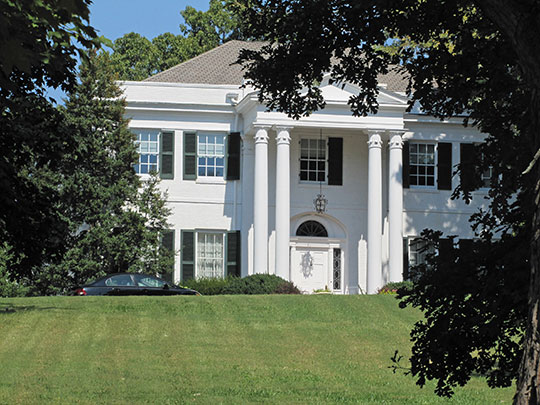 The Glenwood Historic District was listed on the National Register of Historic Places in 1996. Portions of the content of this web page were adapted from a copy of the original nomination document. [‡]

Located in southeast Clarksville on Glenwood Drive at Madison Street, the Glenwood subdivision is an excellent example of an early twentieth century middle class suburban neighborhood. Planned and developed in two primary phases, 1924-1935 and 1936-1946, the subdivision clearly demonstrates the evolution from larger 1920s and early 1930s dwellings, which retain an emphasis on historical detailing, to smaller dwellings of late 1930s-early 1940s, which herald the evolution of Ranch style dwellings. The larger houses all stand on large, irregular lots with detached garages, many with spare rooms above the garages for servant's use. The earlier houses, largely built for middle class families headed by husbands in management, are larger dwellings with sizable, high-maintenance yards. Such properties were feasible considering the availability of domestic assistance. With the second phase of the subdivision's development, ca. 1936-1946, one sees the transformation from homes built with servants in mind to single family homes managed entirely by the wife. These newer homes are typically one to one and a half stories, more compact in plan, situated on a much smaller lot and generally have integral garages.

Although the interpretation of early and mid-twentieth century architectural styles in the Glenwood Historic District is typically vernacular, with few landmark examples, the architectural and historical integrity of the subdivision is impressive. Remarkably, Glenwood retains the stable atmosphere associated with moderately affluent suburbs of the early twentieth century. The combination of bungalows, English Cottage and Colonial Revivals situated on large tree-filled lots overlooking a common park in which stands a Colonial Revival mansion (built originally in 1857) accentuates the historical sense of time and place of the district. The gently curving Glenwood Drive splits to form East and West Glenwood Drives which meander around the subdivision in an elongated horseshoe shape reminiscent of late nineteenth century park design. The maturity of the vegetation and wide spacing of the structures in combination with the conservative vernacular adaptation of the architecture contributes to the stable ambiance of the neighborhood. Containing a total of 78 properties (56 houses, 21 garages, 1 site), Glenwood provides a largely unaltered showcase of individualized popular early twentieth century styles such as Colonial Revival, Cape Code Colonial Revival, Tudor Revival, English Cottage Revival, bungalow and bungalow influenced, and Minimal Traditional.

The older portion of the subdivision, dating from ca. 1924-1935, begins at the junction of Glenwood Drive and Madison Street and continues half-way up the arms of the split of East and West Glenwood Drives. Overlooking the communal park, which is maintained by annual resident contributions, the lots are large and well-landscaped with mature deciduous and evergreen trees, shrubbery and flower beds. The majority of these houses are Colonial Revival and English Cottage Revival with several bungalows and Minimal Traditional with English Cottage Revival influence. They have either weatherboarding or brick, and several display random course stone foundations and accents. Although most of these structures represent the prevalent trends in housing styles of the 1920s and 1930s and are well suited to their location, few could be called a landmark representation of a particular style. The one exception is the Craftsman Bungalow house at 105 Glenwood Drive whose purity of interpretation approaches landmark status. Aside from this particular structure, each house or cottage is an easily recognizable individualized interpretation of popular early twentieth housing styles.

The District also includes a substantial Park site, integral to the original design of the subdivision as a suburb with open, landscaped spaces and a typical "country" atmosphere. Glenwood Historic District also exemplifies the transition from rural country estates into suburban neighborhoods, and reflects early twentieth century trends in suburban planning and development. The Glenwood Historic District evolved from a single, country estate established outside the city limits of Clarksville in 1857 into a multi-residence automobile suburb laid out in 1924 and developed over the next twenty years.

Originating as an automobile suburb in the mid-1920s, the Glenwood Historic District experienced a second period of residential construction in the late 1930s and early 1940s. Between 1924 and 1936, Glenwood existed as a semi-exclusive suburban neighborhood beyond the city boundaries.

The appeal of suburban living in turn-of-the-century Clarksville was also the product of American popular culture just as much as it was of real urban conditions. Many late nineteenth century authors, artists, civic leaders, and scholars criticized urban living because it contrasted with idealized notions of an agrarian past. They advocated healthful qualities of nature and promoted pre-industrial artisan crafts as beneficial, both physically and aesthetically. Primarily a response to the uncertainty of industrial capitalism, such beliefs manifested themselves in landscape art, dime novels, romantic literature, the Arts and Crafts Movement, and the City Beautiful Movement. As a result, popular perceptions of the urban environment's dangers and unhealthy qualities became well known to turn-of-the-century Americans, whether or not they really existed in a given locale.

The conscious desire to live in suburban or rural locations away from the urban environment continued into the twentieth century and was furthered by the invention of the automobile. The mass production of inexpensive automobiles freed residents from a dependence upon the streetcar's fixed routes and allowed them to establish suburban residences even further removed from the city center. The first automobile to appear in Clarksville passed through the town in 1902. In subsequent years, the automobile increasingly became an important form of transportation in the city.

These changes culminated in a new understanding of suburban living in the early twentieth century. In Clarksville, the automobile facilitated the development of several new middle class neighborhoods along Madison Street, then outside the city limits. These neighborhoods were more akin to the natural environment and contrasted with older neighborhoods such as Dog Hill because of their overall form and planned design. Rather than implementing a gridiron street plan, developers utilized elements of the natural landscape and placed residences in harmony with an area's natural topography. Consequently, lot sizes were large and irregular, streets were curvilinear and hilly, and new developments frequently incorporated small parks. Developers also implemented the use of deed covenants in order to direct future development and maintain the residential character of their neighborhoods. They likewise desired to create neighborhoods that realized their own conceptions of an "ideal" community.

The Glenwood Historic District exemplifies this transformation of rural country estates into suburban neighborhoods and reflects early twentieth century trends of suburban planning and development. Prior to the establishment of Clarksville's streetcar system and the automobile's arrival, Madison Street possessed a series of rural estates. Dating to the mid nineteenth century, these estates typically consisted of large houses, many acres of land, gardens, outbuildings, and long winding drives. "Tip Top" (15 Trahern Terrace) and "Oak Top," two of Clarksville's better known historic homes, are remnants of once large estates in the Glenwood Drive area.

The subdivision's development was a gradual process. After Speight's initial attempts at large-scale development, residential construction in the district proceeded in a piece-meal fashion until 1937. People purchased lots from George Fort and constructed residences in an individual manner. Many of the subdivision's original residents were owners or managers of Clarksville businesses and lived in homes constructed by their employers. For example, the Condon Tobacco Company (later the American Snuff Company) constructed residences at 104 and 106 Glenwood Drive in 1926 and 1927. These houses were the homes of Raymond A. Condon and his brother C. A. Condon, president and vice president of the company. Similarly, the wholesale grocery firm of Ragland and Potter built 127 Glenwood Drive circa 1930, and the Acme Shoe Company built 102 Glenwood Drive in 1929 for Sydney Cohn, son of the owner and president of the company. The subdivision's middle and upper class character also attracted faculty members of the newly opened Austin Peay Normal School. John Barn and his family erected a house at 123 West Glenwood Drive in 1931.

Much of the Glenwood Historic District's housing construction from the late 1930s and early 1940s resulted from the FHA's aggressive promotion of new building attitudes. Since the FHA assumed final repayment of housing loans, it required that builders follow certain standards of construction. For example, the FHA suggested house plans that had simple lines and were designed for middle class families. Commonly referred to as the Minimal Traditional style, these houses were simplified forms loosely based on the Colonial and English Cottage Revival styles of the 1920s and 1930s. The cultural ideas engendered in these styles likewise reflected Progressive Era notions of public health and ideal standards of living. The FHA promoted these beliefs through local newspapers and FHA approved house plans appeared in the Clarksville Leaf Chronicle throughout the late 1930s. Several Clarksville developers, including the Manning and Orgain Supply Company and the Merritt Stave & Lumber company, advertised themselves in the Clarksville Leaf Chronicle as capable of meeting the FHA's style and material requirements.

After World War II, the Glenwood Historic District maintained its character as a middle class suburban neighborhood, although it may now be considered an urban neighborhood. This consistency reflects the early attempts of George Fort and Clarence Speight to create an ideal, controlled environment removed from the undesirable characteristics of the city center. Deed restrictions regulated later development in the 1920s neighborhood, and the placement of a park and other planned features maintained the district's suburban appearance. These qualities create an interesting contrast between the district's earlier period of housing construction and the later developments that did not include stringent deed covenants. Socially, many of the developers' early aspirations are also maintained as current residents consider the neighborhood to be a close community. For example, the neighborhood holds a picnic every September and all residents and former residents of Glenwood are invited. Other community activities include sledding whenever it snows. The Glenwood Historic District exists as a significant example of early twentieth century residential architecture and of community planning and development.