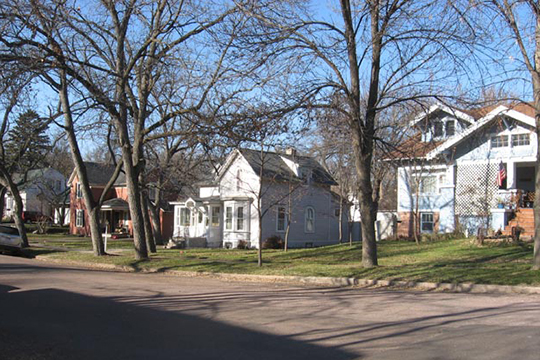 The Dell Rapids Residential Historic District was listed on the National Register of Historic Places in 2000. Portions of the content of this web page were adapted from a copy of the original nomination document. ‡

The first stage of development in the district spans the two decades between 1880 and 1900, a time in which Dell Rapids grew from a population of 900 to a population of nearly 1,500. This era is characterized the fine collection of Victorian Era residences that are found throughout the district. The early history of the Dell Rapids Residential Historic District coincides with the "Great Dakota Boom" of the 1880s. The boom, which began about 1878, was a period of rampant growth and unparalleled economic development in Dakota Territory. Throughout this period, tremendous number of settlers moved into the territory. By 1889, enough people had settled in the territory so that South Dakota could be granted statehood.

The first houses built in the area around the district were completed in the late 1870s. However, it was not until the early 1880s that the first building frenzy began. Throughout the 1880s and early 1890s, there was a steady stream of new residences in the district. The boom came to an end in 1893, when a major economic depression overtook the nation. It was within this prosperous era leading up to 1900, in which the majority of the houses in the district were built. Residential styles of this era that are found in the district include Gothic Revival, Second Empire, Italianate, and Queen Anne. There were also a number of are Victorian Vernacular type residences built in the district during this time-period.

The Second Empire style was dominant in American architecture from 1860 to 1890 being popularized in the northeastern and Midwestern states. The houses in the Dell Rapids district reflecting the Second Empire style are characterized by a distinctive mansard roof, decorative brackets and occasionally a tower is present. The Italianate style was most popular from roughly 1840 through 1885, although it did persist into the 1900's in South Dakota. The style is typified by two stories; low-pitched roof with wide overhanging eaves having decorative brackets beneath; tall, narrow windows, commonly arched or curved windows with elaborate window hoods. The houses in the Dell Rapids district that exhibit this style are a typical representation of the Italianate style and the romantic movement in architecture.

The Queen Anne style was most popular from roughly 1880 through the turn of the century, although it did persist into the mid-1920's in South Dakota. The style is typified by irregular, steeply pitched roofs, asymmetrical facades and decorative elements to avoid flat walls. The houses found in the Dell Rapids district exhibiting the Queen Anne style are a typical representation of the style and the picturesque movement in architecture.

The second period of development in the district spans the years from about 1900 until the 1920's. This era is characterized by a slower, but relatively steady period of development in the district. Although the population of Dell Rapids grew by twenty-two percent during the 1920s, building activity in the district did not match this statistic. The slower rate of development was not caused by the downturn of this area of Dell Rapids, rather, it was due to the fact that the district had been almost completely developed by the early 1920s. There were simply no more vacant lots left in the district by the late 1920s. Houses built in the district during this era encompass several architectural movements, including Neo-Classicism, Prairie School, and Craftsman. Neoclassical architecture had two waves of popularity in South Dakota, from 1900-1920 & 1925-1950. Those houses exhibiting Neoclassical elements are found to be constructed between 1900 and 1920. They are characterized by a facade that is dominated by a full-height porch with the roof supported by classical columns. The facade also features symmetrically balanced windows and a central door.

The Prairie style is concentrated throughout the United States in early 20th century suburbs. Vernacular examples were spread widely through pattern books, most being constructed between 1905-1915. Those Prairie style houses found in the Dell Rapids district fall into this significant time frame. They can be identified as Prairie with their low-pitched roof, wide overhanging eaves, details emphasizing the horizontal lines, and often having a massive square porch.

Houses in the Dell Rapids district exhibiting the Craftsman style are abundant. This was the dominant style for smaller houses throughout the country from 1905-1920. The style rapidly faded after the 1920s. The style is identified by the low pitched roof with unenclosed overhanging eaves, exposed roof rafters, decorative beams under the gable and full or partial width porches. The porches often have tapered square columns for support. As the Dell Rapids Residential Historic District has a variety of architectural styles, it reflects trends across the both South Dakota and the United States. This residential district is significant to the community of Dell Rapids as the most complete and cohesive representation of architectural styles in the town.

One of the most prominent buildings constructed during the district's second phase of development was the Carnegie Library. Efforts to build a library in Dell Rapids began as far back as 1901. At that time, the local women's club kicked off a campaign to raise funds and solicit grants from several philanthropists. Industrialist Andrew Carnegie gave the women a favorable response and offered to give the city $6,000. Before he would donate the money, Carnegie stipulated that the town would have to appropriate $500 for maintenance and its population would have to increase to 1,500. Consequently, the town had to wait several years, until it grew enough to meet the requirements of the grant. Once this was achieved, the building committee selected architect B.J. Sweatt of Boone, Iowa to design the library. Construction began in 1909 and the library in early 1910. When the Carnegie Library was dedicated on March 16,1910, it was one of only 19 public libraries in the State of South Dakota. Since its dedication, the library has continued to serve its original purpose, as the only public library in Dell Rapids.