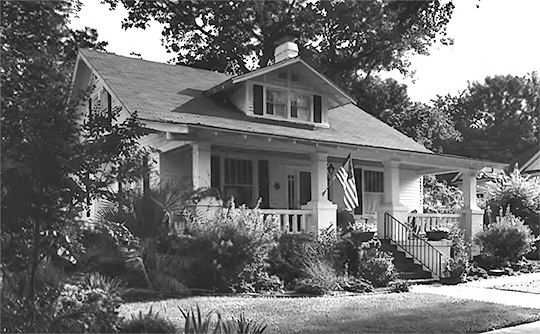 The Old Shandon Historic District [‡] was listed on the National Register of Historic Places in 2003.

This neighborhood, Shandon, was the first planned residential suburb in the Columbia area. By 1895 a map of Columbia "and suburbs" identified Shandon as the area generally bounded by Woodrow, Wheat, Harden, and the streets now known as Santee and Millwood Avenue. The streets within the new suburb had been laid out in a rectangular grid pattern and named Wheat, Blossom, Divine (now Devine), Green (now Lee today), College (now Preston), Cypress, Woodrow, King, Queen, Meadow, High (now Heidt), and State (now Hilton). House lots had been designated only along the east side of Woodrow, but no residences had yet been constructed. Within the largely empty grid of Shandon were four buildings in 1895: one at the corner of Cypress and King, another in the interior of the block bounded by Lee, Meadow, Devine, and Heidt. The third building was the Casino, located at what is now Lee, Santee, and Pavilion. A race track, called Highland Park, extended across the grid between Lee and Cypress and Heidt and King.

The wide streets and generous lots of the area created a park-like setting that was intended to attract professional workers and their families from the urban center. Access to the offices and businesses of the city was provided by the extension of the city's trolley line into the district. The rail line first entered the suburb on its eastern edge, near Pavilion and Santee Streets. It later extended along Divine (now Devine), Maple, and Millwood. Development was initially along these rail lines, especially near the intersection of Devine and Maple. As those lots filled up, development radiated outward. Some lots were subdivided to make room for additional housing. Lots that had been set aside as parkland were platted for residential use. As additional tracts of land were added to the suburb, the trolley line was extended to connect them to Columbia.

By 1912 as many as twenty-three residences had been constructed in the area now designated as the Old Shandon Historic District. By 1919 the area boasted thirty-four residences. Over the next three decades the number had almost doubled to approximately fifty-eight by 1956.

Most of the properties in the district are residences. The earliest buildings were built in the Queen Anne style popular at the turn of the twentieth century. The majority of these houses are two-story residences and exhibit decorative features such as bay windows or canted corners; they are spaced widely apart in the district, reflecting the original plan and the large lots available for sale. Later homes were built towards the trolley line extension which ran down nearby Devine Street and eventually up Maple Street in 1912. Maple, Lee, and Woodrow streets in particular witnessed this early development between 1910 and 1920. New buildings were built in the popular Craftsman bungalow-style of that period. Many of these buildings are one or one and a half stories, of wood- frame construction, and include porches and hipped and gabled roofs with exposed rafters.

As the area continued to grow after the late 1920s, development pushed outward from the initial concentration along the rail lines. Preston and Cypress streets were filled with new construction. Large lots were subdivided to accommodate additional residences. These infill buildings were also of the Craftsman-style, with a handful of Prairie-style homes. Growth is also reflected by the fact that several newer properties were duplexes or apartment houses built for multiple occupants. A few older Queen Anne-style homes have also been converted into apartment housing.