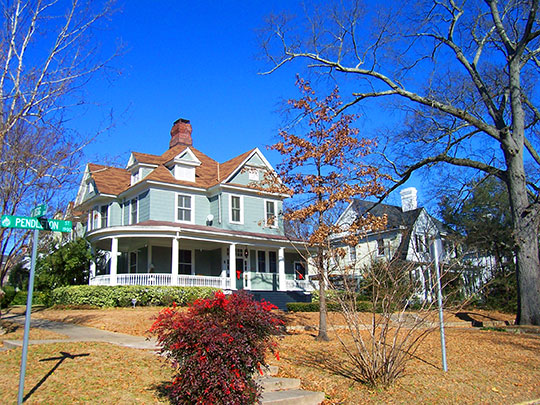 The University Neighborhood Historic District was listed on the National Register of Historic Places in 2004. Portions of the content on this web page were adapted from a copy of the original nomination document. [‡] .

The area roughly bounded by Gervais, Laurens, Greene and Sumter Streets, the historic extent of the University Neighborhood, was part of the original plan for Columbia. In 1786, responding to pressure from back-country voters, the South Carolina legislature passed a bill to move the capital from the coastal City of Charleston to a central location, a site eventually named Columbia. This new city was laid out on the plantation of Revolutionary War hero Colonel Thomas Taylor. When John Gabriel Guignard surveyed the two-mile square parcel of land in 1787, he planned the town with a grid pattern of streets. The original owners of the land in what would become the present University Neighborhood included William G. Richardson, James Hibbert, Elias Horry, James Guignard and R. Stark, but the majority of the blocks in the area belonged to the Columbia Academy.

In the original grid for Columbia's streets, the planners envisioned two main thoroughfares 150 feet wide, with other streets 100 feet wide. The two primary boulevards were intended to be Senate and Assembly Streets, but the development of the city did not follow this plan. A bridge over the Congaree River, constructed at the west end of Gervais Street for practical engineering reasons, funneled traffic onto Gervais Street, making it a de facto main street in the city. As Gervais Street flourished with business and government related traffic, Senate Street developed as a secondary street with a more residential character. This development was important for the present University Neighborhood, as Senate Street became a major residential street in the district.

Another important factor for the development of the neighborhood was its location within the city. It was near the eastern edge of the original city boundaries, with South Carolina College (the present University of South Carolina), located two blocks to the west. Initially this location, one mile from the central part of the city, inhibited growth, but with the chartering of the University in 1801 the location attracted more residents. The presence of Trinity Episcopal Church nearby also affected the neighborhood. The church was established in 1812, on Senate Street between Sumter and Marion Streets, and its proximity appealed to residents, since many of them were active members of the church.

Although the city plan of the 1780s had anticipated the growth of a residential neighborhood in this area, many of the streets and lots were not laid out until later. Before 1850, all of the streets running north-south east of Bull Street went no further south than Senate Street, while Pendleton, Medium (the present College Street) and Greene Streets ran only as far east as Pickens Street. Oral tradition holds that the land south of Senate and east of Bull Streets was farmland, and the presence of large expanses of land held by a handful of owners, namely James S. Guignard, James Gregg and Theodore Stark in 1850, seems to corroborate this information.

These conditions led to a neighborhood that was sparsely populated before 1865. There were only six residences listed in the city directories by 1860, but they were home to a wide variety of people. The maiden Stark sisters, Misses Emma and Martha, lived on the corner of Senate and Barnwell Streets and represented the higher classes of Columbia society, as the Starks were a large landholding family. An architect and a bookkeeper represented the middle class, while a working class contingent, a house painter and a carpenter, also called the neighborhood home. One early residence (outside the boundaries of the district) was the Horry-Guignard House, located slightly to the west of the University District on Senate Street. It was one of the earliest structures in the area. Built in 1813, it was the home of an important family and its presence helped contribute to expansion into the neighborhood. Despite these early residents, during the early years of neighborhood development, there were no street numbers in this area. Before the last quarter of the nineteenth century, in the city directories, the homes are listed by location, utilizing phrases such as "west side of Barnwell, between Senate and Gervais."

After the Civil War, Columbia began rebuilding and attempting to revitalize its economy and population, and as it did the neighborhood also grew. The streets were gradually extended along their original grid plan, although this process was not completed until the end of the nineteenth century. The number of houses in the area also greatly increased. In addition, travel between the neighborhood and downtown was facilitated by the streetcar line that ran down Gervais Street to Harden Street, which was finished in 1896."

The physical development of the present University Neighborhood continued between 1865 and 1895. Senate Street had been extended to the city limits by 1895, with a gap between Gregg and Harden Streets. Pendleton Street had been lengthened to intersect with Barnwell Street, but both College and Greene Streets still ended at Pickens Street. The medians along Senate Street, a prominent feature today, did not exist during this period, but the wide thoroughfare was well landscaped and lined with trees on either side. These street extensions increased the accessibility of the neighborhood, contributing to the population expansion in the district during this period.

Residential growth in the area picked up slightly after 1875 and then seems to have leveled off. In 1868, there were eight residences in the neighborhood, two more then before the Civil War. Seven years later the number of homes in the district had more than tripled, and the area's population would remain relatively static for two decades. This would set the stage for further growth at the end of the nineteenth century and the beginning of the twentieth century, and four of these properties survive from this early period that helped contribute to the growth. One important factor in this growth of the neighborhood was kinship and friendship ties. One instance of this was Wade Hampton Gibbes, who lived on the corner of Pickens and College Streets. His important role in the community may have influenced others to move into the areas surrounding his home, including his brother Alexander Mason Gibbes, who moved into the neighborhood at the turn of the century.

By 1875, the neighborhood had grown enough to require a numbering system for its streets. This system was based on the east-west and north-south orientation of the city. Streets running north-south, such as Henderson Street, were numbered beginning at Senate Street. Addresses north of Senate Street were on North Henderson Street, those south of Senate were South Henderson Street. The same was true for east-west streets, which were numbered east or west from Main Street. Twenty years later, Columbia implemented another numbering system, intended to establish a city-wide standard. This mandated that each block was numbered in relation to the previous one. The base of the block numbers was a scale of one hundred, with each block increasing by one hundred, moving either north or east from the city's edges. For example, the 1700 block of all east-west axis streets was between Henderson and Barnwell Streets, while the next block to the west, between Barnwell and Gregg Streets, is the 1800 block. This is the system currently in use in the city.

The economic characteristics of neighborhood residents were also fluctuating during the last decades of the nineteenth century. In 1875, the people living in the district were overwhelmingly working class: many of the residents were listed as carpenters, blacksmiths or simply laborers. In addition, about two-thirds of those living in the neighborhood were black. The white residents who lived there in 1875 were generally middle-class, including a physician, a lawyer, and an insurance agent. Despite these economic and racial differences, the residents were interspersed throughout the neighborhood, with blacks living next door to whites on most of the streets. This mosaic persisted until the end of the nineteenth century, and while the black residents remained working class and laborers, the white population became more uniformly middle class. In addition, many of these people worked on Main Street, as clerks for large businesses, tellers for banks, or proprietors of their own businesses, which demonstrates how the commute to downtown had become more convenient, especially after the expansion of the streetcar lines.

The residents of the neighborhood had some commercial and religious establishments available to them in the area. Although many of Columbia's businesses were located on Main Street, there were a few available places to shop in and around the neighborhood. The most notable of these was the grocery store of Carolina Alston, a black woman. Her store operated on the northeast corner of Gervais and Barnwell, as from about 1883 until after the turn of the century. Trinity Episcopal Church remained only a few blocks to the west. In addition, the Wesley Methodist Church at 1725 Gervais Street, the northwest corner of Barnwell and Gervais Streets, was established in 1869, and would have provided an opportunity to worship close to home for many neighborhood residents.

Thus, at the turn of the twentieth century, this neighborhood, located directly east of the University of South Carolina campus, was on its way to becoming the middle-class residential neighborhood whose character still exists today.