Photo: The Hale-Elmore-Seibels House, ca. 1796, 1601 Richland Street, Columbia, SC. Most historians believe this is the oldest extant house in Columbia. Listed on the National Register of Historic Places in 1971. Photographed by User:Abductive (own work), 2010, [cc0-by-1.0 (creativecommons.org/publicdomain/zero/1.0/deed.en], via Wikimedia Commons, accessed July, 2013. 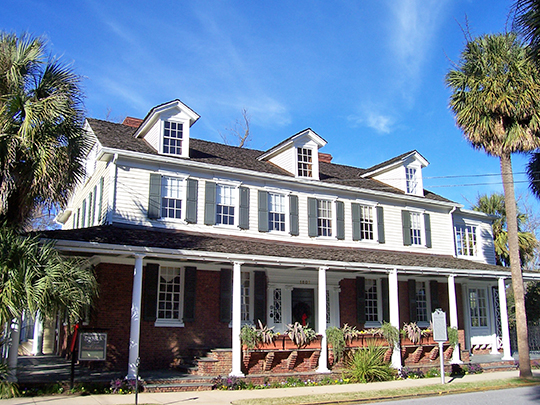 On March 22, 1786 the General Assembly of South Carolina passed an act establishing a new state capital called Columbia to be located on a plateau on the Congaree River just below the confluence of the Broad and Saluda Rivers. Located directly in the center of the state, Columbia was created in an effort to resolve the rivalry between the small farmers and the traders of the upcountry and the large planters and merchant class of the low country. By 1787 a careful street plan for the new town had been laid out. It consisted of a two-mile square grid of broad avenues with a centrally located state house. In 1790, with the new state house ready for use, the official public records for the state were transferred to Columbia. The town's central location soon made it a logical trading point to exchange furs and agricultural produce from the upcountry for sale, manufactured goods and imported products from the Charleston area.

By 1805 Columbia had grown to the point that it was officially incorporated as a town, with a local government independent of the legislature. With the invention of the cotton gin and the development of upcountry as a rich cotton farming area, the town became an important cotton retailing center.

During Columbia's early history, it was primarily accessible by land. In 1824 the completion of the Columbia Canal made the Congaree River navigable and permitted large-scale economic shipment of goods to and from the frontier country of Piedmont South Carolina by water. This greatly encouraged the growth of Columbia as the trade center of central South Carolina. With the coming of the railroad during the decade 1840-1850, all earlier forms of transportation became obsolete as Columbia also became a central location for railroad lines.