Photo: View looking northeast of the Freelove F. and Beriah N. Gaffet House (ca. 1877-1882), 1868 Broad Street. This is the oldest house in the historic district and the only (vernacular) example of the Second Empire style. The Historic District was listed on the National Register of Historic Places in 2014. Photograph by Jane Giannone Moore, 2012, for nomination document, Edgewood Historic District-Shaw Plat, NR# 13000120, National Park Service, National Register of Historic Places. 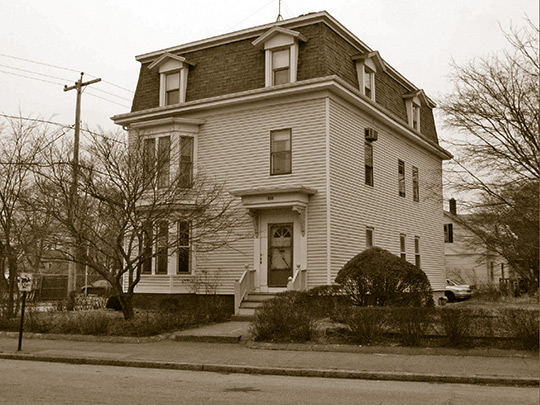 The Edgewood Historic District-Shaw Plat was listed on the National Register of Historic Places in 2013. Portions of the content on this web page were adapted from a copy of the original nomination document. [‡]

In 1853 the heirs of Abby Thornton, who were the nine children of her sister Anstis Greene, sold their late Aunt Abby's 25 acres in Edgewood to Allen Shaw (1810-1887) of Providence, for $3,660—a substantial sum at the time. Providence city directories of the 1850s-1870s list only one Allen Shaw, who was both a painter and a dealer of paints and oils, living on Chestnut Street in that city. Shaw seems to have been part of an emerging trend in this period of well-to-do businessmen purchasing old Edgewood farmsteads for the purposes of real estate speculation, for he was among the first Edgewood landowners to record a plat of house lots, in 1867—one year before streetcar service was introduced on Broad Street (a pending development that neighboring property owners likely knew about in advance).

The Edgewood Historic District-Shaw Plat is significant as a residential subdivision exemplifying the trends which characterized suburban development in Cranston and much of the metropolitan Providence area during the period from the Civil War to World War II. The Shaw Plat represents one of the development patterns typical for this period: the grid-plan Streetcar Suburb, in this case predominantly but not exclusively characterized by larger-than-average lots and single-family dwellings that were designed for both middle-class and more affluent residents. The district's social history illustrates Edgewood's emergence as one of Providence's most fashionable suburbs in the late nineteenth century, and its transformation to its post-World War II role as a stable middle- and upper-income neighborhood. Architecturally, the district's 85 buildings document this process, through a range of types and styles of different periods, with many examples where design elements from different styles were mixed to suit a particular homeowner or developer's tastes.

The district is a quiet suburban neighborhood with tree-lined streets; most of its properties are detached, single-family dwellings set back from the street on grassy lots. There are also six two-family houses, one apartment building, two commercial buildings, a school, and the Edgewood Yacht Club. The prevailing architectural types and styles within the district — Queen Anne, Shingle, Colonial Revival, Bungalow, Four-Square, Dutch Colonial, English Cottage, Garrison Colonial, Ranch, and Modern — reflect its development over the course of more than eight decades. The housing stock ranges from modest residences to imposing houses for well-to-do professionals and businessmen.

Like most streetcar suburbs in Rhode Island, the Shaw Plat is laid out in an orthogonal grid, with two parallel streets—Shaw and Marion Avenues—laid out perpendicularly to the intersecting Broad Street and Narragansett Boulevard. The Shaw Plat, like the Arnold Farm Plat to the north, differs from other local streetcar suburbs, however, in the generous dimensions of its lots on Shaw Avenue. While most local subdivisions of this type contain 4,000- to 5,000-square-foot lots, the four residential subdivision plats that were recorded for this district between 1867 and 1895 consistently provided far more generous lot sizes (in 1867, one to two acres; by 1895, a range of about 7,400 square feet to about 18,000 square feet). The three early 20th-century plats recorded between 1910 and 1932 maintained the tradition of generous lot sizes established by their predecessors, allowing the district to transition easily into an early Automobile Suburb. Many individual lots from the earlier plats provided plenty of room to accommodate driveways, parking areas, and garages. By 1956, after various subdivisions, mergers, and property transfers between abutting property owners, the district had some 56 house lots (plus the school lot) ranging in size from about 2,600 sq.ft. to over 2 acres, with street frontages varying between 45 feet and 300 feet. Today there are a total of 92 lots, seven of which are side or rear yards for adjacent properties. The streetscapes retain their original character of spacious streets and house lots with landscaped front yards with lawns, trees, shrubbery, and planting beds.

The first new house in the district was built ca. 1877-1882; more than half of the current building stock was constructed between ca. 1895 and 1930, and full build-out was largely achieved by the 1950s. The vast majority (75) of the district's houses are detached, single-family, wood-frame dwellings; examples of other building materials are rare, but include brick and stucco. All residential buildings (including the six two-family houses and the one apartment building) are between 1 and 2-1/2 stories tall. Each house has at least a small front yard, a rear yard, and two side yards (one of which typically has a driveway in it). Many of the early 20th-century houses have garages that appear to be original, while on other properties garages were added later. Sixty-five of the district's houses date from the late 1880s to 1930 and represent the standard domestic types and styles common during that period, including Queen Anne, Shingle, Colonial Revival, Bungalow, Prairie, Four-square, Dutch Colonial, and English Cottage. Among the dozen additional houses that were built between 1930 and the early 1960s are several examples of Garrison Colonial and Ranch. Other residential buildings in the district include six two-family houses and a Modern-style apartment building. Four non-residential properties are located in the district: the Edgewood Yacht Club, the Tillinghast Garage, the Albin J. Johnson Building, and the Edward S. Rhodes School.