Photo: This 5 bedroom Colonial at 150 Betcher Road was built circa 1800. It was sold by Keller Williams* after being on the market for only two weeks (14 days). 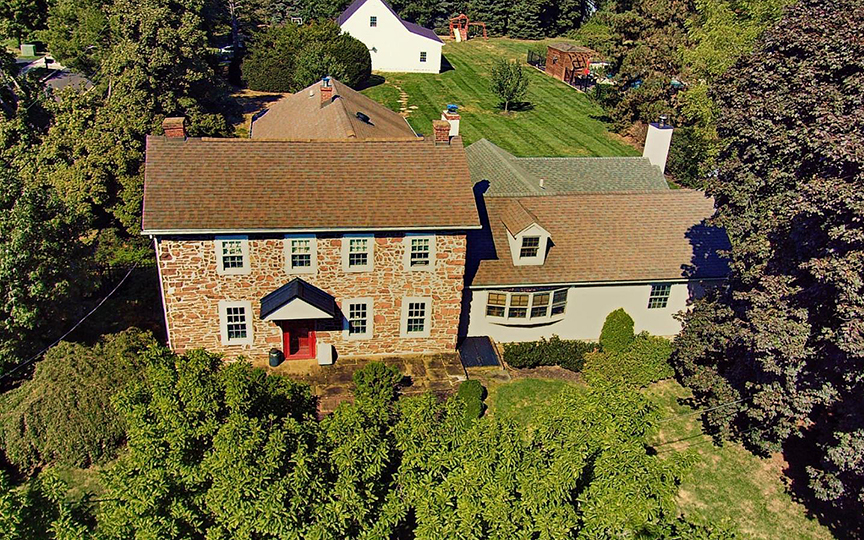 Perkiomen Township is a 4.8-square mile municipality in the west central section of Montgomery County. Located along the Perkiomen Creek, which divides approximately 400 acres from the bulk of the township'''s land area, it historically has been a rural community surrounding the two villages of Rahns and Graterford. It is approximately 30 miles from Center City Philadelphia and within the triangle formed by three of the major urban centers of Southeast Pennsylvania: Reading, Philadelphia, and Allentown - Bethlehem. [1]

The township is bordered by three historic boroughs: Collegeville, Schwenkesville, and Trappe.

Perkiomen Township was once called Skippack and Perkioming Township together with what is now known as Skippack. In 1886, Skippack and Perkioming Township was divided along the boundary of the Perkiomen Creek, establishing two separate municipalities. The name "Perkiomen" is derived from a Lenni‑Lenape word and has been given two different interpretations. The first meaning "the place where cranberries grow" due to the fact that wild cranberries grew along the banks of the Creek and the second being "cloudy waters."

Perkiomen's location along the Perkiomen Creek was essential in the development of several sawmills and gristmills during the 1800s. So that the mills would be accessible by wagon, bridges were constructed near the early mill sites. As a result of this new accessibility, houses and churches quickly developed near the mill sites. These early sites of development are still visible today. They are: East Park Avenue, Plank Road, Graterford, Rahns, and Pennypacker Mills. Pennypacker Mills is associated with George Washington and his troops. They encamped on the site from September 26-29, 1777. The Keely Church (no longer in existence) served as a hospital and burial ground for a number of soldiers.

The villages in Perkiomen are Rahns and Graterford. Rahns at one point in Perkiomen's history was known as "Iron Bridge," although later the term "Rahns" was reborn as the village name. The name "Iron Bridge" came from the iron bridge that was built in 1873 by the County that spanned the Perkiomen Creek.

The Gravel Pike (Route 29) runs through the Township. In 1846 the route became part of the Perkiomen and Sumneytown Turnpike when it was extended through Collegeville and to Schwenksville. Subsequently, a tollhouse was built in Rahns.

The Perkiomen Creek Railroad contributed to the development of Perkiomen Township. The train reached Perkiomen on July 5, 1869 stopping at Skippack Station, slightly north of Graterford. Passenger service ended by 1960 and August 2, 1978 was the last time a freight car passed through town.