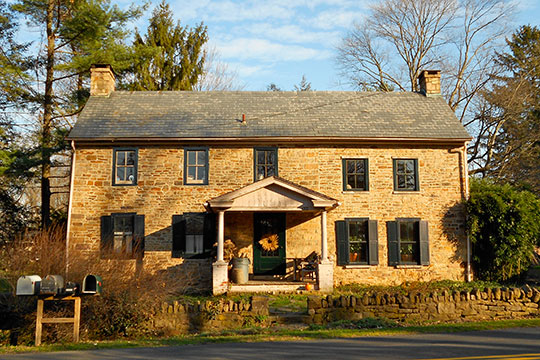 The Dyerstown Historic District [‡] was listed on the National Register of Historic Places in 1987.

The village contains a significant collection of architecture of a higher than average quality workmanship and style than typically found in rural hamlets in northern Bucks County. Dyerstown's collection of fine stone houses with their well-designed proportions and even fenestration presents a neat, handsome village. This is especially well illustrated in contrasting the architecture of the village of Dyerstown with the more typical nearby village of Danboro and hamlets of Fountainville and Kendigtown.

Danboro, on the Old Easton Road at Ferry Road (aka Point Pleasant Pike), located a mile and a half to the north of Dyerstown, is a large random collection of buildings constructed throughout the nineteenth century. Due to the diversification of ownership in Danboro, these buildings are of a variety of materials - frame, brick and stone - and differ in scale and siting. Danboro, like the typical rural Bucks County village, sprawls out in an irregular pattern from a central crossroads with the number of historic buildings gradually diminishing, separated by modern infill or ever-widening open spaces. The crossroads is a large open space with non-contributing buildings on the southwest corner diminishing its sense of being a nineteenth century village. Danboro has a variety of building types; residences, shops, small scale manufactories, schools and religious buildings constructed by a series of artisans, small scale farmers, or mechanics which typify most small rural villages. Unlike Dyerstown the village is not clearly separated from the surrounding non-contributing buildings and open farm land.

Fountainville and Kendigtown also no longer represent distinct historic villages. While Fountainville has historic buildings on the flour corners of the intersection of Ferry Road and the highly traveled Route 313 (marked by a traffic light), there is no sense of a real village. Similarly, Kendigtown, located along Ferry Road and Gayman Road between Fountainville and Danboro, represents a cluster of four historic buildings along the north side of Ferry Road surrounded by a large number of early to mid twentieth century residences. The lack of buildings on the south side of the road in addition to the proximity of later buildings lessens any sense of a distinct village setting.

Dyerstown presents a much different appearance than the above cited villages. In contrast to the diversity of the much larger village of Danboro, Dyerstown contains nine primary buildings, eight residences and one converted grist mill. With the exception of a late nineteenth century frame residence, all the major buildings are pre-1850 stone structures located in proximity to each other in a strong village setting. With its predominantly stone houses clustered close to the road and each other, all constructed in a medium scale, and enhanced by stone walls, fences, arched bridges, and narrow streets, Dyerstown retains a distinctive and historic appearance. Unlike most small hamlets, Dyerstown did not continue to expand during the late nineteenth and early twentieth centuries. This development pattern is in marked contrast to other villages such as Danboro or Fountainville. Many nineteenth century Bucks County villages have old cores that were either expanded in a linear fashion or underwent extensive infill as lots were subdivided. Dyerstown's development virtually ceased by the last quarter of the nineteenth century. The only major construction in the last third of the century was the construction of a single residence. Adding to the village's historic appearance is the continuance of its narrow streets. The town's buildings have their original setbacks; front yards have trees and hedges. The Old Easton Road was not widened to accommodate increased traffic as was the case in villages such as Buckingham and Newportville. Instead, Dyerstown was bypassed when Route 611 was constructed well west, and beyond sight, of the village.

While the mill provided an important service to the surrounding community, the village never truly grew into a commercial or industrial center. Instead, Dyerstown developed primarily as a family compound for the Dyer family. Almost every rural Bucks County village began as crossroads village with a tavern or mill serving to attract ancillary commercial ventures. These villages would then either expand under the direction of a single individual, such as John Hulme of Hulmeville, or Stacy Brown of Brownsburg, or in an unguided manner as surrounding farmland was gradually converted to residential or commercial use at the discretion of the individual land owners. Dyerstown, despite being the focus for the extension of what was later to be called the Easton Road from Round Meadow (now Willow Grove, Montgomery County) into Bucks County in 1721, and having the earliest grist mill in the area, never developed much beyond the hamlet stage. This lack of subsequent development is unusual in that Easton Road became one of central Bucks County's most important roads. It was the primary route from Philadelphia to Easton and the upper Delaware River and also to the Durham Furnace, which was active even in the eighteenth century. As the first mill in the township and one of the first in this section of the county, Dyer's mill served not only Plumstead Township but also the surrounding areas of neighboring Buckingham and Doylestown Townships.

Activity during the period between 1763 and 1805 is chronicled in the journal kept by John Dyer (II). The fact that the site was referred to as "Dyers Town" at that early date implies the existence of an active eighteenth century village. Why Dyerstown, with a strong core of activity in the eighteenth century, failed to continue to develop has not yet been fully explained. The 1798 Direct Tax for Plumstead Township indicates that Dyerstown contained "Dyers Mill," seven small one-story stone houses and kitchens, one two-story stone house, a stone barn and a log barn. (While the village described is nearly the same size as the present one, only two of these structures are verified as standing today). However, after the turn of the nineteenth century, Dyerstown's prominent position as an industrial site quickly waned and declined in importance as the surrounding communities developed. The original mill was taken down, rebuilt and enlarged by John Bradshaw in the first decade of the nineteenth century but faced new competition when Samuel Gillingham's mill (only several miles distant in Buckingham Township) began grinding grain. A petition for Stony Lane in 1810 as the road from Dyers Road [not mill] to Penrose's Mill indicates another challenge to the Dyerstown milling monopoly. The mill continued to supply the local community through to the early twentieth century with the last miller being Charles F. Beaumont. With the exception of a store established c. 1838 by John Dyer's grandson Thomas, the mill was the only commercial activity within the village. A mid-eighteenth century tavern license application, the only one found for the village, was denied by the court. By the mid-nineteenth century, Dyerstown was outstripped in importance on the Easton Road by the newer towns of Doylestown to the south and even Danboro to the north. Dyerstown remained a small roadside hamlet even when the Easton Road became a turnpike between Doylestown and Danboro in 1842, despite the fact that Dr. John Dyer and his brothers-in-law James Barclay and Aaron Burgess all served on the turnpike's Board of Directors.

Between 1800 and 1859 the entire town, with the exception of the mill at its northerly end and the house at its southeasterly end, was owned exclusively by various descendants of the first John Dyer who constructed the original mill on the site in the early eighteenth century. In 1811 John Bradshaw, brother-in-law of John Dyer (II) sold the mill. From this point on, the mill lot ceased to be associated with the Dyer family. The mill lot and the Pine Run effectively formed the northern boundary of Dyerstown. Similarly, the house at the southeastern end of the village halted expansion in that direction. The house and a portion of its original fourteen acre lot were eventually purchased by Amos and Hester Dyer Burgess in 1829. It was during the first half of the nineteenth century that the majority of the structures comprising the present village were built (or rebuilt).

The year 1811 also marks the death of John Dyer (II). Upon his death, his real estate was divided between two of his sons. His property on the west side of the Easton Road, totaling 117 acres, was adjudged to his son John Dyer (III), and his land on the east side of the road, totaling 161 acres, to his son Joseph Dyer. The journals of John Dyer (III) contain specific details on the construction of two houses. In 1837 John Dyer (III) constructed a new house south of the mill. Six years later he built another new house and sold his previous residence to his son Dr. John Dyer. The diary states that this was the third new house he and his wife had occupied. While not specifically referenced, it is speculated that the first house kept by the Dyers (III) is a part of the large house between the above two houses. Upon John Dyer's (III) death in 1860, his new house descended to his widow and then his daughter Hester Burgess who owned the property until 1910. The remainder of his land, totaling over 97 acres, went to his son Dr. John Dyer. In 1870 Dr. John Dyer sold his property out of the family. On the east side of the road, Joseph Dyer retained the portion of his land within the district until his death in 1861. At that time, his 86 acre farm descended to his niece (brother John Dyer's daughter Elizabeth Barclay). It stayed within the Dyer family, although not in the Dyer name, well into the twentieth century.

While there may be other examples of a family continuing to stay within a village for numerous generations, the dominance of the Dyer family in Dyerstown in owning virtually every building in the village, as well as the surrounding farmland, is almost unparalleled. It resulted in Dyerstown staying a small self-contained village for well over a century. The Dyer's although important members of the community, serving as trustees for the Plumstead Meeting, Justices of the Peace, and Directors of area Turnpike Companies, did not have the desire to "develop" their town. In the early nineteenth century there was an opportunity to compete for the location of the new county seat, proposed to be moved from Newtown to the center of the county. While there was stiff competition among the three nearby hamlets, of Doylestown, Houghville and Bradshaw's Corner, Dyerstown did not even petition for the honor and the chance for extensive development potential. Dyerstown remained, and still conveys the feeling of, a small nineteenth century rural village.