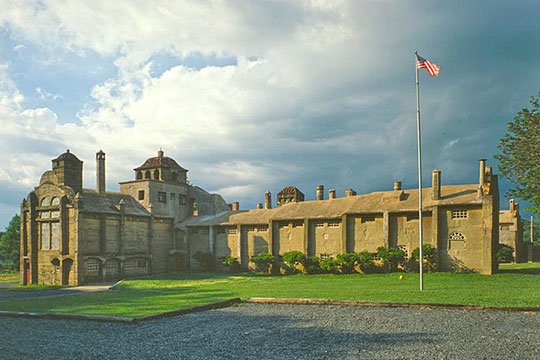 The Tile Works is part of a National Landmark Historic District often referred to as "The Mercer Mile." Included in the Landmark are Fonthill (Mercer's Residence) and the Mercer Museum.

The tile works, ... is a "U" shaped building constructed around an open courtyard. Built of reinforced concrete with concrete buttresses, approximately 120 feet by 100 feet with arcaded court, it resembles a medieval cloister. The factory is 2 1/2 stories built in tiers with towers. The gable roofs have rounded ridges of brushed concrete with steep parapets at the gable ends. The roof is a concave hip roof covered with tiles. Irregular chimneys and windows with variety of decorative tiles are set in both exterior and interior walls. There are concrete groin and barrel-vaulted interiors housing five pottery kilns. This structure replaces an earlier pottery works that burned.

The present structure, built in 1911-1912, still functions as a manufactory of mostly architectural tile.

Today, Henry Chapman Mercer (1856-1930) is regarded as a scholar who collected and preserved early American artifacts and tools, as a designer of arts and crafts ceramics and tiles, and especially as a visionary architect who was one of the first designers to work with reinforced concrete as a building material—a kind of primitive American Antonio Gaudi.

Mercer was part of that era in the 1880s and 1890s when the English Arts and Crafts movement influenced American ceramic craftsmen such as at Rookwood Pottery, American Encaustic Tiling Company, the Low Art Tile Works, and the Grueby Faience Company. It was the Centennial Exposition of 1876 that created an interest in art-industries. By the mid-1890s, tile manufacture had become a thriving American industry.

At just about this time, Mercer, an archaeologist on the staff of the University Museum in Philadelphia, decided to abandon his academic career and establish his own pottery and tileworks in Bucks County, Pennsylvania. The story of the success of the Moravian Pottery and Tile Works, as Mercer called his establishment, is quite unlike that of most other American potteries. Its founder was not an artist nor a trained ceramist. Instead, Mercer was a scholar with a wide range of interests and a sound sense of business and showmanship.

The distinctive tiles he designed and manufactured brought him world-wide fame and, as a result, a substantial fortune. With these financial resources, in addition to family money, Mercer designed and built three innovative structures of reinforced concrete: a castle-like residence for himself, a pottery and tileworks, and a museum. In addition, he became one of America's earliest and most important collectors of tools, folk art, iron stove plates, agricultural implements, rare books, manuscripts, prints, folk music, and tiles. Today the Mercer legacy is only beginning to be appreciated at all levels of scholarly inquiry.

"Although Mercer had a highly developed antiquarian interest long before he went into the tilemaking business, the impetus to actually establish a factory appears to have originated with his desire to preserve an abandoned Bucks County pottery." [2]

Apparently, it was Mercer's interest in hand crafts that led him to try to resuscitate on old local pottery. It was appropriate that architects were again using fireplaces on the house interior which created a demand for ornamental tiles.

"The name Moravian Pottery and Tile Works was appropriately chosen for this eastern Pennsylvania business which was to specialize in handcrafted tiles. Long an admirer of the folk art of the early Pennsylvania German settlers, Mercer turned to their decorated cast-iron stove plates for his first tile designs. Even more important, however, he adapted the technique of molding decorative cast iron to Bucks County clay, thereby making it possible to produce decorative fireplace, wall and floor tiles that were beautiful, unusual, and geared for a very discriminating American market. He consciously sought to achieve a rough, handcrafted effect in all of his tiles. [3]

In 1904, Mercer was awarded the grand prize for his tiles at the St. Louis Exposition.

"Recent research in the extensive records of the tileworks has revealed that Mercer tiles were used extensively in houses, churches, libraries, schools and colleges, and hotels throughout the United States and abroad. Buildings in which Mercer tiles were installed include Grauman's Chinese Theater in Hollywood, California; the Casino at Monte Carlo; the Isabella Stewart Gardner Museum and the Museum of Fine Arts in Boston; the recently demolished Traymore Hotel in Atlantic City, New Jersey; the library of Bryn Maw College in Pennsylvania; and the state capitol in Harrisburg, Pennsylvania." [4]