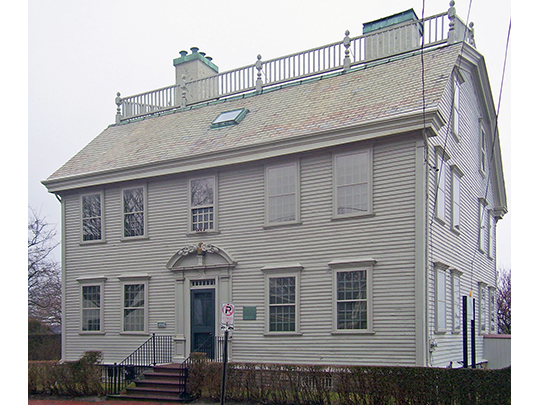 Newport was probably named for Newport, the capital of the Isle of Wight, which the island of Aquidneck, or of Rhode Island, somewhat resembles.

Newport was founded in the spring of 1639 by a small band of men under the leadership of John Clarke and William Coddington. The two latter had earlier resided in Boston, where their sympathies with the Antinomian movement had brought them into disfavor with the Massachusetts authorities. With about fifteen associates, Clarke and Coddington left Boston for Roger Williams' settlement at Providence in March, 1638. Williams helped them to purchase Aquidneck, or the Island of Rhode Island, from the Indians, whereupon the group settled first near the north end of the island, in what is now Portsmouth. With the subsequent appearance at Portsmouth of other and more numerous emigrants from Massachusetts, who succeeded under their leader, Anne Hutchinson, in gaining political control of the settlement, some of the first comers decided to locate elsewhere.

Nicholas Easton and his two sons, Peter and John, went by boat to an island in present Newport Harbor, where they lodged; naming it Coaster's Harbor Island. The other members of the company soon arrived, and all looked about for the best site of a permanent settlement. There was a swamp where Thames Street is now, so the settlers crossed over to the present Newport Beach. Fearing that this location would be unsafe for shipping, they returned to the harbor and began the town near the junction of what is now West Broadway and Marlborough Street.

On May 16, 1639, it was agreed that 'the plantation now begun at the s.w. end of the island shall be called Newport; and that all lands lying northward and eastward from said town towards Pocasset [Portsmouth], for the space of 5 miles, and so cross from sea to sea, with all lands s and w, bounded with the main sea [Atlantic Ocean], together with the small islands and the grass on Conanicut, is appointed for the accommodation of said town. It is ordered that the town shall be built upon both sides of the spring [near junction of Broadway and Spring St.], and by the sea-side, southward.'

In July, 1639, John Clarke, Robert Jeffreys, and William Dyer were empowered 'to lay out all the lands for the town's accommodation; as also all highways, with house allotments, and the disposition of several farms to the persons inhabiting.' Thames Street was the first to be planned and was made one mile long. The first house lots were laid out on the north side of Washington Square; four acres were allotted for each house lot.

In November, 1639, commissioners were chosen in Newport to treat with Portsmouth regarding a union of the two towns under a sort of federal government. The combination was effected in 1640. The two settlements agreed, in March, 1640, to be ruled by a governor, deputy governor, and four magistrates called assistants. The governor and two assistants were to be chosen from one town, and the deputy governor and two assistants from the other. William Coddington was elected as the first governor. On August 6, 1640, Robert Lenthal was invited to take up his abode in the town 'to keep a public school for learning of the youth.' This was the first school established in Rhode Island, though how long it endured is uncertain.

When Rhode Island secured its first English charter in 1644, John Coggeshall of Newport became the first chief executive of the Colony; he was called president rather than governor, and his assistants were William Coddington of Newport, John Sanford of Portsmouth, Roger Williams of Providence, and Randall Holden of Warwick.

In 1651 the people of Newport were astonished to learn that William Coddington had secured an English patent making him governor of Aquidneck. The island towns reluctantly submitted to his authority, but sent John Clarke to England, with Williams from Providence, to have the Coddington commission revoked. News of the success of this mission arrived in February, 1653, and soon after Newport and Portsmouth resumed their former political associations with the rest of the Colony on the mainland. Ten years later, John Clarke of Newport was instrumental in securing the second Colonial charter, the King Charles Charter of 1663.

Less than twenty years after the founding of Newport, William Coddington was shipping horses to the Barbados, where some were used to furnish power in sugar mills. By 1675, the island farms, which have the best soil in the State, were furnishing exports for the middle and southern Colonies, the West Indies, and Europe. Wool was sent to France in exchange for linen; horses, beef, pork, butter, cheese, and flour went to the Barbados for sugar, molasses, and indigo; and codfish, haddock, and mackerel were exported to the West Indies and southern Europe in exchange for salt, rice, and wines.

Newport early became, as did other Rhode Island towns, a haven for those who left the Mother Country or other American Colonies for religion's sake. To Newport in particular came the Quakers. On August 3, 1657, a small vessel, the 'Woodhouse,' entered Newport Harbor bringing six Friends the original apostles of Quakerism on these shores. Many influential and wealthy people on the island embraced their doctrines, among whom were William Coddington, William Brenton, and Nicholas Easton. Quakers came to hold the chief offices in the Colony; for two centuries, at least, they exerted a calm and restraining influence in local affairs.