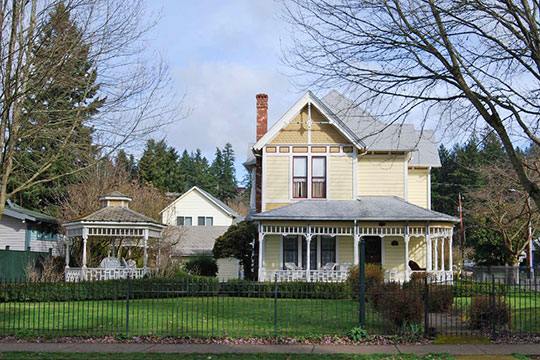 The Magnus and Emma Ek House was listed on the National Register of Historic Places in 2013. Portions of the content of this web page were adapted from a copy of the original nomination document. [‡]

The Magnus and Emma Ek House is a two-story, wood-frame, Queen Anne-style residence that was originally constructed in the Stick Style, but was remodeled shortly after its construction, adding Queen Anne elements. The house is now an eclectic mix of the Stick and Queen Anne styles. The house sits on a rectangular lot, with 74 feet fronting South Water Street, the primary north-south thoroughfare through Silverton, and 151 feet extending along Adams Avenue. The neighborhood is characterized by historic residences, some being contemporary to the Ek House, but most having been built in the decades following the Ek House's construction in 1890.

This house was constructed ca. 1890 by Magnus Ek, a cabinet maker and millwright who developed several mills throughout the Willamette Valley and operated the Johnson and Ek steam sawmill 6 miles southeast of Silverton. Magnus and his wife, Emma, lived at the house for 11 years, eventually selling the house to Martin J. Adams in 1901. Martin Adams was a cashier and later president of the local Coolidge & McClaine Bank, and was a wealthy individual who owned several properties in the Silverton vicinity. Martin Adams passed away in 1912, leaving this house to his younger brother Edward, who had lived with Martin in the house for several years along with his wife and family.

Edward and Sarah Adams lived here for several decades. The house passed through a number of hands in more recent years, undergoing renovation in the mid-1980s under the ownership of Susan Capper. The house was sold to Michael and Linda Whitmore in 2002, and they undertook further work that included the turret bathroom addition. The Whitmores sold the house to Nancy Korda in 2010. The building currently houses the Edward Adams House Bed and Breakfast.

Magnus Ek was born in Sweden in 1860 and started his career at the age of 15 as an apprentice carpenter, later traveling as a journeyman through Sweden, Denmark, and Norway. In 1882, he immigrated to the United States and worked as a cabinet maker and general carpenter for various railroad companies. He also developed skills as a millwright through work at the North Chicago Planing Mill Company. Ek worked for and assisted in the construction of a number of mills in Illinois and Iowa, and in 1885 moved to the West Coast to continue the same work. He received contracts to develop several mills in the Willamette Valley, including locations in Salem, Rickreal, and Turner, and then decided to start his own steam sawmill near Silverton. In 1890, Ek married Emma Johnson, the daughter of his partner in the sawmill business, Mathais (or Matthew) Johnson. The house at 729 South Water Street was built the year that Magnus and Emma married, and was a prominent building in Silverton at the time of its construction. The residence was one of three houses featured in the "Home Seekers' Guide," a publication intended to draw potential residents and businesses to Silverton.

Magnus Ek continued his various jobs as millwright, cabinet maker, and sawmill operator, and in 1897 filed patents for a folding crate with both the Canadian Patent Office and the United States Patent Office. In 1901, Ek purchased a Corvallis-based ice manufacturing plant and moved Emma and their three children to that town. By 1910, the Ek family, which had increased to four children, had moved to Multnomah County. Magnus Ek passed away in 1928, and Emma Ek passed away in 1956.

This house would have been a showpiece for Ek, a successful businessman who undoubtedly saw the opportunity to use his house as a showcase for not only his skill as a carpenter and cabinet maker, but also as a display for his mill's products. At the time it was built, the house was on prominent display on a road leading into Silverton from the south, and it would have been one of the first buildings seen by visitors from areas south of town.

Although the extent of Magnus Ek's involvement in the design and construction of his house is not documented, it is likely that he closely directed the work and probably did much of the construction himself. As a skilled cabinet maker, Ek probably focused much of his time on the interior work. The room that is assumed to be his study is particularly ornate. It is probable that Ek conducted business in this room, and the setting provided an ideal showcase to display to potential customers his skills as a cabinet maker and the quality and variety of lumber produced by his sawmill. For these reasons it is probable that Ek did this work himself.