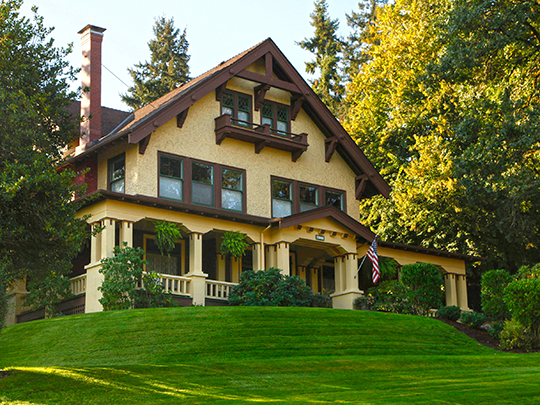 Milford was the earliest center of population and industrial enterprise in the Silverton environs. It was located two miles up Silver Creek from the community of Silverton. It is reported that in 1846, a lumber mill was established at Milford by James "Silver" Smith and John Barger. Beauford Smith was operating a sawmill on Silver Creek as early as 1852 (as he was the son of James Smith, it may have been the same mill), and a flour mill was erected shortly afterward. Later, other enterprises were begun, but the town was soon overshadowed by Silverton, which developed two miles downstream. The buildings from Milford were moved to Silverton in 1855.

It is likely that even the name "Silverton" was derived from Silver Creek. There are two differing accounts as to its origin. Some say founder "Silver" Smith (originator of the creekside sawmill) brought a basket full of silver dollars into the pioneer village, which created such a stir that the present name was selected. Others repeat the legend of a horseback traveler who forded the creek, but whose silver fell from saddlebags into the stream bed. In any case, the name "Silverton" first appeared in print in The Statesman on September 1, 1855, in a notice of taxpayers of Marion County.

The May 11, 1894 issue of the Marion County Recorder carried an editorial which extolled the growth potential of Silverton, based on its proximity to Silver Creek. The editor claimed that "few streams in Oregon present better facilities for obtaining cheap power than does Silver Creek at this point... This fact ought to be urged by persons interested in Silverton's welfare for the surrounding country is capable of sustaining a large population and manufactories are bound to come sooner or later. Fruit canneries, Woolen Mills, Creameries, Evaporators, Electric Plants..."

True to prediction, Silverton's first electric power plant, operated by Percy Louis Barron, was established adjacent to the creek (on the site of the present City Hall) in approximately 1897.

The Fischer Flouring Mill bought out the Oregon Milling Company in 1930, which had been located on the site of the present City Hall parking lot. The mills consisted of a cereal, flour, and feed mill, and were powered by electricity produced by a dam which Hubbs' Sash and Door Factory had constructed in the early 1900's. A portion of the old dam may still be seen in the creek bed slightly north of the City Hall site.

The physical layout of Silverton owes its shape and axis to the existence of Silver Creek. The only streets named on the original plat were Water and Main Streets, Water Street running along the creek, and Main Street intersecting at a ninety degree angle to Water. A covered bridge crossed the creek at Main Street. It was replaced with a steel bridge in 1910. According to the 1890 Sanborn map, the majority of early Silverton businesses located on Water Street, backing on the creek. (Three of the buildings that located there for utilization of the water power are still in existence, and are included in the district.) The most desirable building location was the corner of Water and Main streets, near the bridge. The next wave of buildings extended up Main Street, with the Wolf Building anchoring the northeast corner of Water and Main. In the early days, there was a giant oak tree near the intersection of Main and First Streets, but in the 1890's the tree was cut down, probably indicating that even at that early date Main Street traffic was heavy enough to make the presence of such a tree a hindrance to smooth traffic flow. Today the creek still serves as a point of reference in the town. It is the dividing line between East and West Main Street. Main Street is the main street because it is the only street in the downtown core that crosses the creek. Main Street serves as the divider between the north and south portions of the north/south streets.

Silverton's evolution from a small town supporting several small mills to the largest lumber producing city in the Willamette Valley would not have been possible without adequate rail transportation. The groundwork for this rail network began to be laid in the 1880's, when a narrow gauge railroad was built without the aid of the Federal Land Grant, to serve the areas missed by the large Oregon and California Railroad Company.

During 1877, a small group of farmers from Sheridan, Willamina, Perrydale, and Dallas were finding it impossible to compete with their counterparts along existing rail lines and waterways. They decided to take action, and incorporated the Dayton, Sheridan, and Grande Ronde Railroad Company. The company purchased rolling stock and metal fastenings and constructed 20 miles of narrow gauge trackage from Sheridan to Dayton on the Yamhill River. They intended to lay more track, but a San Francisco firm which had furnished construction materials foreclosed on them. A group of Scottish capitalists headed by William Reid took over the company and renamed it The Oregonian Railway Company, Ltd.

Between 1878 and 1882 The Oregonian Railway Company, Ltd. laid 183 miles of narrow gauge track from St. Paul, through Silverton, and on to Coburg. The first spike of this line was driven at Silverton.

After 1886, The Oregonian Railway Company, Ltd. merged with the Southern Pacific Transportation Company. The new company converted the trackage to standard gauge and used it for feeder service to their own operations. By the 1920's, twenty to thirty carloads of logs a day were coming in to Silverton from other parts of the Willamette Valley for processing at the Silver Falls Timber Company Mill. The Southern Pacific Depot employed a log sealer who was responsible for scaling all the logs that came in.

The other major Silverton industry to use the rail line was the Fischer Flour Mill. They constructed a feeder line from the mill up Water Street, tying in with the main line near the depot. They shipped cereal, flour, and feed on this line.