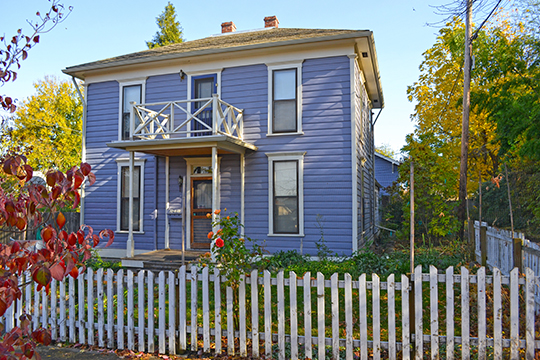 The Nils Ahlstrom House is listed on the National Register of Historic Places in 1980. Portions of the content of this web page were adapted from a copy of the original nomination document. [‡]

The Nils Ahlstrom House (248 5th Street) was constructed in 1888 as a private residence for a railroad worker and his family. The house is simple in plan, with a large rectangular main block with short wing added at the rear forming a T shape. The two story structure is finished simply on the exterior and exhibits modest Classical Revival details. It's builder was John Fruhan, an Ashland workman of the period. Always used as a private residence, the Ahlstrom House has served as a rental for the past several years. It is currently in fair condition; most of the changes needed are to rehabilitate the house after years of renter neglect and abuse of the surfaces; walls, floors and ceilings.

Located in the Railroad Addition to Ashland, Oregon the home is an excellent example of the kind of dwelling that housed railroad workers of the late nineteenth century. Standing about one half-block from the Depot, the Ahlstrom House is one of the earliest constructed after the completion of the route between Portland and northern California.

Nils Ahlstrom, a conductor on the Railroad route, came to Ashland for his work, and is not particularly distinguished as an individual citizen but as a representative of hundreds of men who arrived in the community for the same purpose. He purchased his lots six months after the driving of the Golden Spike in December, 1887 and John Fruhan, a local contractor was at work on the Ahlstrom House by October 1888.

The Nils Ahlstrom House is located on 5th Street in Ashland, which ends a half-block from the house in front of the Depot. It's proximity to the railroad complex is accentuated by a large empty lot which stands between the Ahlstrom House and the railroad. The disposition of this lot is critically important in what Ashland calls the Railroad District. An old home, which can been seen in the historic photographs accompanying this application, is no longer there.

In the early 1880's, as the track approached Jackson County, the area prepared for a new beginning. Immigrants arrived who knew the economic benefits the railroad would bring. The diary of Abel Helman, on whose donation Land Claim Ashland began, reflected the excitement and attention given the coming of the "cars" in the spring of 1884.

Most of the railroad stations were placed around the valley with little reference to the old communities and several new towns were founded. Woodville, Gold Hill, Central Point, Talent and Medford suddenly became busy centers of commerce and residence. On its first anniversary Medford counted four hundred new residents and by 1890 has almost a thousand citizens.

Ashland grew quickly. Business sales doubled in 1884 and many new houses went up. The town acquired a water system, electric lighting, a modern hotel, and Siskiyou Boulevard; and doubled its population by the end of the decade. The largest increase in people and improvements happened just after the driving of the ceremonial spike in December, 1887. On January 6, 1888 the local paper announced that railroad lots were being sold rapidly. By the end of the year lot sales would total $36,995.00. At the end of January the ice house was finished, and in February the carpenters had almost completed a large dining room for the Depot. On May 4, 1888 the Daily Tidings reported the building of a Depot Hotel. On July 13, 1888 Nils Ahlstrom, like so many other workers, invested in his new home near the railroad, and purchased five lots in Block E.

On October 2, 1888, the Ashland Daily Tidings announced the "Mr. Ahlstrom's two story dwelling on 5th Street was raised this week ..." At the beginning of 1889 when the paper printed its annual report of building projects finished within the year, Nils Ahlstrom's new house was included.