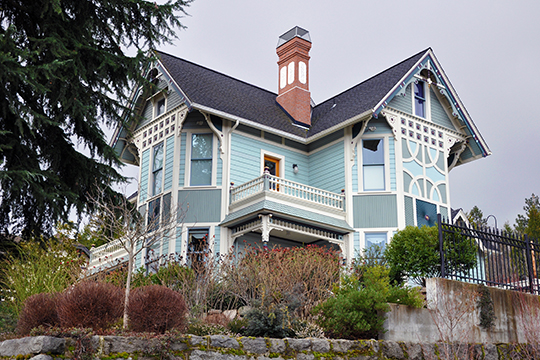 The Siskiyou-Hargadine Historic District was listed on the National Register of Historic Places in 2002. Portions of the content on this web page were adapted from a copy of the original nomination document. [‡] .

The Siskiyou-Hargadine Historic District, one of the oldest residential districts in the City of Ashland, Oregon, contains a substantial number of significant and largely intact dwellings that accurately reflect their development history.

Since its first development beginning ca. 1888, the Siskiyou-Hargadine Historic District has been shaped in large part by speculators and developers, many of whom were longtime residents with prominent positions within Ashland's business community. Unlike the residential areas of the Original Town that included Granite, Church, Laurel, High streets (and others) above the city's commercial core, the neighborhoods that radiated out from Siskiyou Boulevard were almost all developed at the same time and developed as orchard and residential tracts over a period of years. In some instances area developers, notably Baldwin Beach and C.H. Veghte, also built the structures within their projects. Most of the district's residential neighborhoods were initially developed with a few homes on sizable parcels and remained that way for several years. Later, as development pressures and the need for housing grew, these larger parcels were partitioned into smaller and smaller lots as later generations of the early buyers sold long-held family property.

Between 1900 and 1910, when Ashland experienced a population boom, some property owners of generally modest circumstances built several rental properties that generated income, a locally distinctive development pattern precluded in other Ashland neighborhoods by the more modest size of the original lots. Amos Keller, Southern Oregon Pacific Railroad conductor owned at least four rental houses in the district, not counting his own home. Alex McLeod, a retired working man, managed to build or acquire at least three rental properties between 1900 and 1910, and also lived in the district. Later, in the years surrounding World War II, investors such as Wells D. and Anna Jackson would control large numbers of single family residential units for rental purposes. Taken together, this pattern of early agricultural developments with a single large home and its subsequent infill and the development of single family dwellings for use as rentals and investments, form two major elements of the district's history. The vernacular and generally modest dwellings that derived from this pattern, countered by larger and generally more elaborate structures built by local merchants and the developers themselves, continue to shape the character of the Siskiyou-Hargadine District today.

Development in the Siskiyou-Hargadine Historic District began in the mid-1880s as landowners like Baldwin Beach and the Hargadine family divided their large holdings into tracts and sold residential lots to prospective builders or developed dwellings for rental or resale themselves. Expansion within the district intensified in 1888 with the construction of Siskiyou Boulevard and the platting of new additions to the City both north and south of the thoroughfare. These new additions included the Carter and Summit Additions, Hunsaker's Addition, Highland Park Addition, the McCall, White and Miner Additions, as well as Pracht's and Pracht's Alaska Additions. Initial development in many of these areas, particularly in the hillsides above the Boulevard, often continued with larger tracts that were first developed as orchards and only later partitioned and converted to residential use.

The greatest portion of the District has consistently been residential in character with contributing houses in the area ranging in date between 1884 and 1951. In the early years of the District's history, many dwellings, particularly along the Boulevard, Vista, and Gresham Street, were constructed for prominent Ashlanders, be they business owners, professionals, or elderly pioneers associated with the city's early development. In many cases these individuals owned property under development in the area in addition to residing within. Typical of this latter trend are the several members of the Carter Family, who built three fine dwellings in the area but also developed both the Summit Addition and the H. B. Carter Addition.