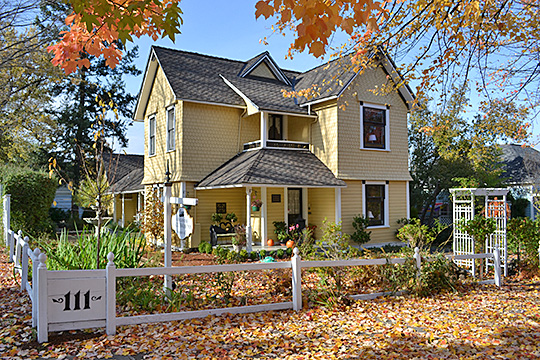 Ashland is located at the south end of the Bear Creek Valley in Jackson County, Oregon. Although explorers and trappers passed through southern Oregon between 1825 and 1850, no permanent residents settled in the area until gold was discovered near the present site of Jacksonville in early 1852. At the same time, the Donation Land Claim Act of 1850 encouraged families to seek free, farmable land in the Oregon country. Jackson County was officially designated by the Oregon Territorial legislature on January 12, 1852.

During the first week of 1852 several miners-turned-settlers crossed the Siskiyou Divide and stopped on the banks of what they soon called Mill Creek, now Ashland Creek. Here they built a sawmill, flour mill, boardinghouse and simple frame dwellings. The Oregon-California Trail passed near the small settlement and soon the route made a permanent loop in front of the flour mill. By 1877 the small community of Ashland Mils had a post office, hotel, store, cabinet shop, livery, blacksmith shop and several homes in addition to the flour mill and sawmill. Construction of a woolen mill and a college augmented local opportunities, but farming and ranching supported the town's economic base.

Ashland's commercial district expanded gradually around the clearing in front of the flour mill and residential neighborhoods developed nearby on Granite and Church Street, as well as on Main, Pine (Helman) and Oak Streets. Ashland was incorporated as a town on October 13, 1874, and by 1880 counted 842 residents.

In the early 1880s Ashland, along with all of Jackson County, eagerly awaited the Oregon and California Railroad as it pushed over the mountainous passes south of Roseburg, which had served as the line's southern terminus since December 1872. In October 1883, Lindsay Applegate sold 156.75 acres to the north of Ashland's Original Town Plat to the railroad company and the company's surveyors began to survey a major addition that would double Ashland's size.