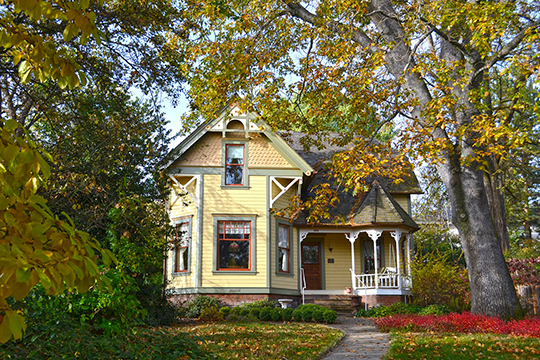 The H. L. Whited House (321 North Main Street) was listed on the National Register of Historic Places in 1998. Portions of the content of this web page were adapted from a copy of the original nomination document. [‡] Adaptation copyright © 2016. The Gombach Group.

The one-and-a-half-story Queen Anne Cottage built in 1898 by local contractor C. H. Veghte for the family of H. L. Whited in Ashland, Oregon occupies a narrow tax lot of a quarter of an acre which fronts on Main Street near the town center. The house is a locally outstanding example of Queen Anne architecture of cottage scale that was undoubtedly inspired by pattern book sources and which is the only house of its type in the historic railroad community which incorporates an octagonal tent-roofed belvedere in the veranda.

It was built for the retailer and real estate investor, Harry L. Whited, whose Midwest ties remained strong during his years of residency in Ashland. Ashland's cultural resource inventory lists the H. L. Whited house as a historic structure of primary rank. The construction of the residence occurred at a point in Ashland's history where growth had been rapid, swelling from 842 residents in 1880 to an estimated 3,000 in 1900.

Harry Whited and his wife Bertha resided in Ashland during its heyday as a railroad town. Whited was a native of Iowa, having been born there in 1866, and his wife was from southern California. Mrs. Whited's father, W. B. Colton, was Mayor of Ashland in 1899 and 1900. The 1900 souvenir edition of the Ashland Tidings states that "Ashland has shown a more marked growth the past two years than any other place in Southern Oregon." The H. L. Whited House was featured, along with other Ashland residences, in that souvenir publication as an indicator of Ashland's flourishing status. Mr. Whited operated a successful jewelry store in the downtown, and in due course acquired a considerable amount of local real estate. Numerous references are made to the Whited family's social prominence in Tidings issues from 1896 to 1919. In the latter year, the Whiteds removed to Los Angeles.

Harry Whited purchased the lot upon which the residence sits from Elizabeth Thornton in March of 1898. That week the Tidings noted that Whited had made the purchase and was planning to build. In July of 1898 the newspaper reported that "Ashland's Building Boom Grows Apace. H. L. Whited this week let a contract to C. H. Veghte to build for him a neat one-and-a-half story residence on his lot on North Main Street, adjoining James Thornton's."

C. H. Veghte was an active contractor in Ashland and a significant real estate investor in his own right, developing numerous residential rentals in the early 1900s. His father-in-law, Benjamin Beach, was a locally prominent builder responsible for the registered Benjamin Beach house and several other historically significant residences along the Beach Street addition he created in the 1890s.