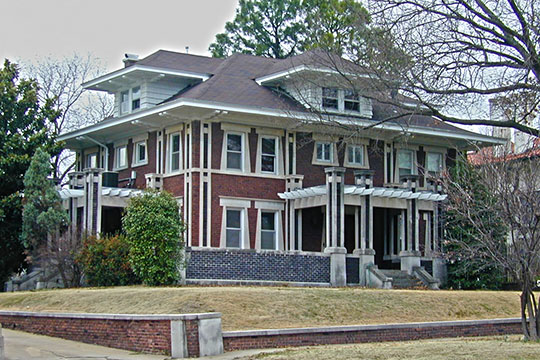 The Kendall Place Historic District was listed on the National Register of Historic Places in 2005. Portions of the content on this web page were adapted from a copy of the original nomination document. [‡]

The Kendall Place Historic District clearly illustrates the evolution of middle- and upper-middle-class residential development and architecture during Muskogee's periods of prosperity — the period of early growth (Allotment/Railroad Period 1898-1912) and its later growth period (New Deal/War Period 1937-1950). More importantly, the socio-economic profile of Kendall Place residents remains constant from decade to decade, as middle- and upper-middle-class citizens chose to reside close to downtown in a well-known, desirable neighborhood with housing stock maintained in good condition.

While Kendall Place Historic District is closely entwined with Muskogee's historical development and periods of economic growth, the neighborhood maintains its own distinct physical features, topography, functions, and land use, which make it a distinguishable entity. The District conveys its unique history and architectural associations that not only reflect economic and physical development patterns, but also the notable location in which it developed. Long associated with Kendall College and the area surrounding it, the neighborhood has a distinct identity. The boulevard landscaping, the house settings, and the generous lots and setbacks create the physical context for a predominately upper-middle-class neighborhood. Because the Kendall Place Historic District continues to retain a high degree of integrity of historic setting, design, materials, and workmanship, it successfully conveys feelings of its period of development and significant associations with community development and architecture.

The properties within the Kendall Place Historic District retain a high degree of integrity with 91 of the 108 resources contributing to the significance of the District. Overall, the District has a significant group of Late Victorian, Late Nineteenth and Twentieth Century Revivals, and Late 19th and Early 20th Century American Movements styles (82) that comprise 76 percent of the District's 108 residences. While these styles occur elsewhere in Muskogee, the District is significant as a collection of these styles as executed in the houses erected for the middle- and upper-middle-class residents of Muskogee during the town's periods of growth.

The eighteen houses in the District (16 percent) built between circa 1898 and circa 1914 provide examples of Late Victorian style residential architecture. These include nine Folk Victorian houses, seven Queen Anne style houses, and two Shingle Style houses. The majority of these houses date to a period of construction prior to 1910 and their presence several blocks west of downtown reflects their proximity to Kendall College when it was still open. As noted previously, the location and setting of the college was an attractive amenity in attracting residential development in the surrounding area. After the college moved in 1907, these early houses, dating from the Territorial Period to the early years of statehood, reflect changing preferences in Victorian designs seen across the country.

Porches are significant elements in all Late Victorian style houses, and are particularly noteworthy on the Queen Anne style house. Characterized by their complexity, Queen Anne houses have irregular and sometime quite large massing; a great variety of windows and sheathing materials; complex roof shapes; large porches; and filigree decoration on porches and eaves lines. The two Shingle Style houses in the Kendall Place Historic District share wide porches and asymmetrical forms with the Queen Anne style, but their decorative shingled wall surfaces and smaller massing distinguishes them.

A variety of architectural styles, defined by Virginia and Lee McAlester as "Eclectic Houses" erected from 1880 to 1940 dominate the Kendall Place Historic District. Sixty-three percent of the buildings in the District fall into the Eclectic house stylistic category. They include "Late 19th and 20th Century Revivals" such as Colonial Revival (30); Tudor Revival (5); Classical Revival (2); and Mission/Spanish Revival (2) architectural styles. Eclectic Houses also include "Late 19th and Early 20th Century American Movements" style houses. Those found in the District include Craftsman (23) and Prairie School (6) style sub-categories.

One sub-category of Eclectic Houses can be described as period revivals. For these houses, architects and contractors drew inspiration from a broad spectrum of architectural traditions, including Classical, Medieval, Renaissance, and Mediterranean antecedents. These period revival designs stressed relatively pure copies of these prototypes as originally built in different European countries and in the New World colonies. While period revival designs appeared first in the late nineteenth century as houses for wealthy clients; after World War I, period revival styles dominated mainstream residential design. Changes in construction technology enhanced the pervasiveness of the styles, such as the ability to veneer wood-frame construction with brick, stone, or stucco, enabled period houses to dominate architectural fashion during the 1920s and 1930s, regardless of house size or cost.

The most popular Eclectic style in the Kendall Place Historic District is the Colonial Revival style. During the early twentieth century the formality of Colonial Revival architecture expressed a certain air of dignity that appealed to upper-middle-class home owners. The style was a visually accessible version of the original Colonial architecture and provided the appearance of stability and achievement in modern life. It reflected the politically conservative movements in American history during the early twentieth century. Echoing the American past and national patriotism, the style had special appeal during the post-World War I years of the 1920s.

Another popular sub-category of the Eclectic houses was the Craftsman (Craftsman/Bungalow) style house. Houses designed in the Craftsman style or with aspects of the Bungalow form were almost as popular as the Colonial Revival in the Kendall Place Historic District. These styles represented very different influences than the Colonial Revival dwelling. One of the most popular house types constructed nationally between 1900 and 1930, construction of Craftsman houses and bungalows reflected the influences of the English Arts and Crafts movement, oriental wood architecture, and an American social movement to improve housing. Concerns about health and safety issues often resulted in fireproof construction, electric wiring, indoor plumbing, and modern kitchens outfitted with gas ranges. In contrast to the more formal definition and function of space in a Colonial Revival house, Craftsman/Bungalow houses served increasingly informal living patterns that coincided with the rise of the middle classes. Homes featured built-in cupboards for quick access to convenient storage and cozy inglenooks for family gatherings. The image of the Bungalow home was one of comfort with a focus on the family and up-to-date conveniences. Homeowners liked their simple plans and large porches, which created an outdoor room in temperate climates — designs that took advantage of natural sunlight and ventilation, and emphasized comfort.

Together, Colonial Revival style houses and Craftsman/Bungalow dwellings make up nearly 50 percent of the housing stock in the Kendall Place Historic District. The Colonial Revival houses and other period revival style dwellings conveyed the feelings associated with political and economic stability, while the Craftsman/Bungalow dwellings embraced modernity and practical comforts—shared desires of the American public in the early twentieth century.

The Great Depression in the 1930s brought about a compromise between the highly articulated architectural period style residences and the stylized Arts and Crafts residences popular in the previous decades and the more subdued expectations brought on by hard times. House designs became simpler and less ornate. Designers followed historical precedent less rigidly. Within the Kendall Place neighborhood, as in many neighborhoods, construction dwindled during the Great Depression and World War II; however, in the immediate post-war era, the neighborhood continued its natural progression toward completion. When construction resumed in the Kendall Place Historic District after the war, popular housing preferences reflected a shift from house designs based on historical precedents to housing styles based on Modern architecture, which was just beginning to appear in the United States before the start of World War II. Just as Colonial Revival and Craftsman/Bungalow style houses were popular in the neighborhood thirty years earlier, Ranch Style houses became the dominant architectural style in the neighborhood in post-war years. Erected on available lots, these simply constructed houses retained the well-established setbacks of the neighborhood. In one instance, a new ranch house was built on a lot previously occupied by an older house. Regardless of the period, the neighborhood continued to attract residents of a similar demographic profile, the majority of which were professionals with upper-middle-class incomes.

Homebuilders erected eight Modern style houses in the District — four in the Minimal Traditional style and four in the Ranch House style — just after the end of World War II. The Minimal Traditional house, the style of choice for many in the years immediately after the war, was a pared-down version of the Tudor Revival. The one-story house had multiple roof gables, but with shallower pitches. A large masonry chimney continued to dominate the primary facade, but had a stockier form. In general, the Minimal Traditional house melded design features characteristic of the earlier Tudor Revival dwellings with the horizontal form and low massing of Bungalow and Prairie School style houses. The large Ranch Houses that dominated new residential construction in the 1950s extrapolated this trend one step further. All sense of vertically disappeared, yielding a sprawling one-story horizontal plan with wide eaves that seemed to hug the ground. The District's generous lots accommodated the construction of these lower and wider designs. While these houses retained the front yard setbacks established earlier in the century, their distinctly lower forms and smaller massing represented a natural progression of architectural styles.