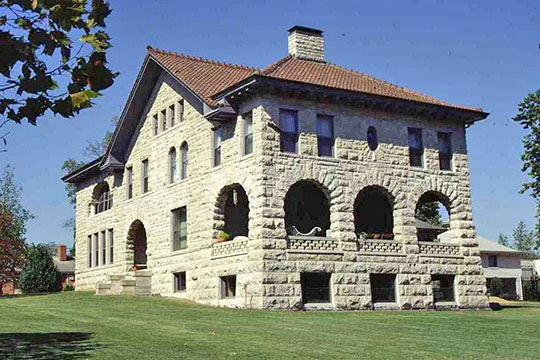 Muskogee developed around the confluence of 3 rivers: the Arkansas, Grand (Neosho) and Verdigris.

The Muskogee area is at the junction where the Grand (Neosho), Verdigris, and Arkansas Rivers flow together and which is known as the "Three Forks" region. The area first attracted Euro-American settlers in the late eighteenth century as part of the fur trade. As part of the United States policy for removal of Native Americans to what became known as the Indian Territory, groups of the Cherokee and the Creek Nations, populated the area following their removal from Alabama and Georgia in the 1830s. By the 1850s, plantations scattered in the lower Arkansas River valley near Muskogee relied on slave labor to produce cotton, corn, wheat, and fodder crops and to raise livestock. The Civil War destroyed the local agricultural economy, and the area became depopulated as residents sought refuge in more stable areas in the states to the east Agriculture did not recover once the war was over. The marginal plantation system depended on slave labor and, following the abolition of slavery, was no longer economically viable.

The Muskogee area did, however, benefit from its location near important east-west military and overland freight routes that connected the military forts on the western Great Plains during the Civil War. A trail from central Missouri to Texas passed through what became the community of Muskogee. Missourians called this route the "Texas Road," while Texas cattlemen driving herds to Missouri called the same trail the "East Shawnee Trail."

Construction of a railroad station for the Missouri, Kansas and Texas Railroad (Katy) in 1872 created the town of Muskogee on a railroad alignment that followed the Texas Road/East Shawnee Trail. The railroad depot was within lands ceded to the Creek Nation by the United States government. This meant that white settlers could not own land in the area. As a result, the railroad did not follow the common practice of surveying and establishing a town site. Despite the lack of surveyed streets, blocks, or city lots, Euro-American merchants and settlers came onto the Creek lands and developed their own town plan, organizing their buildings to conform to the commonly accepted grid plan. The ad hoc plan acknowledged the importance of the railroad in the fledgling community by orienting the layout to the angled path of the railroad rather than along cardinal axes.

The arrival of the Katy Railroad provided convenient access to regional and national markets and agriculture once again moved from a subsistence level to becoming a viable component in the local economy. Cotton, hay, and corn became the area's main crops. The railroad's direct access to larger markets also heightened the importance of cattle ranching; and both Creek and Cherokee tribal members, as well as whites who held citizenship through marriage to tribe members, controlled ranching in the area.

Muskogee's early history is strongly tied to its role as the federal government's headquarters in the Indian Territory. It was the location of the United States Indian Affairs office in the region and became the first United States District Court for Indian Territory during a critical period when important political and legal actions supplanted Creek tribal autonomy through a series of laws that changed land ownership. In 1890, passage of the Organic Act created the Oklahoma Territory. This allowed the organization of functional government in the central areas within Native American held lands. The area became a quasi-territory of the United States, and Muskogee, the location of the district court, was its de facto territorial capital.

A few years earlier, the Dawes Act of 1887 made possible the allotment of lands originally assigned to Native Americans to transfer to non-Native Americans. Against the wishes of the tribes, the Dawes Commission began the task of land allotment in 1893. By 1894, the Commission's headquarters were in Muskogee. Through the re-allotment process, the Dawes Commission redistributed ownership of land by assigning small parcels of the commonly owned tribal lands to individual tribe members. Each typically received 160 acres. The intended goal and resulting effect was to free up thousands of acres for allocation to white settlers. To further reduce the ability of the tribes to manage their own affairs, the Curtis Act, passed in 1898, abolished tribal laws and courts. It also allowed towns within Indian Territory with a population of two thousand or more to incorporate.

Muskogee was one of these towns and with appropriate legal status and occupying land excluded from the Creek allotment, the town officers ordered an official survey and platting of the town site in 1899. That year, a fire burned most of the downtown, and the town layout and grid were realigned to follow Main Street and the Katy Railroad tracks.

The federal laws passed during this period were essential to Muskogee's future. For example, the Organic Act clearly signaled that the Indian Territory would eventually become a state; and over the next decade, large numbers of settlers came to the territory. Most arrived in established towns, such as Muskogee, where economic opportunities were most attainable. However, federal laws prohibiting encroachment on lands owned by Native Americans were not enforced, and the new homesteads established on these lands continued to undermine tribal authority.