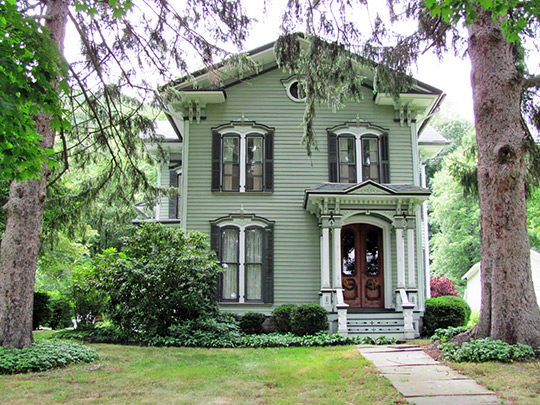 The Henry C. Myrtle House was listed on the National Register of Historic Places in 2014. Portions of the content on this web page were adapted from a copy of the original nomination document. [‡]

The Henry C. Myrtle House presents an Italianate architectural style with a centered, two-story gable front-facing cross plan and is constructed of wood clapboard. The house is located at 7663 County Route 13 in the Town of Bath, just 2.7 miles north of the Village of Bath, Steuben County, New York. Constructed for Henry C. Myrtle from 1876 to 1879, the house and outbuildings retain their original craftsmanship and character defining architectural elements consistent with the Italianate style, such as tall, narrow windows with elaborate lintels and a low-pitched roof with wide overhanging eaves and decorative brackets. The main house and outbuildings sit on a lot of approximately three acres, with part of the lot extending up the wooded hill directly behind the house. The lot contains a driveway that allows access from County Route 13 to the north side of the property. Once part of a larger farm, which consisted of approximately 283 acres, four tenant houses and twenty various farm buildings; the Myrtle House was sold out of the family in 1948 and was divided from the rest of the farm acreage in 1967. The property division in April of 1967 consisted of the main Myrtle residence, barn, outhouse, and chicken coop. The Myrtle House and outbuildings have a high level of integrity due to the period character defining features still evident in the residence and the historic fabric remaining in all of the buildings.

While several houses in the town were constructed in a similar style, the Myrtle House was one of the few extant buildings that retained all of the original features and intact outbuildings, largely due to the property remaining in the Myrtle family until 1948. This house is, therefore, an intact representation of a rural working-class farmhouse in the Italianate style popular at the time it was constructed. The architectural design and decorative embellishments of the Myrtle residence conveyed the aspirations of an emerging affluent, agriculture-based, middle-class life-style in Western New York at the close of the 19th century. The choice of a fashionable Italianate residence indicated a level of success resulting from Myrtle's important position as a prominent farmer in the town of Bath. As rail lines expanded, Western New York farmers were able to get their crops to market more easily. These early farmers had a steady income and became more active in the face of market fluctuations, which afforded them more influence in their communities. With hard work and judicious management, farmers such as Henry Myrtle were able to build residences and fulfill their self-image of success. In keeping with the desire to display an upper-middle class image, Henry C. Myrtle chose impressive details for his newly expanded home: handmade plaster ceiling medallions, finely carved curved main staircase and the intricately embellished bronze door knobs/plates. By choosing such design elements, Myrtle's house represented his upward mobility from the agricultural class to the contemporary urban leisure classes in the nearby village of Bath, New York.

In 1791, American financier Robert Morris sold 1,246,569 acres of the lands formerly known as the Phelps and Gorham Purchase to Sir William Pulteney, a landed capitalist in Great Britain. Pulteney hired a land agent, Colonel Charles Williamson, who settled in the area that became the village of Bath, established in 1793. Williamson named both the town and the village after Pulteney's home town of Bath, England. Situated along the banks of the Conhocton River and surrounded on three sides by hills, Bath's abundant supply of timber made it an ideal location for sawmills and the lands within the valley proved perfect for farming.

Many New England settlers moved into the central and western portion of New York State after the Revolutionary War. Agriculture was a primary pursuit of early Steuben County settlers. The land surrounding Bath was excellent for producing wheat. Beer's 1873 Atlas of Steuben County listed 102 farms in the town of Bath. Before the opening of the Erie Canal in 1825, Bath enjoyed a favorable location in Western New York. The Conhocton River is a tributary of the Susquehanna River, once a vital waterway that enabled farmers to ship their goods to wider markets. While the Erie Canal hampered the development of Bath by diverting economic activity elsewhere, the coming of the railroad re-stimulated its growth, particularly in the agricultural sector. Once the Erie Railroad was completed, connecting the Hudson River and Lake Erie in 1851, it was hailed as the "Works of the Ages." Another long awaited project was the completion of the Bath & Hammondsport Railroad (B&H) in 1875. These railroad projects gave farmers the ability to develop profitable markets for crops from Bath area farms. This later led in the 20th century to "farm to market" roads, which allowed milk and feed trucks access to farms year round.

After the settlement of Bath, the farms north of the village were grouped together by Col. Charles Williamson who named it Marengo Farms. By the late 19th century, the land was divided and became known as Brundage property, named after the Brundage family. Henry Myrtle purchased his farm from William Brundage. The land was used for crops such as wheat, apples, corn and livestock and Myrtle built a substantial residence along what later became County Road 13, just north of the village.